What happens when aerospace and automotive engineers put their smarts together to rethink urban mobility? They think air and ground and imagine Pop.Up, a multimodal passenger transport concept that makes full use of the urban transportation space.
You'd be tempted to dream of a better way to get from A to B if you spent long hours stuck in your car in Los Angeles. According to traffic analytics firm Inrix, City of Angels dwellers spend a whopping 104 hours a year in traffic hell, trudging along day in and day out at less than 65 per cent of the free-flow speed.
In fact if you live in the US, a country built around cars as the main means of urban transportation, you're likely to waste a good deal of time in gridlock.
Yet the problem extends well beyond America. Urbanisation is one of the world's steadiest trends and has led to the emergence of megacities, defined as cities with more than 10 million inhabitants. Studies suggest that by 2030, there will be 41 megacities worldwide, with more than 5 billion people living in cities.
Pop.Up
Modular air and ground passenger concept
The reality of today's congested cities suggests we step out of our cars for a moment to dream up a more sustainable urban transportation system. So was the thought process of a handful of Airbus engineers, who teamed up with automotive engineers and designers at Italian design company Italdesign to start thinking about urban mobility in a whole new light.
The aerospace and automotive experts collectively asked themselves the million-dollar question: what kind of model would allow us to sustainably move thousands of people around a city every day? The answer they came up with was a radically smarter, emission-free, multimodal and modular concept to get from A to B in cities - an approach that the two companies unveiled in March. Dubbed Pop.Up, the ingenious modular air and ground passenger concept vehicle consists of three main components:
The modus operandi is simple: passengers plan their journey and book their trip via an app. The system automatically suggests the best mode of transport according to trip specifics and passengers' preferences. The capsule transforms into a city car by simply attaching to the ground module. When roads are congested, the capsule disconnects from the ground module and is carried by the air module, becoming a self-piloted urban air vehicle that avoids roads altogether. Once passengers reach their final destination, all of Pop.Up's components autonomously return to a dedicated charging station where they await their next customers.
An integral part of cities
With the technical experts at Airbus, the team aimed for a realistic and scalable system that would democratise the availability of the city sky. Italdesign CEO, Jörg Astalosch says "When we designed the concept, we always had in mind its accessibility to a wide public. The beauty of Pop.Up is that it could be an integral part of cities' existing public metro or tram transport systems or integrate seamlessly into a future one. For example, the passenger capsule could easily be designed to be compatible with hyperloops."
Sound too good to be true? Perhaps, but not for long. "While Pop.Up relies on future technologies that are not yet mature enough, such as electric propulsion and sense-and-avoid technology, the basic idea of the vehicle is feasible," said Marius Bebesel, head of the CityAirbus demonstrator and a contributor to the project. "Airbus is already working on real demonstrators, which will be flying in the next couple of years, to explore and mature the required technologies. Vahana is one concept, and CityAirbus is another," Bebesel explains.
Electric VTOL vehicleVahana, led by Airbus' Silicon Valley innovation outpost, A3, is a single-passenger self-piloted electric vertical take-off and landing (VTOL) vehicle, while Airbus' CityAirbus demonstrator is a multi-passenger electric VTOL vehicle.
"Pairing up with industrial and design innovator Italdesign allows us to harness their creativity to help us find the ideal way to design a VTOL vehicle that is optimised for the best possible use of air space, city infrastructure and battery power," says Mathias Thomsen, general manager, urban air mobility at Airbus.
"The design exercise with Italdesign combined with our ongoing technology demonstrator projects are all helping us move forward to converge on the ultimate - and potentially modular - urban vehicle," adds Thomsen.
The Airbus team worked closely with Italdesign to ensure that Pop.Up's aeromechanic design, propulsion system, architecture and sensor concept were all realistic. "Technically speaking, Pop.Up is very close to something that could be produced. However, this is a concept vehicle. For something like this to fly one day, the certification aspect for both air and ground would need to be addressed," highlights Bebesel.
A closer look at the main components
While Thomsen firmly believes that adding the third dimension to multi-modal transportation networks will without a doubt improve the way we live and how we get from A to B, "realising a step change in urban mobility is a massive undertaking," he underscores. "It requires a joint reflection on the part of both aerospace and automotive sectors, alongside collaboration with local government bodies for infrastructure and regulatory frameworks." 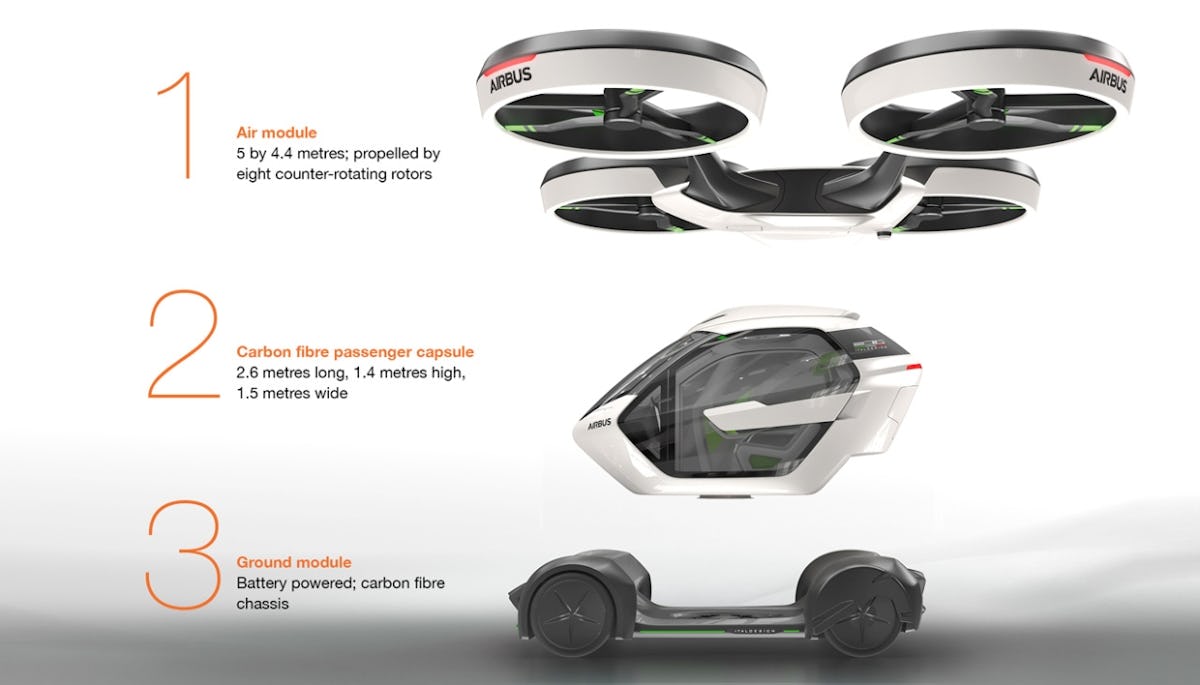 For Astalosch, cross-industry collaboration is at the crux of sustainable future urban mobility. "Today, automobiles are part of a much wider eco-system: if you want to design the urban vehicle of the future, the traditional car is not the solution for megacities. You also have to think about sustainable and intelligent infrastructure, apps, integration, power systems, urban planning, sociology and so on."
"In 10 years, ground transportation will move to the next level," concludes Astalosch. "It will be shared, connected, autonomous, multimodal and, most importantly, make use of the third dimension."
Source and images: Airbus