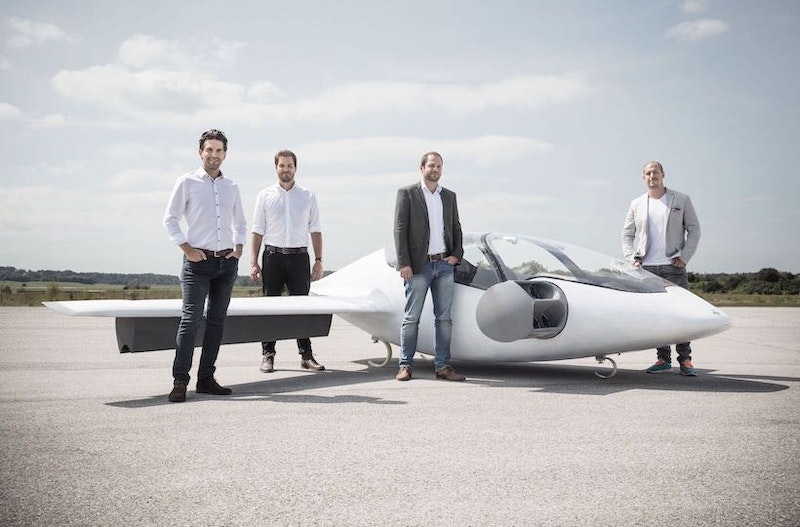 German start-up Lilium has secured $90 million in Series B funding to build a five-seat, all-electric flying taxi.
The funding group consists of Tencent; LGT, the international private banking and asset management group; Atomico, the Series A backer founded by Skype co-founder Niklas Zennström; and Obvious Ventures, whose co-founder Ev Williams is Twitter's co-founder and former CEO. The investment brings total capital raised to more than $100 million. Freigeist (formerly e42) were the seed investors.
The investment will be used for the development of the five-seat Lilium Jet that will fly commercially, as well as to grow the current team of more than 70. In April Lilium achieved a world first when the full size prototype successfully performed its most complicated manoeuvre - transitioning between hover mode and horizontal flight.
Daniel Wiegand, co-founder and CEO said: "This investment is a tremendously important step for Lilium as it enables us to make the five-seat jet a reality. This is the next stage in our rapid evolution from an idea to the production of a commercially successful aircraft that will revolutionise the way we travel in and around the world's cities. It makes Lilium one of the best funded electric aircraft projects in the world. Our backers recognise that Lilium's innovative eVTOL technology puts us in the lead in this exciting new industry, with no other company promising the economy, speed, range and low-noise levels of the Lilium Jet. We are continuing to recruit the very brightest and best global talent in aeronautical engineering, physics, electric propulsion and computer science to join us on this extraordinary aviation journey where the only limits are the laws of physics."
The Lilium Jet's electric jet engines are highly efficient and ultra-low noise, allowing it to operate in densely populated urban areas, while also covering longer distances at high speed with zero emissions. With the jet requiring no significant infrastructure, Lilium will be able to bring high speed transportation services to small cities and villages as well as large city centres for the first time.
The Lilium Jet will be able to travel at up to 300 km per hour for one hour on a single charge - meaning an example 19 km journey from Manhattan to JFK Airport could last as little as five minutes. The jet's economy and efficiency means flights are predicted to cost less than the same journey in a normal road taxi.
David Wallerstein, Chief Exploration Officer at Tencent said: "Transportation technologies play a fundamental role in structuring our everyday lives. Lilium's electric powered eVTOL aircraft offers new mobility options that can benefit people around the world. From under-developed regions with poor road infrastructure, to the developed world with traffic congestion and sprawl, new possibilities emerge when convenient daily flight becomes an option for all of us. Lilium offers a substantial and environmentally-friendly transportation breakthrough for humanity."
Niklas Zennström, CEO and Founding Partner at Atomico said: "Lilium has already demonstrated its leadership in this new eVTOL industry and its once-in-a-generation transformative technology will have a seismic, positive impact on the world for generations to come. Now, with this latest investment round, Lilium has the capital and resources to speed ahead with the development of a commercially successful commuter aircraft that will transform the way we travel and help to solve some of the great challenges of our time."
Source and top image: Lilium