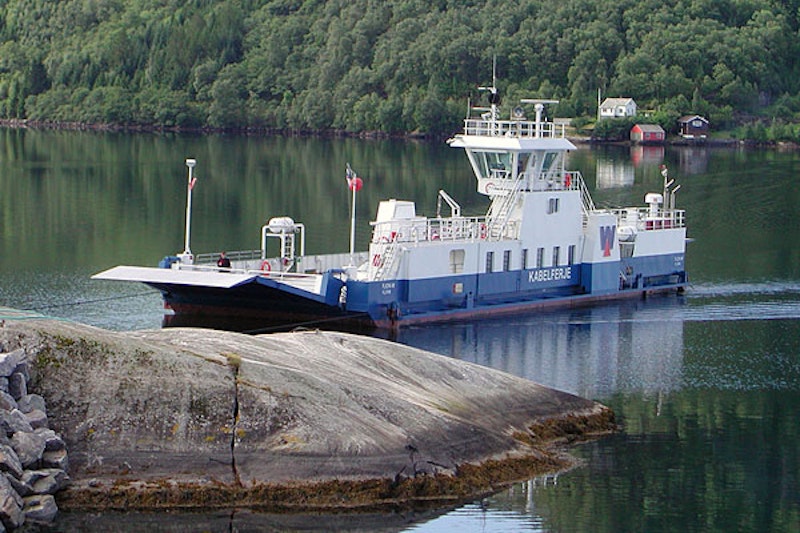 Electrovaya is pleased to announce that the KF Hisarøy electric cable ferry has now been sailing between Mjånes and Hisarøy in Norway daily for over one year, with flawless operation. The Ferry was launched in September, 2013 with a new propulsion power system consisting of a complete rechargeable battery system from Electrovaya in cooperation with Solund Verft, HAFS Elektro & Rør AS and Electrovaya ́s subsidiary Miljobil Grenland AS in Norway. The Owner of the vessel is Wergeland Halsvik AS.
The 100KWh prototype battery system is based on Electrovaya's SuperPolymer®2.0 technology, providing excellent performance and reliability with an exceptionally small on-board footprint. The battery system is an important step forward for the global maritime industry and a major step towards replacing diesel generators with a greener, toxic-free alternative form of energy. The owner of the vessel is Wergeland AS and Gulen Skyssbåtservice operates the ferry.
The battery electric ferry can save up to approximately 180,750 liters of fuel consumption over its expected lifetime. It has a potential to save about 500 tonnes of emissions; 480 tonnes of CO2, 9 tonnes of particulate matter and volatile organic compounds, 2 tonnes of Carbon monoxide and 2 tonnes of other type of emissions. The Electrovaya lithium ion battery also eliminates fuel exhaust including the usual carcinogens from diesel exhaust.
The Cable Ferry is operating approximately 10 round-trips per day between the mainland and the Hisarøy Island, a round trip distance of about 1.6 kilometers. The Cable Ferry is driven by two winches on-board and Electrovaya's on-board Lithium Ion battery system is recharged on the mainland between the round trips and over-night. KF Hisarøy is built to carry 49 passengers and 6 cars.
With the International Maritime Organization (IMO) pressuring the marine industry to reduce GHG emissions and as the price of diesel continues to rise, there has been growing interest in developing clean propulsion systems for vessels in countries including Norway and Canada. The marine electric vehicle market is expected to grow from $2.6 billion to $6.3 billion by 2023. Demand will come from both on-water and underwater electric vehicles for use both on inland waterways and the sea. The key advantages of electric powertrains for marine vehicles are the lower maintenance requirements and minimal noise, air and water pollution.
Wergeland Halsvik AS is very pleased with the ferry and the battery system delivered from the yard and its cooperating partners " said Hans Wergeland, the owner of KF Hisarøy. "As this market grows, and the demand for environmentally friendly, zero carbon foot-print energy solutions increases, this system is well-suited to further opportunities in the marine sector."
"We are delighted to be working with Electrovaya , Miljobil Grenland and HAFS Electro." says Svein-Tore Eide, General Manager of Solund Verft AS, the ship building company responsible for the project. "This first battery electric cable and road ferry in Scandinavia demonstrates that an all-electric propulsion system has value for other marine applications," added Mr Eide.
Electrovaya is pleased to have been part of this historic launching of Scandinavia's first electric cable Ferry. In addition to addressing the Global problems of Climate Change, this project has enabled Electrovaya to gather important technical data about the operation of such a vessel, positioning Electrovaya as a leader in this industry.
Source: Electrovaya
For more see Electric Vehicle Forecasts, Trends and Opportunities 2015-2025.