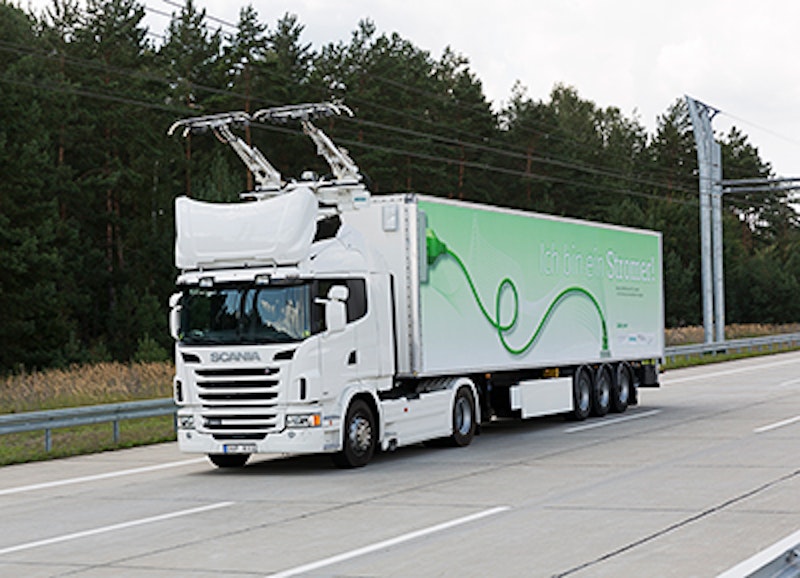 Siemens will install a catenary system for hybrid trucks in Sweden. The contract was awarded by the Swedish Transport Administration to the County Council of Gävleborg. The catenary system will electrify a two-kilometer stretch of the E16 highway north of Stockholm in the context of a demonstration project. The test results will be available two years from the start of the demonstration phase and are intended to demonstrate the system's suitability for future commercial use. Sweden has set ambitious climate targets - the aim is to develop a fossil fuel independent transport sector by 2030.
"The eHighway is twice as efficient as internal combustion engines. This means that not only is energy consumption cut in half but also local air pollution is reduced," says Roland Edel, Chief Technology Officer of Siemens Mobility. "The electric hybrid is the first step on the road to electrically powered vehicles that will come to play an increasingly important role in the development of sustainable freight transport."
The core of the system is an intelligent pantograph combined with a hybrid drive system. A sensor system enables the pantograph to hook up to the catenary system and disconnect automatically at speeds of up to 90 km/h. Trucks equipped with the system draw power from the overhead catenary wires as they drive, enabling them to travel efficiently and with zero local emissions. On roads without any catenary infrastructure, the vehicles in Sweden can make use of their diesel hybrid system. As an alternative, the system can run, for example, on compressed natural gas or a battery.
"The eHighway concept developed by Siemens combines tried and tested rail technology with the flexibility of road transport," says Jan Nylander, project leader for the County Council of Gävleborg. "Combined with Scania's hybrid technology, employed fuel consumption and emissions will be cut while the intelligent pantograph ensures that eHighway vehicles are just as flexible as conventional vehicles."
The demonstration project will be conducted on the E16 which connects the regions of Dalarna and Gävleborg, industrial regions dominated by steel, pulp and paper, and mining industries, with the port of Gävle. Two vehicles will be used in the demonstration phase. These are electric hybrid trucks manufactured by Scania and adapted, in collaboration with Siemens, to operate under the catenary system.
In California, Siemens is working with vehicle manufacturer Volvo and local truck retrofitters on a demonstration project for the South Coast Air Quality Management District (SCAQMD). This project is testing how different truck configurations interact with the eHighway infrastructure set up in the vicinity of the ports of Los Angeles and Long Beach.
Source and top image: Siemens