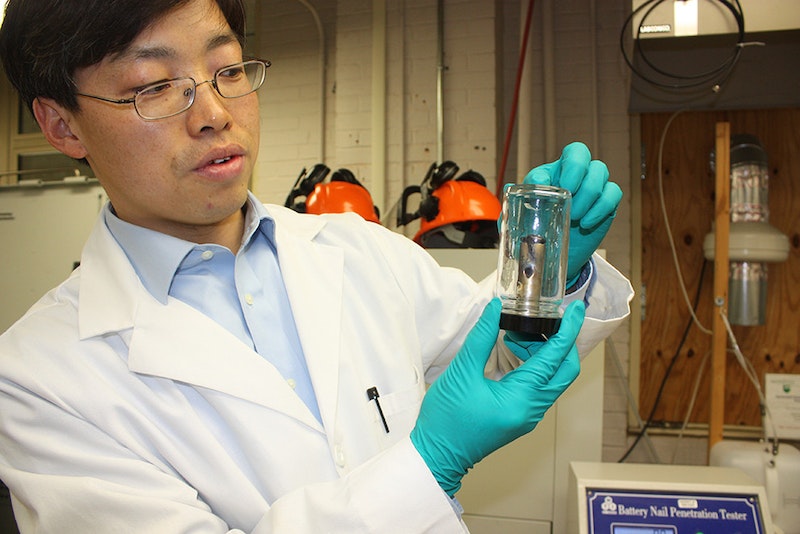 Researchers in Penn State's Battery and Energy Storage Technology (BEST) Center are working to make the lithium-ion (Li-ion) batteries we use every day safer by inserting sensors to warn users of potential problems inside the battery.
Li-ion batteries are extremely common because they are small, lightweight, and provide more energy based on their size than traditional batteries. Li-ion batteries are ideal power sources for mobile electronics, such as laptops, cellphones, and iPods, as well as airplanes and electric and hybrid vehicles.
"Li-ion batteries essentially provide portable power for everything," said Chao-Yang Wang, William E. Diefenderfer Chair of Mechanical Engineering and professor of mechanical engineering, chemical engineering, and materials engineering.
While in general these batteries are very safe, recent events including battery fires aboard the Boeing Dreamliner and in the currently popular hoverboards underscore significant issues.
Li-ion batteries contain a flammable electrolyte solution that under normal usage is not dangerous. However, if the battery is punctured, as may happen in a car accident, or overcharged due to a malfunction, a problem called thermal runaway can occur. When this happens, the battery may overheat and the battery pack catch on fire.
As devices get smaller and the demand for energy increases, safety becomes a greater concern.
"Your cell phone charge can now last for a week instead of a day, but it's still the same size. The battery has a lot more energy density, you are compressing more and more energy into a smaller space, and you have to be careful when you do that," said Wang. "Our job is to come up with solutions to provide safety while at the same time increasing performance."
Penn State researchers are delivering greater safety by placing temperature sensors inside Li-ion batteries to monitor internal temperatures, detect problems, and provide early warning for intervention. This technology is called internal reaction temperature sensing (RTS).
"We have a unique capability to put sensors inside of cells," said Chris Rahn, professor of mechanical engineering. "It's an emerging area and we are on the forefront."
Battery cells generate heat from the inside. It can take a long time for the external temperature to rise because of the battery case. By the time an external sensor measuring voltage, current, or temperature registers a problem it might be too late to prevent a fire.
RTS directly monitors the temperature inside the cell where the reaction is taking place and can detect temperature spikes more quickly and accurately than surface sensors. If the sensor detects that the inside is too hot, it will shut down the current flow in the battery.
Penn State was the first university to make large-format Li-ion cells in the lab and it's that technology that allows researchers to insert and test these sensors.
"We make the batteries in our lab and then test them in our lab," said Guangsheng Zhang, research associate in mechanical engineering. "Very few universities have the capabilities to make their own batteries."
RTS is a step toward a larger vision at Penn State to create smart batteries. Smart batteries would have numerous built-in sensors and actuators to enhance battery performance, life, and safety. Battery operators could not only detect what is happening inside the battery, but they could also change the internal state of the battery - for example heating a battery so that it would work in extreme cold.
Emerging technologies such as robots and drones are limited by the capabilities of the batteries needed to power them. Enhanced batteries would provide a tremendous opportunity to improve those technologies.
Source and top image: Pennsylvania State University
Learn more at the next leading event on the topic: Energy Storage Innovations USA 2020