A tiny squeeze gives a big boost in performance 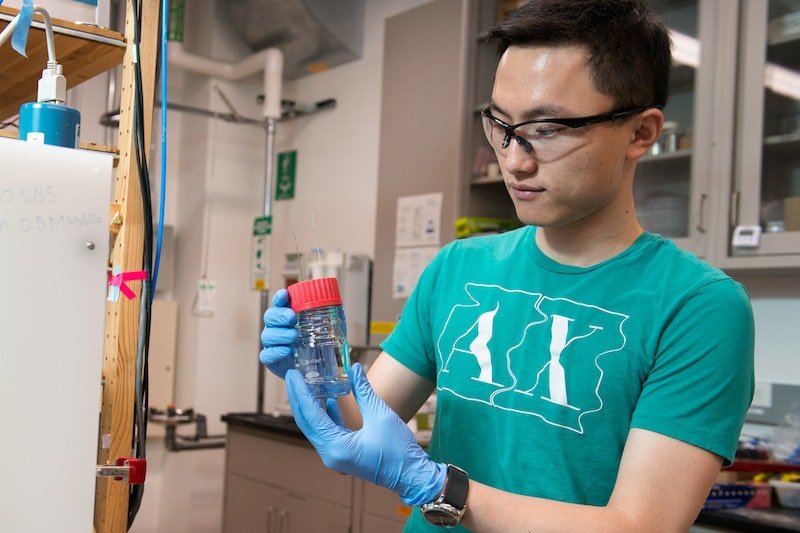 A nanosize squeeze can significantly boost the performance of platinum catalysts that help generate energy in fuel cells, according to a new study by Stanford scientists.
The team bonded a platinum catalyst to a thin material that expands and contracts as electrons move in and out, and found that squeezing the platinum a fraction of a nanometer nearly doubled its catalytic activity. The findings are published in the journal Science.
"In this study, we present a new way to fine-tune metal catalysts at the atomic scale," said lead author Haotian Wang, a former graduate student at Stanford now at Harvard University. "We found that ordinary battery materials can be used to control the activity of platinum and possibly for many other metal catalysts."
The new technique can be applied to a wide range of clean technologies, Wang said, including fuel cells that use platinum catalysts to generate energy, and platinum electrolyzers that split water into oxygen and hydrogen fuel.
"Our tuning technique could make fuel cells more energy efficient and increase their power output," said co-author Yi Cui, a professor of materials science and engineering at Stanford and of photon science at the SLAC National Accelerator Laboratory. "It could also improve the hydrogen-generation efficiency of water splitters and enhance the production of other fuels and chemicals."
Electronic structure
Catalysts are used to make chemical reactions go faster while consuming less energy. The performance of a metal catalyst depends on its electronic structure - that is, how the electrons orbiting individual atoms are arranged.
"The electronic structure of a catalyst needs to match the molecule of interest in order to achieve the chemical reaction you want," Wang explained. "You can adjust the electronic structure of a catalyst by compressing the atoms or pulling them apart."
The Stanford team introduced a novel way to compress or separate the atoms by 5 percent, a mere 0.01 nanometer.
"That might not seem like much, but it's really a lot," Cui said. "How did we achieve that? It's really a marriage of battery research and catalysis."
Experimental electrode
The study focused on lithium cobalt oxide, a material widely used in batteries for cellphones and other electronic devices. The researchers stacked several layers of lithium cobalt oxide together to form a battery-like electrode.
"Applying electricity removes lithium ions from the electrode, causing it to expand by 0.01 nanometer," Cui said. "When lithium is reinserted during the discharge phase, the electrode contracts to its original size."
For the experiment, the Stanford team added several layers of platinum to the lithium cobalt oxide electrode.
"Because platinum is bonded to the edge, it expands with the rest of the electrode when electricity is added and contracts during discharge," Cui said.
Performance
Separating the platinum layers a distance of 0.01 nanometer, or 5 percent, had a significant impact on performance, Wang said.
"We found that compression makes platinum much more active," he said. "We observed a 90 percent enhancement in the ability of platinum to reduce oxygen in water. This could improve the efficiency of hydrogen fuel cells."
Stretching the electrode by 5 percent had the opposite effect, suppressing oxygen production by 40 percent, Wang said.
"This is a dream experiment for a theorist," said study co-author Jens Nørskov, a professor of chemical engineering at Stanford's SUNCAT Center for Interface Science and Catalysis. "We predicted theoretically some years ago that straining a catalyst can be used to control its performance, and here is the experiment to show that our theory works well."
"Our technology offers a very powerful way to controllably tune catalytic behavior," Cui added. "Now, mediocre catalysts can become good, and good catalysts can become excellent."
Additional Stanford co-authors on the paper are Fritz Prinz, a professor of mechanical engineering and of materials science and engineering, Shicheng Xu, Charlie Tsai, Chong Liu, Jie Zhao, Yayuan Liu and Hongyuan Yuan. Frank Abild-Pedersen, a SLAC staff scientist at the SUNCAT Center, was also a co-author.
The work was funded by the U.S. Department of Energy, the Stanford Global Climate and Energy Project, the Stanford Interdisciplinary Graduate Fellowship Program and the National Science Foundation Graduate Research Fellowship Program.
Source and top image: Stanford University