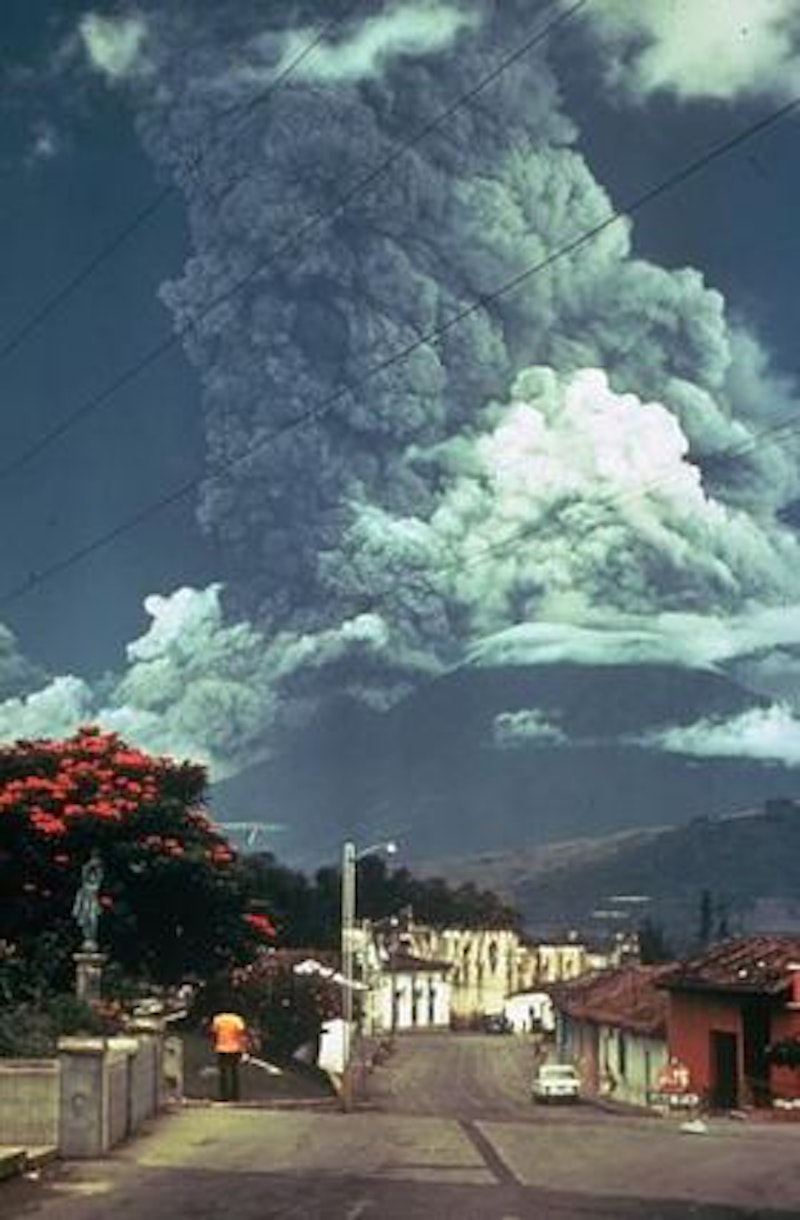 A team of volcanologists and engineers from the Universities of Cambridge and Bristol has collected measurements from directly within volcanic clouds, together with visual and thermal images of inaccessible volcano peaks.
During a ten-day research trip, the team carried out many proof-of-concept flights at the summits of both Volcán de Fuego and Volcán de Pacaya in Guatemala. Using lightweight modern sensors they measured temperature, humidity and thermal data within the volcanic clouds and took images of multiple eruptions in real-time.
This is one of the first times that bespoke fixed-wing unmanned aerial vehicles (UAVs) have been used at a volcano such as Fuego, where the lack of close access to the summit vent has prevented robust gas measurements. Funding from the Cabot Institute has helped the team to develop technologies to enable this capability. The UAVs were successfully flown at distances of up to 8 km away, and at a height of over 3 km above the launch site.
The group plan to return to Guatemala later in the year with a wider range of sensors including a gas analyser, a four-stage filter pack; carbon stubs for ash sampling; thermal and visual cameras, and atmospheric sensors.
Dr Emma Liu, a volcanologist from the Department of Earth Sciences at Cambridge, said: "Drones offer an invaluable solution to the challenges of in-situ sampling and routine monitoring of volcanic emissions, particularly those where the near-vent region is prohibitively hazardous or inaccessible. These sensors not only help to understand emissions from volcanoes, they could also be used in the future to help alert local communities of impending eruptions - particularly if the flights can be automated."
Dr Kieran Wood, Senior Research Associate in the Department of Aerospace Engineering at Bristol, added: "Even during this initial campaign we were able to meet significant science and engineering targets. For example, multiple imaging flights over several days captured the rapidly changing topography of Fuego's summit. These showed that the volcano was erupting from not just one, but two active summit vents."
Taking time out from their sample flights, the research group also used their aircraft to map the topology of a barranca and the volcanic deposits within it. These deposits were formed by a recent pyroclastic flow, a fast-moving cloud of superheated ash and gas, which travelled down the barranca from Fuego. The data captured will assist in modelling flow pathways and the potential impact of future volcanic eruptions on nearby settlements.
Dr Matt Watson, Reader in Natural Hazards in the School of Earth Sciences at Bristol, said: "This is exciting initial research for future investigations, and would not be possible without a very close collaboration between volcanology and engineering."
For more see Electric UAV Drones: Autonomous, Energy Independent 2017-2027
Source: University of Cambridge
Top image: Wikipedia