Shell on the future of transport

Speech given by John Abbott, Downstream Director, Royal Dutch Shell plc, at Imperial College, London, UK, on May 22 2017.
 
What happens in the transport sector, which accounts for more than a quarter of total world energy use, will be critical to progress in the ongoing energy transition. In this speech, John Abbott takes a look at some of the challenges yet to be overcome and at some of the solutions already being created. He argues that all players will need to work together if the world is to get to where it needs to be.
One of your former students came to my attention recently, a former MSc student at Imperial called Konstantinos Laskaris. After he left Imperial he got involved in the Shell Eco-marathon, founding and leading a team from his native Greece as he did his PhD. These days, he is chief motor engineer at Tesla.
From Imperial, through Shell and to the forefront of innovation in energy - that is a well-trodden path, thanks to the long-standing close collaboration between Shell and Imperial.
That collaboration has deep, and well nourished, roots. Shell has dozens of ongoing projects and programmes across multiple departments at Imperial.
There are five Shell Centres here doing valuable research work on everything from carbon capture and storage to lubricants; from materials corrosion to subsurface fluid dynamics; and innovations for natural gas.
With Shell having such a privileged and close-up view of the talented people here at Imperial, it should be no surprise that the company has hired more than 100 Imperial graduates over the last three years.
And, can I say how pleased I am that Imperial has once more entered a team into the Shell Eco-marathon, which is taking place at the Olympic Park in London in three days' time. It is part of the Make the Future festival, and a celebration of science without Imperial might feel a bit like a British barbeque without bangers. I hope many of you will be able to join us there.
I know Shell is glad to enjoy such a close collaboration with Imperial.
And the importance of collaboration for the future of transport is what I'd like to explore with you today.
  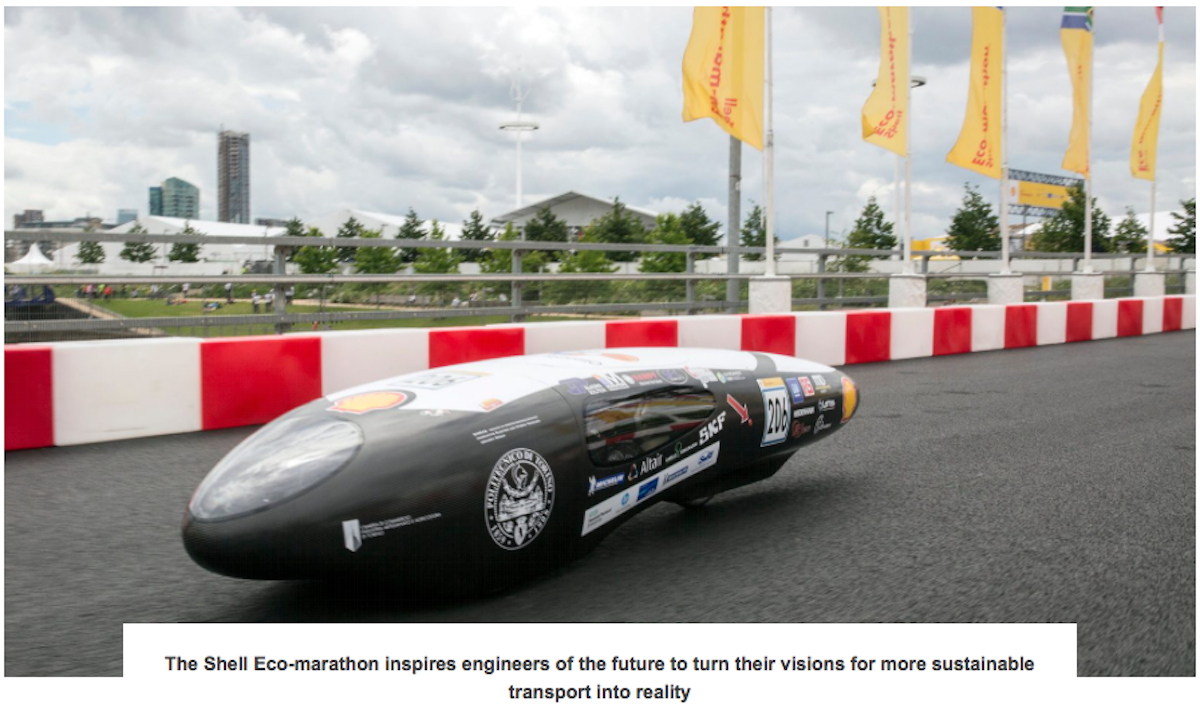 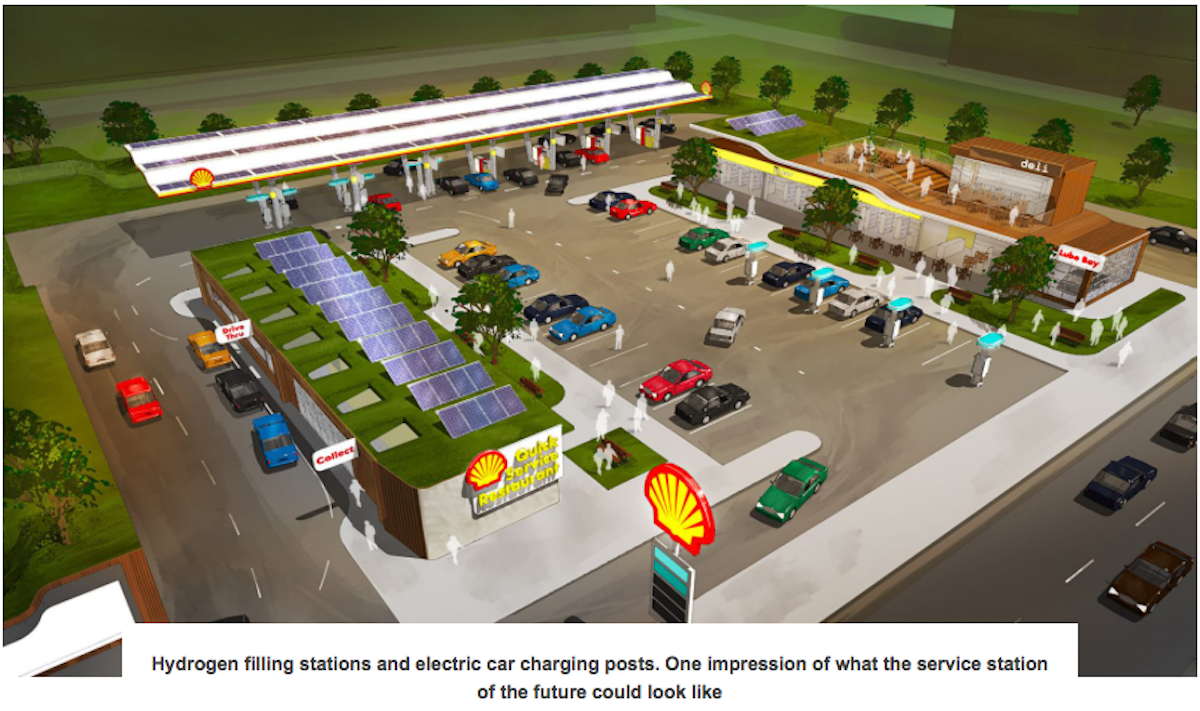 Collaboration
With no sat nav, we must work together to study the map and to work out our route. Maybe that sounds a little too easy, but there are grounds for optimism: there is a lot of collaboration already happening.
I said earlier the world will have to do better with what it already has, and make sure that what comes next is much better again. Both of those mean holding the customer in mind at all times.
Looking at the first half of that to start with.
The interesting little car in the display outside is a small example of the collaboration I am talking about. The Shell Concept Car is the result of a co-engineering collaboration between world leading vehicle, engine and lubricant designers: Gordon Murray Design, Geo Technology and Shell. Each of the three elements of the vehicle were tailored to work optimally with each other. If that car, which uses the best technology available today, went into production it would use about a third less energy than a typical city car in the UK over its lifespan.
By the way, you can see another example of that co-engineering spirit in action over the weekend on your TV (or in the flesh if you happen to be in Monaco!). Those Formula One Ferraris driven by Sebastian Vettel and Kimi Raikkonen are using Shell fuel and lubricants and are backed up by Shell engineers.
New fuels
A Shell badge on the outside, and Shell technology working with Ferrari ingenuity on the inside to get the best fuel efficiency possible.
That also has an impact for normal drivers. Right now, Shell is launching new fuel formulations across 20 countries. The make-up of the V-Power petrol contains 99% of the same type of compounds as the fuel that goes into Vettel's race car.
Another area where the technology of today is being improved is in biofuels. Through its joint venture Raízen, Shell is already one of the world's biggest producers of low-carbon biofuels. The sugar cane ethanol produced with our partners Cosan in Brazil can reduce CO2 emissions by around 70% compared with petrol.
The same joint venture is also engaged in seeking ways to make what comes next much better. It now has a facility capable of turning sugar cane waste into fuel. Raízen's goal is to be producing 42 million litres of ethanol a year from cellulosic waste by 2018.
And in a few months' time Shell, along with its partners GTI, will be opening a demonstration plant showcasing a different type of advanced biofuel process, one that turns biomass and waste into fuel that can be put straight into a car, van or truck.
And finally, I'll mention the potential for liquefied natural gas, or LNG, as a lower-carbon, low particulate, fuel for heavy shipping and freight. It's a growing area. Next year, Sovcomflot, one of the world's leading shipping companies, will launch the first ever crude oil tankers powered by LNG. The year after next, one of the world's biggest cruise operators, Carnival, will start adding LNG-powered ships to is fleet. Shell will provide LNG to both.
  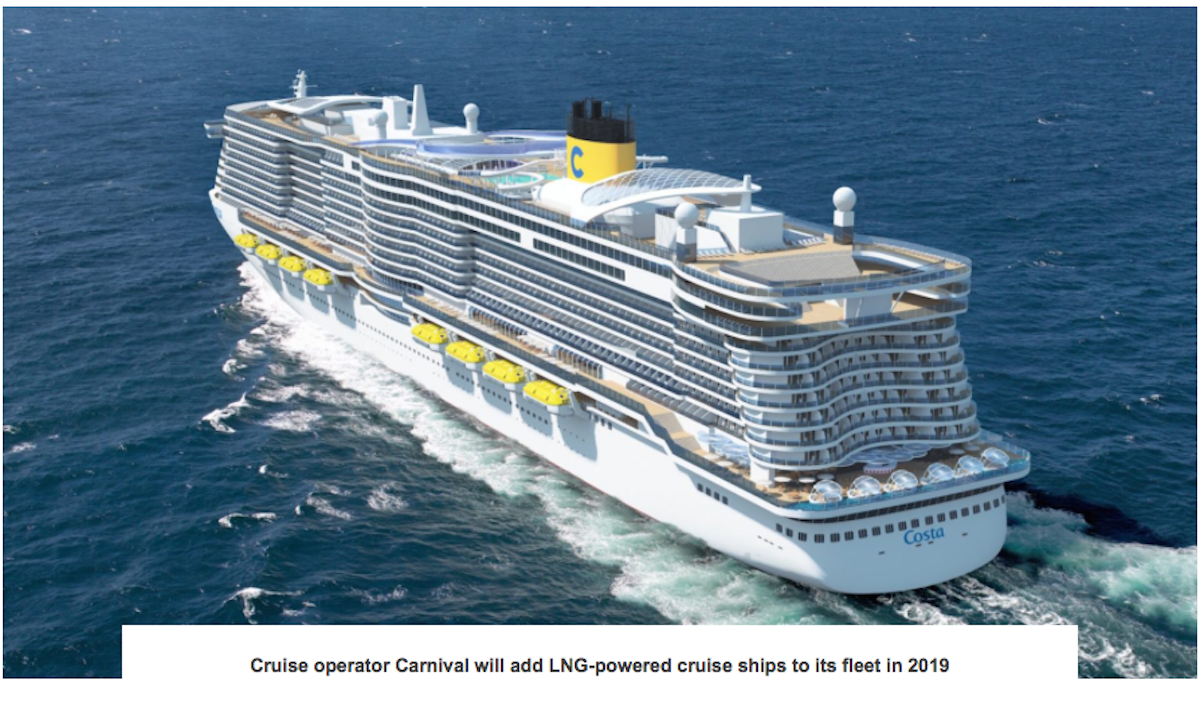 If there is a lot of collaboration going on to improve what we have, there is even more when we look at what is coming for the future.
A few weeks ago Shell joined CharIN. CharIN is an association dedicated to ensuring charging systems for battery electric vehicles have a global standard. Essentially, it is dedicated to making sure that electric vehicle drivers of the future never suffer the experience of those Shell staff I mentioned earlier on: driving in circles hunting a charging post as their car battery dies. It is an alliance of companies including Jaguar Land Rover, BMW and Daimler, Siemens and Bosch, EWE, Continental and Man.
Getting charging posts right is a big job. Getting it right will take all the 78 member companies of CharIN, and more besides. But we are working on it.
We are also working on a system to help the grid handle the coming influx of electric vehicles: to prevent localised power shortages when several people plug in their cars at the same time. It involves smart, connected, charging posts that communicate with the grid, that know when there is enough electricity in the system and when there isn't, and can choose when to charge.
This is a system which has already had successful two-year trials in London, Hamburg and San Diego. It will not only help the grid but, by taking electricity at times of excess supply, will save our customers money. That was a collaboration too: we would have got nowhere without the grid operators and the utilities.
And, by the way, you will start finding electric charging points on Shell forecourts in this country soon. The first one is due in July with 10 planned by the end of the year and more to follow. Two weeks ago we announced fast charging posts for forecourts in the Netherlands.
I talked earlier about the hydrogen dilemma. Chicken or egg? Car or pump? We are working on that too by building hydrogen filling pumps and partnering with car manufacturers and gas suppliers.
A good example is the joint venture in Germany called H2 Mobility. Shell alongside Air Liquide, Daimler, Linde, OMV and Total. Together we are putting together a nationwide network of hydrogen filling stations and at the same time Daimler is close to launching its first ever hydrogen fuel cell vehicle. Toyota and Hyundai have already launched fuel cell cars. Which came first, the car or the pump? Well, it turns out that the answer is: both.
Shell is also a founding member of the Hydrogen Council. This is a combined force of 13 energy, transport and industrial companies with hydrogen investment plans totalling $10.7 billion in the next five years. Earlier this year Shell opened its first hydrogen retail site in the UK in partnership with electrolysis experts ITM, and is opening two more this year. We are working with Toyota in California to expand the state's hydrogen refuelling network and we are looking at Japan and China too. A fortnight ago we went public with a new hydrogen pump, created by Shell and BMW's Designworks, which is a thing of beauty for customers to use.
It adds up to a lot of collaboration and the world needs all of it.
  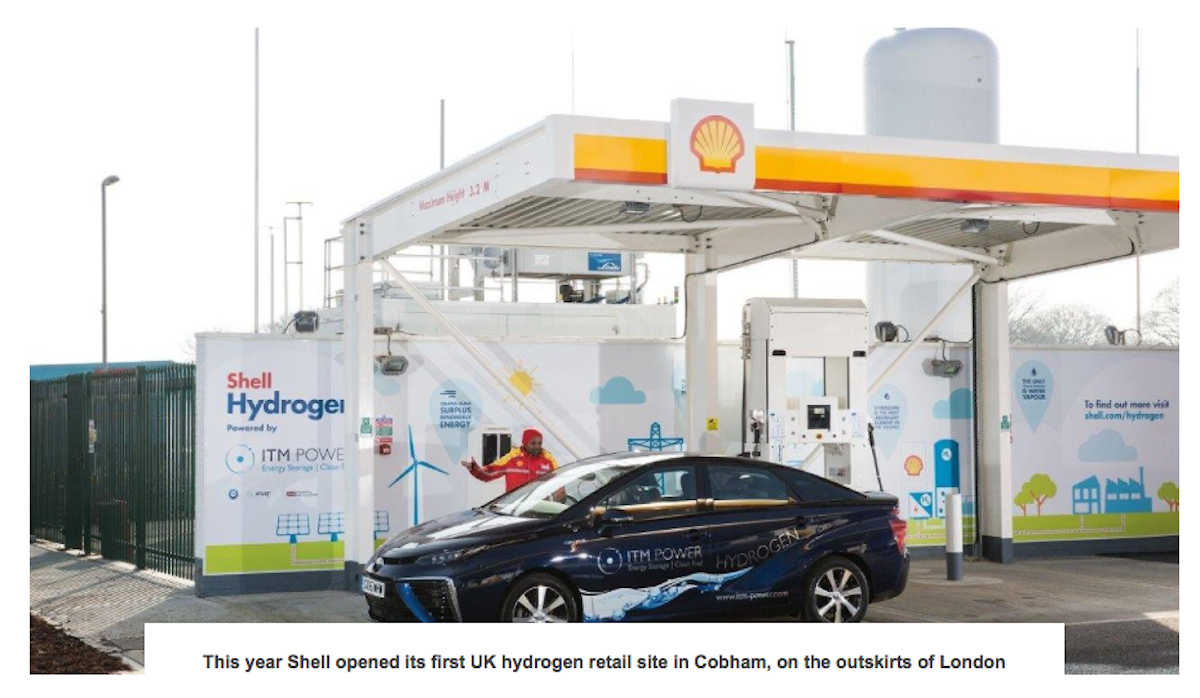 Carbon price
So far, I have talked a lot about collaboration with academics and commercial partners; there must also be collaboration with governments. Stable, forward-thinking and transparent policy frameworks are essential if other players in the transition are to invest.
A well-designed government-led carbon price is no miracle cure, but it would incentivise investment in the transition across all sectors of society and help drive consumer behaviour.
Look at what has already happened here in the UK.
In April 2015, the UK raised the carbon price floor - which taxes fossil fuels used to generate electricity - to £18 per tonne, up from around £5 in 2013. Based on analysis from Aurora Energy Research, this contributed to gas demand in the power sector rising by 56% and coal-fired power generation dropping by 73% in the first half of 2016.
As I mentioned earlier, gas burnt for power produces about half the CO2 of coal. So the result of this shift from coal to gas, at least in part, was that emissions from the power sector in the UK decreased by 24%. Some of you will have read recently that the UK went a day without using any coal to generate electricity. That is the effect of a strong market signal.
I would like to say just a few more words.
Shell is, in fact, in collaboration with many of the companies and organisations represented in this room. The world is going to need all these collaborations and many more besides if it is going to achieve net zero.
Earlier today I was shown some of the work being done here, in Imperial, in the Shell research centres. It reminded me of the value of working closely with some of the brightest minds on the planet. But more than that, it reminded me how much we can achieve together.
Contributions will often seem small, like helping a young PhD student called Konstantinos to get his dream job at Tesla. Or helping to make sure battery electric car drivers have a reliable charging post. Or providing a hydrogen pump. But, together, they add up.
We do not yet know how the world will succeed in this energy transition. We do know that the world must succeed. My faith in science - my faith in people like you in this room - is why I believe the world will succeed.
Together, we will find the way.
Thank you.