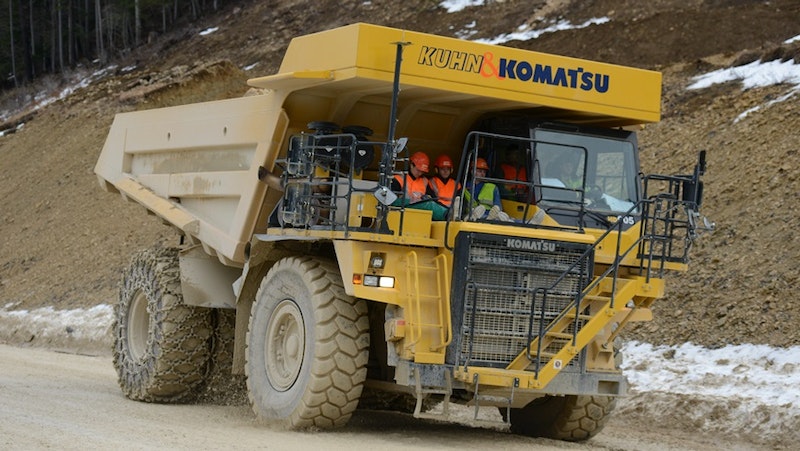 A Swiss consortium of companies is constructing the largest electric vehicle in the world - in record time. The prototype is not intended as a dainty little exhibition piece for trade fairs, but rather for hard labor in the quarry. Experts from Empa are in charge of its operational safety.
It will be the largest electric vehicle in the world: weighing in at 45 tons when empty plus 65 tons of loading capacity - and a battery pack boasting 700 kWh of storage capacity. That's as much as eight Tesla Model S vehicles. The driver has to climb nine stairs to get to work and the e-mobile's tires measure almost two meters in diameter. Not everything on the vehicle is new, however: the monster electric vehicle is based on a used Komatsu dumper truck, which is being disassembled and reconstructed at Kuhn Schweiz AG in Lommis. The diesel engine has already been removed and space is being made around the chassis for the battery packs, which are supposed to power the vehicle in the second half of its life.
Ten hard years in the quarry
Ten hard years of toil are in store for the electrically powered Komatsu HD 605-7. It is expected to transport material down from a mountain ridge and into the valley 20 times a day - more precisely, from a quarry on the slopes of the Chasseral to the Ciments Vigier SA cements works near Biel. The electric drive carries key advantages for these journeys: instead of heating up the brakes during the descent, the gigantic electric engine acts like a generator recharging the battery pack. The empty truck then uses this energy to travel back up the hill. If all goes as planned, the electric dumper truck will even harvest more electricity while traveling downhill than it needs for the ascent. Instead of consuming fossil fuels, it would then feed surplus electricity into the grid.
This seemingly barmy idea is costing Ciments Vigier SA a seven-digit sum (in Swiss francs). A team comprising two companies is to get the vehicle rolling: Lithium Storage GmbH from Illnau, which brings experience of electric trucks to the table, and the Kuhn Group, which sells Komatsu dumper trucks all over Europe. The Swiss Federal Office of Energy (SFOE) is supporting the project. Empa is also in on the action: battery expert Marcel Held is in charge of safety assessments. He is evaluating the battery pack produced by Chinese manufacturer Shenzen Westart and checking its giant construction and the programming of the battery management system, which stems from Swiss manufacturer Esoro.
The cornerstones of the battery pack have already been fixed: the battery pack for the e-dumper will weigh 4.5 tons and consist of 1,440 nickel manganese cobalt cells.
Never before has a land vehicle been fitted with such a vast battery pack. "Nickel manganese cobalt cells are also the choice of the German automobile industry when it comes to the next generation of electric cars," explains Held. He is primarily interested in how the cells respond if an accident occurs. What happens if a cell is damaged mechanically? If a switch malfunctions and the battery does not disconnect from the electricity once charged? "Some batteries start smoking, others burst into flames," as Held is all too aware. "The crucial thing in this instance is to make sure the neighboring cells are not damaged by the fire and heat, otherwise there is the risk of a chain reaction." Held will conduct overcharging tests at Empa's test rig and also mistreat a few cells with a steel nail.
Never before has a vehicle of this performance class been constructed to conquer slopes of up to 13 percent inclination under the harshest of environmental conditions while straining the batteries with electrical currents of up to 3,000 amperes, but also charging them by 40 kWh during a single descent and traveling as an energy plus vehicle on balance (plus 10 kWh of energy per roundtrip). If the use of the new vehicle proves successful, Ciments Vigier SA could power up to eight vehicles purely electrically in the long run. For Kuhn Schweiz AG this opens up new fields for large-scale construction machines, such as in tunnel construction or in residential areas that are sensitive to exhaust gas and noise.
For more see Electric Vehicles for Construction, Agriculture and Mining 2017-2027
Source: Empa
Top image: Andreas Sutter, Lithium Storage GmbH