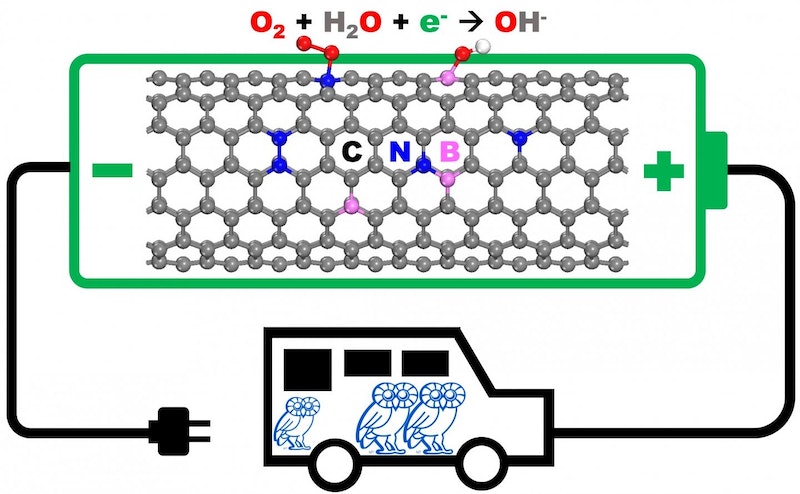 Nitrogen-doped carbon nanotubes or modified graphene nanoribbons may be suitable replacements for platinum for fast oxygen reduction, the key reaction in fuel cells that transform chemical energy into electricity, according to Rice University researchers.
The findings are from computer simulations by Rice scientists who set out to see how carbon nanomaterials can be improved for fuel-cell cathodes. Their study reveals the atom-level mechanisms by which doped nanomaterials catalyze oxygen reduction reactions (ORR).
The research appears in the Royal Society of Chemistry journal Nanoscale.
Theoretical physicist Boris Yakobson and his Rice colleagues are among many looking for a way to speed up ORR for fuel cells, which were discovered in the 19th century but not widely used until the latter part of the 20th. They have since powered transportation modes ranging from cars and buses to spacecraft.
The Rice researchers, including lead author and former postdoctoral associate Xiaolong Zou and graduate student Luqing Wang, used computer simulations to discover why graphene nanoribbons and carbon nanotubes modified with nitrogen and/or boron, long studied as a substitute for expensive platinum, are so sluggish and how they can be improved.
Doping, or chemically modifying, conductive nanotubes or nanoribbons changes their chemical bonding characteristics. They can then be used as cathodes in proton-exchange membrane fuel cells. In a simple fuel cell, anodes draw in hydrogen fuel and separate it into protons and electrons. While the negative electrons flow out as usable current, the positive protons are drawn to the cathode, where they recombine with returning electrons and oxygen to produce water.
The models showed that thinner carbon nanotubes with a relatively high concentration of nitrogen would perform best, as oxygen atoms readily bond to the carbon atom nearest the nitrogen. Nanotubes have an advantage over nanoribbons because of their curvature, which distorts chemical bonds around their circumference and leads to easier binding, the researchers found.
The tricky bit is making a catalyst that is neither too strong nor too weak as it bonds with oxygen. The curve of the nanotube provides a way to tune the nanotubes' binding energy, according to the researchers, who determined that "ultrathin" nanotubes with a radius between 7 and 10 angstroms would be ideal. (An angstrom is one ten-billionth of a meter; for comparison, a typical atom is about 1 angstrom in diameter.)
They also showed co-doping graphene nanoribbons with nitrogen and boron enhances the oxygen-absorbing abilities of ribbons with zigzag edges. In this case, oxygen finds a double-bonding opportunity. First, they attach directly to positively charged boron-doped sites. Second, they're drawn by carbon atoms with high spin charge, which interacts with the oxygen atoms' spin-polarized electron orbitals. While the spin effect enhances adsorption, the binding energy remains weak, also achieving a balance that allows for good catalytic performance.
The researchers showed the same catalytic principles held true, but to lesser effect, for nanoribbons with armchair edges.
"While doped nanotubes show good promise, the best performance can probably be achieved at the nanoribbon zigzag edges where nitrogen substitution can expose the so-called pyridinic nitrogen, which has known catalytic activity," Yakobson said.
"If arranged in a foam-like configuration, such material can approach the efficiency of platinum," Wang said. "If price is a consideration, it would certainly be competitive."
Source and top image: Rice University
Learn more at the next leading event on the topic: Energy Storage Innovations USA 2020