For the first time, scientists from the University of Hawai'i at Mānoa (UH Mānoa) and the Monterey Bay Aquarium Research Institute (MBARI) will deploy a small fleet of long-range autonomous underwater vehicles (LRAUVs) that have the ability to collect and archive seawater samples automatically. These new robots will allow researchers to track and study ocean microbes in unprecedented detail. For more information see the IDTechEx report on Autonomous Vehicles Land, Water, Air.
Ocean microbes produce at least fifty percent of the oxygen in our atmosphere while removing large amounts of carbon dioxide. They also form the foundation of marine food webs, including those that support global ocean fisheries. Edward DeLong and David Karl, oceanography professors in the UH Mānoa School of Ocean and Earth Science and Technology (SOEST) have been studying these microbes for decades. For this project, they and their teams are collaborating with engineers from MBARI to test new ways of adaptively sampling oceanographic features such as open-ocean eddies, swirling masses of water that move slowly across the Pacific Ocean, which can have large effects on ocean microbes.
In late February 2018, MBARI engineers completed the construction and testing of three new LRAUVs in collaboration with UH Mānoa scientists, and delivered them last week for their first deployment in Hawaiian waters. As the LRAUVs move through the ocean, they collect information about water temperature, chemistry, and chlorophyll (an indicator of microscopic algae) and send this data to scientists on shore or on a nearby ship. Additionally, a unique aspect of these AUVs is an integrated Environmental Sample Processor (ESP), a miniature robotic laboratory that collects and preserves seawater samples at sea, allowing researchers to capture a snapshot of the organisms' genetic material and proteins. 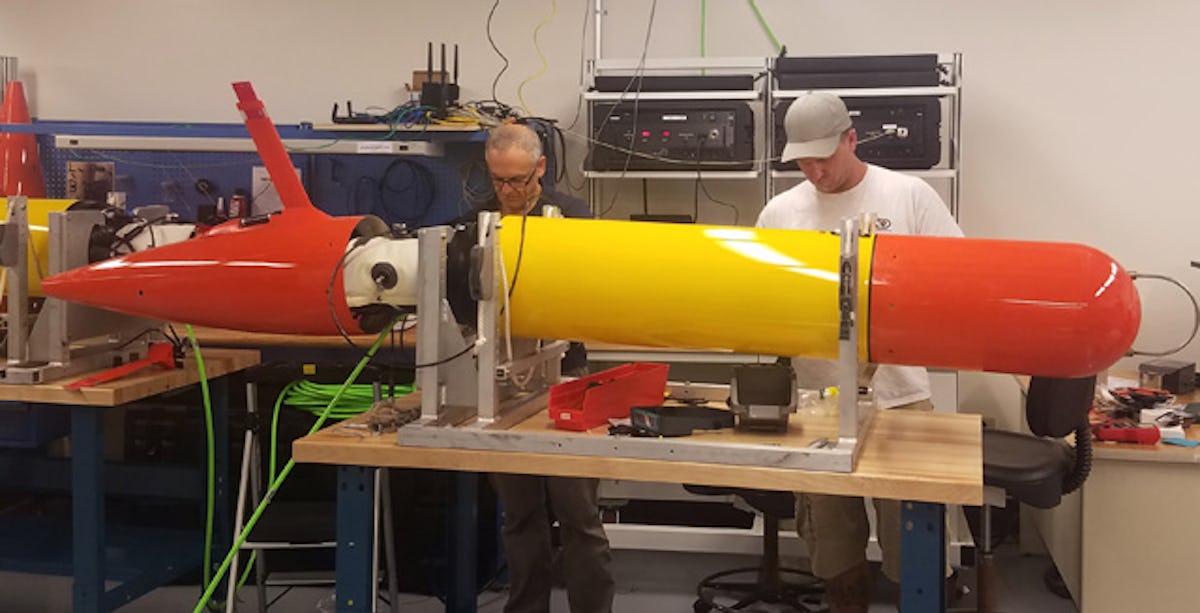 MBARI has been developing ESPs for about 15 years. The first instruments were about the size of a 55-gallon drum. These latest ESPs, the third generation, are eight to ten inches in diameter—one-tenth the original size—and were designed specifically to fit inside an LRAUV.
Jim Birch, MBARI's lead engineer on the ESP project commented, "When we first talked about putting an ESP in an AUV, I thought to myself 'this is never going to happen.' But now I really think this is going to transform oceanography by giving us a persistent presence in the ocean—a presence that doesn't require a boat, can operate in any weather condition, and can stay within the same water mass as it drifts around the open ocean."
With its surveying ability, the LRAUV allows scientists to discover, track, and sample open-ocean eddies, which can be over 100 kilometers (62 miles) across and last for months. When these eddies spin counterclockwise they bring water from the depths up toward the surface. This water often carries nutrients that microscopic algae (phytoplankton) need to survive.
"The new LRAUVs can transit for over 600 miles, and use their own 'eyes and ears' to detect important oceanographic events like phytoplankton blooms," DeLong explained. "These new underwater drones will greatly extend our reach to study remote areas, and also will allow us to sample and study oceanographic events and features we can see by remote satellite imaging, even when ships are not available."
An expeditionary cruise aboard the Schmidt Ocean Institute's (SOI) research vessel Falkor leaves on March 10 for open-ocean sea trials of MBARI's newly-designed LRAUVs. During this cruise, the researchers will locate an eddy using satellite data and then deploy the LRAUVs to survey the feature and collect water samples. When the robots return to the surface and are recovered, UH Mānoa researchers will extract DNA from the filters. This information will provide unique insight into the eddy's duration, stability, and influence on the ocean systems; and will improve current ocean models, which are critical for developing expectations on the health of future oceans.
"Although this fleet of AUVs will never replace our need for a capable research vessel, it will provide much needed access to the sea and the collection of novel data sets that would not otherwise be possible," said Karl.
This research is supported by the Simons Foundation, the National Science Foundation, the Schmidt Ocean Institute, the David and Lucile Packard Foundation, and the State of Hawai'i.
Source and images: Monterey Bay Aquarium Research Institute