Drones for good: using tech to help save entangle whales 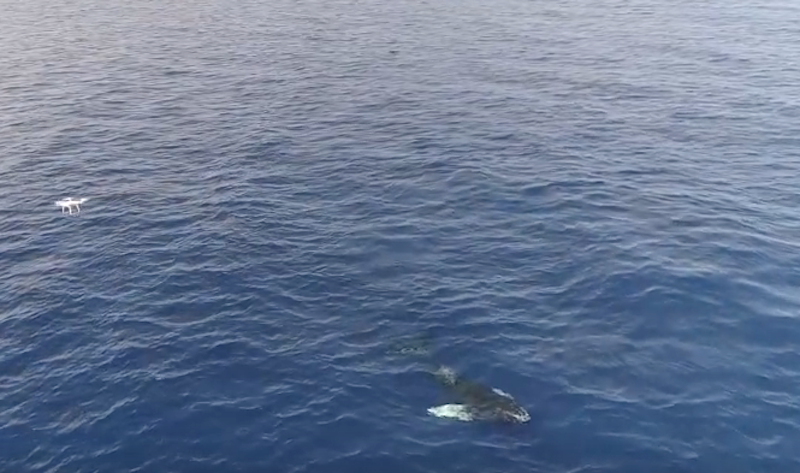 Every fall, pods of enormous humpback whales make their way towards Hawaii, where they can ride out the winter in warm waters of NOAA's Hawaiian Islands Humpback Whale National Marine Sanctuary. For centuries humans have watched this noble migration with awe and wonder. But today, an ever-growing number of these amazing animals are finding themselves in grave danger, entrapped in fishing gear and other marine debris. For more information see the IDTechEx report on electric UAV drones.
Specialists from the National Oceanic and Atmospheric Administration (NOAA) have worked with local volunteers to help save the whales by launching small boats with trained teams to disentangle them while in the water. It's risky work, bringing people into close contact with the gigantic mammals. Knives on long poles work to cut free ropes that have sunk deep into the whales flesh. Last year, a volunteer was killed when a whale struck him.
To help make the process safer, the whale rescue squads are turning to a new technology: drones.
Matt Pickett, a former NOAA sanctuary manager, is now the founder of Oceans Unmanned, a non-profit that facilitates the use of drone technology for marine conservation. Oceans Unmanned recently unveiled the freeFLY program, a new initiative designed to provide aerial support using small drones for large whale entanglement response efforts.
"In the past, we had to get close to the whales at least three times," explains Pickett. "Once to figure out where the animal was entangled, once to cut them free, and once to make sure the job was done right and nothing was left behind."
With drones, the team can cut that down to just one step. Using small, remote controlled quadcopters with powerful cameras they can do their initial assessment and final check. "It makes the entire process much safer for both the humans and the whales."
Imagery of whales taken by UAS platforms and those depicting rescue activities were conducted pursuant to and under the oversight of NOAA Fisheries' Marine Mammal Health and Stranding Response Program (Permit Numbers 932-1905 and 18786.) Permits were issued under the authority of the Marine Mammal Protection Act and the Endangered Species Act.
Source and top image: DJI
Learn more at the next leading event on the topic: Electric Vehicles: Material Opportunities Europe 2020