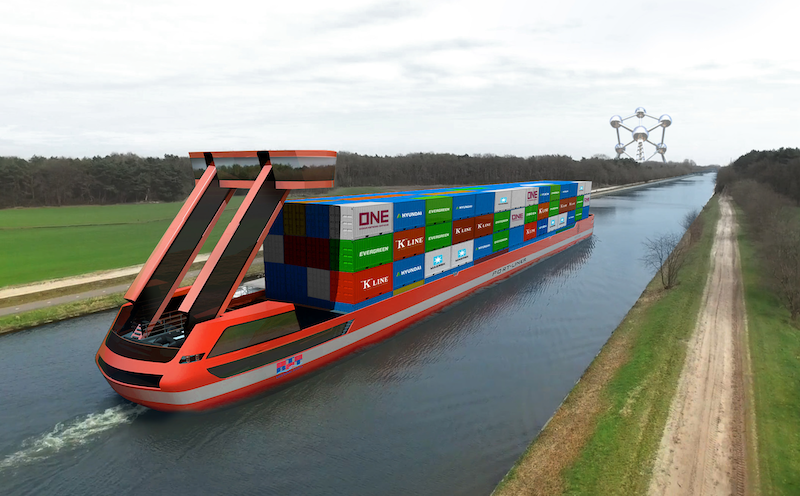 Port Liner, with a history of inland waterway transport, is producing the world's first fully electric, emission-free and potentially crewless container barges that are soon to operate from the ports of Antwerp, Amsterdam, and Rotterdam. For more information see the IDTechEx report on Electric Boats and Ships 2017-2027.
The vessels, designed to fit beneath bridges as they transport their goods around the inland waterways of Belgium and the Netherlands, are expected to vastly reduce the use of diesel-powered trucks for moving freight. The vessels' electric motors will be driven by 20-foot batteries, charged on shore by the carbon-free energy provider Eneco.
The barges are designed to operate without any crew, although the vessels will be manned initially. The vessels are 52 metres long and 6.7m wide, and able to carry 24 20ft containers weighing up to 425 tonnes. They will be fitted with a power box giving them 15 hours of power. As there is no need for a traditional engine room, the boats have up to 8% extra space, according Port Liner. About 23,000 trucks, mainly running on diesel, are expected to be removed from the roads as a result.
At a later date, six larger 110m-long barges, carrying 270 containers, will run on four battery boxes capable of providing 35 hours of autonomous driving. Their use alone could lead to a reduction of about 18,000 tonnes per year of CO2, it is claimed.
The barges are being developed in the Netherlands with €7m in subsidies from the EU and additional funds from the ports involved. Port Liner believes it could produce about 500 barges a year to revolutionise the freight industry, although the electric motors and batteries could also be retrofitted into older boats.
The company's chief executive, Ton van Meegen, told shipping industry trade journal the Loadstar that the barges would be the first in the world to sail on carbon-neutral batteries and that only the low bridges in the low countries prevented them from being loaded with more goods. He added "There are some 7,300 inland vessels across Europe and more than 5,000 of those are owned by entrepreneurs in Belgium and the Netherlands. We can build upwards of 500 a year, but at that rate it would take some 50 years to get the industry operating on green energy."
Source: Port Liner
top image: GVT

When are these expected to be in service?

"We can make 500 barges a year" boasts chief exec but for whole 2018 in spite 7mil euros they didn't made a single one!! Whatever one saves on engine room, one looses on weight and volume of batteries needed to move this barges so those 8% is wishfull thinking!