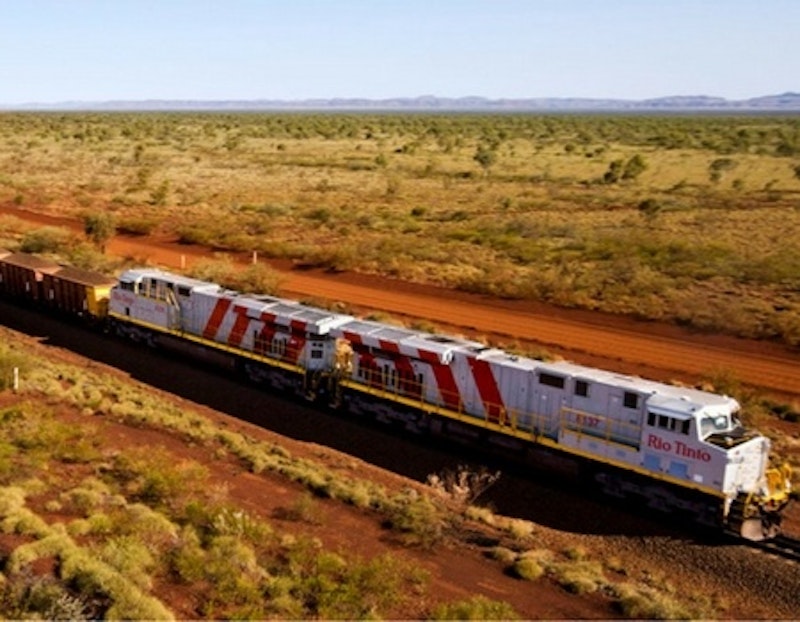 Rio Tinto has successfully deployed AutoHaul™, establishing the world's largest robot and first automated heavy-haul, long distance rail network. For more information see the IDTechEx report on Mobile Robots and Drones in Material Handling and Logistics 2018-2038.
Since completing the first loaded run in July, Rio Tinto has steadily increased the number of autonomous journeys across its world-class iron ore operations in Western Australia in a controlled and safe manner, with over 1 million kilometres now travelled autonomously.
Rio Tinto Iron Ore managing director Rail, Port & Core Services Ivan Vella said "The safe and successful deployment of AutoHaul™ across our network is a strong reflection of the pioneering spirit inside Rio Tinto. It's been a challenging journey to automate a rail network of this size and scale in a remote location like the Pilbara, but early results indicate significant potential to improve productivity, providing increased system flexibility and reducing bottlenecks."
Over the coming months we will continue to refine our autonomous operations to ensure we are able to maximise value. We continue to work closely with drivers during this period and do not expect to make any redundancies in 2019 as a result of the deployment of AutoHaul™.
The $940 million AutoHaul™ programme is focused on automating trains transporting iron ore to Rio Tinto's port facilities in the Pilbara region of Western Australia. The network is the world's first heavy-haul, long distance autonomous rail operation. Rio Tinto operates about 200 locomotives on more than 1,700 kilometres of track in the Pilbara, transporting ore from 16 mines to four port terminals.
The average return distance of these trains is about 800 kilometres with the average journey cycle, including loading and dumping, taking about 40 hours. Locomotives carrying AutoHaul™ software are fitted with on-board cameras allowing for constant monitoring from the Operations Centre. All public rail crossings on the network are fitted with CCTV cameras and have been upgraded to the highest safety standards.
Source and top image: Rio Tinto