Electricity takes to the water with Volvo Penta 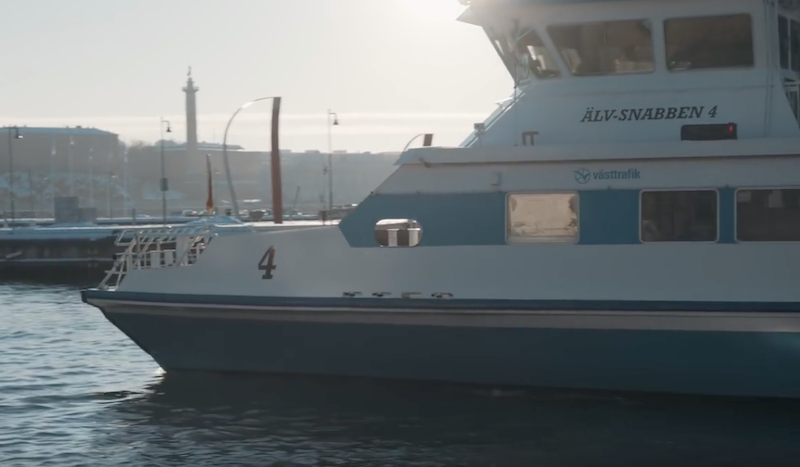 In the next phase of Gothenburg's drive to connect its residents with a seamless citywide low emission commuting network, a Volvo Penta powered electric ferry service is being introduced into the ElectriCity transport ecosystem. For more information see the IDTechEx report on Electric and Hybrid Boats and Ships 2019-2029.
Building on the growing success of Gothenburg's ElectriCity project, an all-electric ferry service is to be added to the City's existing electric bus service. The electric marine propulsion system is being provided by Volvo Penta, who joins the initiative following the success of sister company's Volvo Buses - a leading partner in the ElectriCity project - having supplied the buses to the Route 55 electric bus route in Central Gothenburg and the electric articulated buses on Route 16. Aimed to be the model of future clean urban development, the new electric-powered ferry will link both sides of the Göta River.
Gothenburg's ElectriCity partnership is a collaboration between industry, academia and local government. It involves developing, testing, demonstrating and evaluating solutions that will contribute to the establishment of new, sustainable, attractive transportation systems and open up new opportunities for future travel, transportation of goods and urban planning. Using electric power in public transport systems helps to resolve problems such as noise and poor air quality, as well as lowering energy use and the impact of transport on the climate.
Powering up electric waterways
While Gothenburg's waterways already feature ferries powered by electricity, in the form of diesel-electric engines, these operate on short routes across the river. ElectriCity's Volvo Penta-powered electric vessel, meanwhile, will be the first fully-electric ferry in the city able to complete longer, multi-stop routes along the river, and ultimately incorporate quick charging capabilities.
The opening of the route is part of a longer-term plan to introduce more clean energy ferry solutions and the development of a marine demo arena. Cities around the world are often built around waterways and connecting on-road with on-water sustainable transport in a unified traffic system is a final objective.
The ferry - Älvsnabben 4 - will be converted into the all-electric drive at the hands of Volvo Penta, in collaboration with Västtrafik's operator, Styrsöbolaget, part of Transdev. The work involves removing diesel engine-powered marine drivelines and replacing them with a battery-electric propulsion system of equal power to the outgoing diesel powerplant, but one that boasts considerably more maximum torque. Initially, the ferry will be charged overnight, supported by an onboard genset running on HVO.
The current plan is for the refit to get underway early next year, with the target of the ferry entering commercial service on the Göta river by the end of 2020.
"We fully support ElectriCity's ambition to bring Gothenburg to life by connecting people across the city in a sustainable way," explains Björn Ingemanson, President of Volvo Penta. "Volvo Penta has an advantage when it comes to electromobility. As part of the Volvo Group, we have access to the technology and expertise from many years of development with electric buses in the city of Gothenburg, where aspects like safety and efficiency have been at the forefront. Now, we aim to adapt this leading technology for use in a marine environment, bringing the benefits of proven technology into a new context."
Clean. Efficient. Connected. City
Gothenburg is one of the world's most progressive cities when it comes to addressing climate and environmental issues. The city currently has the highest ranking in the 2019 Global Destination Sustainability index. Ongoing initiatives such as the Volvo Penta-powered electric ferry service will, over time, form an integrated part of Gothenburg's long-term clean energy transport infrastructure.
"Västtrafik is aiming to reduce CO2 emissions by 90 percent before 2035. To reach this goal large-scale electrification of all our city services is crucial. This ElectriCity initiative is an important step in the right direction, and we are looking forward to adding the Volvo Penta fully electric ferry to our transport system", says Camilla Holtet, director of development at Västtrafik.
Source and top image: Volvo Car Group
Learn more at the next leading event on the topic: Electric Vehicle Materials Europe 2020