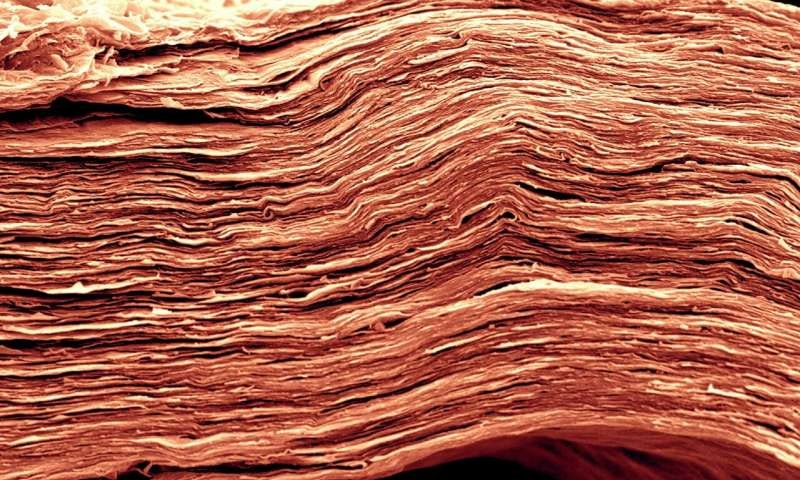 Scientists at the Department of Energy's Oak Ridge National Laboratory, Drexel University and their partners have discovered a way to improve the energy density of promising energy-storage materials, conductive two-dimensional ceramics called MXenes. The findings are published in Nature Energy. For more information see the IDTechEx report on Advanced Li-ion and Beyond Li-ion Batteries 2018-2028.
Today's batteries, which rely on charge stored in the bulk of their electrodes, offer high energy-storage capacity, but slow charging speeds limit their application in consumer electronics and electric vehicles. Tomorrow's energy-storage mainstays may be electrochemical capacitors, known as supercapacitors, which store charge at the surface of their electrode material for fast charging and discharging. However, at present supercapacitors lack the charge-storage capacity, or energy density, of batteries.
"The energy storage community is conservative, using the same few electrolyte solvents for all supercapacitors," said principal investigator Yury Gogotsi, a Drexel University professor who planned the study with his postdoctoral researcher Xuehang Wang. "New electrode materials like MXenes require electrolyte solvents that match their chemistry and properties."
The surfaces of different MXenes can be covered with diverse terminal groups, including oxygen, fluorine or hydroxyl species, which interact strongly and specifically with different solvents and dissolved salts in the electrolyte. A good electrolyte solvent-electrode match may then increase charging speed or boost storage capacity.
"Our study showed that the energy density of supercapacitors based on two-dimensional MXene materials can be significantly increased by choosing the appropriate solvent for the electrolyte," added co-author Lukas Vlcek of the University of Tennessee, who conducts research in UT and ORNL's Joint Institute for Computational Sciences. "By simply changing the solvent, we can double the charge storage."
The work was part of the Fluid Interface Reactions, Structures and Transport (FIRST) Center, an Energy Frontier Research Center led by ORNL and supported by the DOE Office of Science. FIRST research explores fluid-solid interface reactions with consequences for energy transport in everyday applications.
Drexel's Ke Li synthesized the titanium carbide MXene from a parent "MAX" ceramic—containing titanium (denoted by "M"), aluminum ("A") and carbon ("X")—by etching out the aluminum layers to form five-ply MXene monolayers of titanium carbide. Subsequently, the researchers soaked the MXenes in lithium-based electrolytes in various solvents with dramatically different molecular structures and properties. The electrical charge was carried by lithium ions that easily insert themselves between MXene layers.
Transmission electron microscopy revealed the structural integrity of the materials before and after electrochemical experiments, whereas X-ray photoelectron spectroscopy and Raman spectroscopy characterized the MXene's composition and the chemical interactions between the MXene surface and the electrolyte solvent.
Electrochemical measurements showed that the maximum capacitance (amount of energy stored) was achieved using a less conductive electrolyte. This observation was unusual and counterintuitive because one would expect a commonly used acetonitrile solvent-based electrolyte, having the highest conductivity of all tested electrolytes, to deliver the best performance. In situ X-ray diffraction showed expansion and contraction of the MXene interlayer spacing during charging and discharging when acetonitrile was used, but no changes in the interlayer spacing when the propylene carbonate solvent was used. The latter solvent resulted in much higher capacitance. Furthermore, electrodes that don't expand when ions enter and exit are expected to survive a larger number of charge-discharge cycles.
To probe the dynamics of electrolyte solvent media confined in the MXene layers, the researchers turned to neutron scattering, which is sensitive to hydrogen atoms contained in the solvent molecules.
Finally, molecular dynamics simulations done by Vlcek revealed that interactions among the lithium ions, electrolyte solvents and MXene surfaces strongly depend on the size, molecular shape and polarity of the solvent molecules. In the case of a propylene carbonate-based electrolyte, the lithium ions are not surrounded by solvent and therefore pack tightly between MXene sheets. However, in other electrolytes, lithium ions carry solvent molecules along with them as the lithium ions migrate into the electrode, leading to its expansion upon charging. Modeling may guide the selection of future electrode-electrolyte solvent couples.
"Different solvents created different confined environments that then had profound influence on charge transport and interactions of ions with the MXene electrodes," Vlcek said. "This variety of structures and behaviors was made possible by the layered structure of MXene electrodes, which can respond to charging by easily expanding and contracting the interlayer space to accommodate a much wider range of solvents than electrodes with more rigid frameworks." The title of the paper is "Influences from solvents on charge storage in titanium carbide MXenes."
Source: Oak Ridge National Laboratory
Top image: Drexel University
Learn more at the next leading event on the topic: Electric Vehicle Materials Europe 2020