Lithium to lithium, manganese to manganese 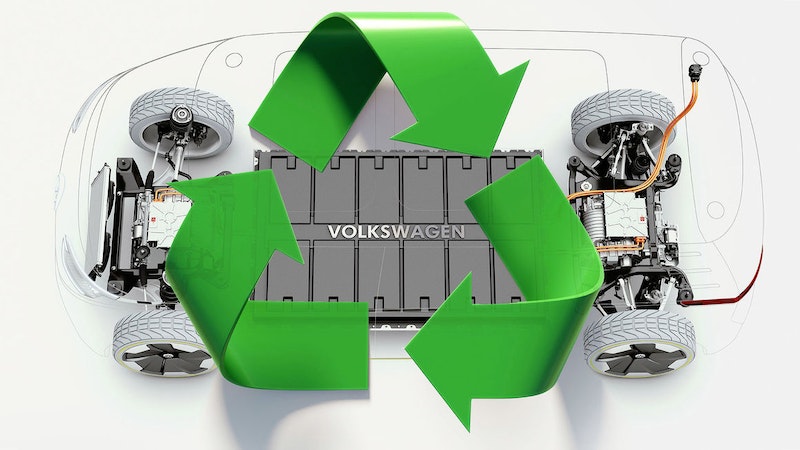 In the future, Volkswagen will offer e-mobility for all - and will assume overall responsibility: from the concepts for the vehicles, through production, sales and operations on to recycling. For this reason, a pilot plant for battery recycling is currently being set up at Salzgitter factory, south-west of Braunschweig, Germany. For more information see the IDTechEx report on Second Life Electric Vehicle Batteries 2019-2029.
Until recently, batteries were regarded as hazardous waste. They can actually serve as valuable sources of raw materials. That's why the engineers of the component department are working on a recycling concept for batteries. The aim: to return raw materials to the manufacturing process chain.
"For ten years now, we have been researching how we can recuperate raw materials. These include, above all, cobalt, lithium, manganese, and nickel" explains Thomas Tiedje, Head of Technical Planning. Another reason why multiple use of these four raw materials in particular is so important and useful is that their extraction and use is crucial for a company's carbon footprint.
"We already have sustainable battery expertise in the Group and are developing this further," says Tiedje. For months now, the management and workforce at the components plant in Braunschweig have been preparing for the high-voltage era. The first "power plants" for the I.D. electric car family are to leave the plant at the end of 2019.
These batteries will then be delivered to the assembly plants - mainly to Zwickau at the start. This is where production of the I.D. will also kick off at the end of 2019. Other sites and vehicles for the electric era, such as the SUV I.D. CROZZ, the sedan I.D. VIZZION and the lifestyle minivan I.D. BUZZ, will later be supplied with batteries from Braunschweig.
In parallel, Volkswagen Group Components is also building a pilot plant for battery cell production at its plant in Salzgitter, together with the "Center of Excellence" for batteries. In 2020, a pilot recycling plant will be set up in Salzgitter. Batteries can be recycled here as early as 2020 - initially 1,200 tons per year. This corresponds to 3,000 vehicle batteries. A further increase in capacity is envisaged for subsequent years. However, large quantities of battery returns are not expected until the end of the 2020s in any case. That is when the first large proportion of e-vehicles (which will be sold in greater volumes starting in 2020) will have reached the end of their working life.
What happens during battery recycling? First, the returns will be analyzed. After that, there are two paths: either the battery is given a so-called "second life" or it is recycled.
One possible second life for batteries is as a component for flexible charging stations. These are quick charging stations which can be operated autonomously, for example at festivals or large-scale events. They work according to the principle of a power bank, which is familiar to most people from cell phones. Alternatively, the quick charging stations are equipped with power connections and thus provide e-drivers with a quick charging option on long trips along freeways and national highways. Batteries in a "second life" are ideally suited to all such applications.
Batteries that are not given a second life will be recycled by the staff in Salzgitter. In this process, the individual battery parts will first be shredded, then the material will be dried and sieved, allowing the employees to extract the so-called "black powder." This contains the valuable raw materials of cobalt, lithium, manganese, and nickel. These materials then just have to be separated individually, after which they are available again for the production of new batteries.
The plant in Salzgitter starts as a pilot project, because the disposal and procurement of raw materials is always very expensive. The company would have to place large investments, both for procurement and for disposal of the raw materials. "So we prefer to recycle it ourselves and qualify our employees to do this, especially since we expect large batch sizes in the future," says Thomas Tiedje. The plant in Salzgitter is to be followed in the next few years by further decentralized recycling plants. Not only will they ensure a clean environment, they will also be interesting for economic reasons.
In the long term, a very ambitious goal has been set up: to recycle 97 percent of all raw materials. Today, it is 53 percent, and the plant in Salzgitter will bring this figure up to 72 percent. There is still some way to go before reaching the target of 97 percent. Even if a lot of small steps are necessary, it all serves an overarching agenda: Volkswagen is doing everything it can to make e-mobility sustainable.
Source and top image: VolkswagenGroup