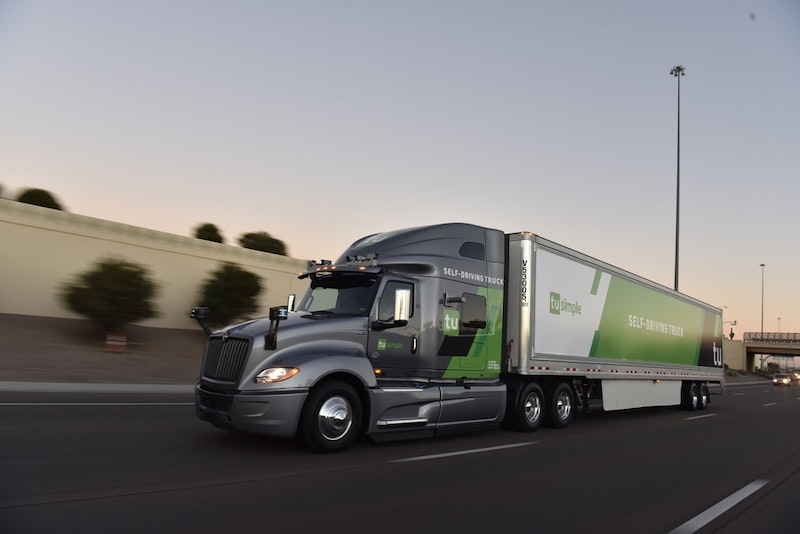 TuSimple, a global self-driving truck company, announced today that the United States Postal Service (USPS) has awarded it a contract to perform five round trips, for a two-week pilot, hauling USPS trailers more than 1,000 miles between the Postal Service's Phoenix, Arizona and Dallas, Texas distribution centers. The truck will have a safety engineer and driver on board for the duration of the pilot to monitor vehicle performance and to ensure public safety. For more information see the IDTechEx report on Electric Vehicles and Autonomous Vehicles in Mining 2018-2028.
This new route is an important milestone as TuSimple scales its autonomous operations beyond Arizona and marks the company's self-driving debut into Texas. TuSimple will run a series of its self-driving trucks for 22 hours each, which includes overnight driving, along the I-10, I-20 and I-30 corridors to make the trip through Arizona, New Mexico and Texas. The freight that flows along I-10 corridor accounts for 60 percent of the total economic activity in the United States. TuSimple expects this to be a central route for the company because there is already strong demand from other customers for runs between Arizona and Texas.
"It is exciting to think that before many people will ride in a robo-taxi, their mail and packages may be carried in a self-driving truck," said Dr. Xiaodi Hou, Founder, President and Chief Technology Officer, TuSimple. "Performing for the USPS on this pilot in this particular commercial corridor gives us specific use cases to help us validate our system, and expedite the technological development and commercialization progress."
Long-haul routes with short turnaround times, such as this 22 hour journey, are well suited for self-driving trucks because they are normally accomplished with driving teams of two. Driving teams are challenging to recruit due to overnight driving requirements, the need to share close quarters with another person and a significant truck driver shortage. According to the American Trucking Association (ATA), the driver shortage could reach 175,000 by 2024. TuSimple is on its way to achieving its milestone of first driverless operations which is intended to free human drivers to focus on the shorter, more dynamic and closer to home routes.
The Postal Service is exploring the feasibility of utilizing autonomous delivery vehicle technology to reduce fuel costs, increase safe truck operation and improve its fleet utilization rate through longer hours of operation.
TuSimple is aiming to boost the $800-billion US trucking industry by increasing safety, reducing carbon emissions and transportation costs and optimizing logistics for fleet operators. With a 1000 meter vision range, TuSimple autonomous trucks can see more and react faster than humans - rain or shine, day or night - according to the company.
Source and top image: TuSimple