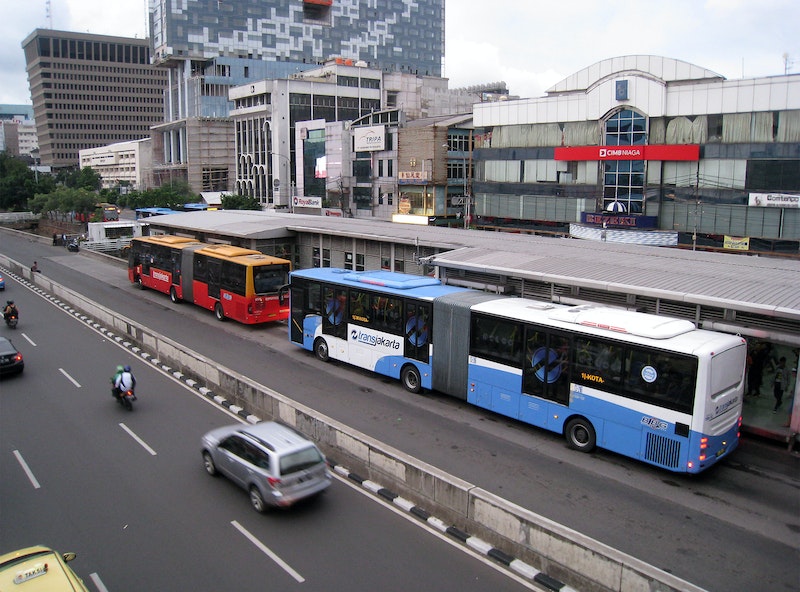 Public transit passengers in Indonesia's capital may soon notice a new green addition to their commute. In line with Governor Anies Baswedan's vision to make Jakarta one of the greenest cities in the world, the Transjakarta Bus Rapid Transit System is rolling out a trial programme of electric buses on certain routes in the city. For more information see the IDTechEx report on Electric Buses 2019-2029.
Serving almost 200 million riders every year, Jakarta's bus rapid transit system is the largest in the world. And the ridership is growing, as the government adds new routes and more buses to unclog the notorious traffic jams that plague the capital.
Testing of the buses began on public roads in late April. Transjakarta plans to take on passengers as testing progresses and appropriate permits arrive.
The transition to electric vehicles is a logical next step to fight a more dangerous irritant for Jakartans than traffic: air pollution. Increasing numbers of vehicles, coal power and burning land for agricultural purposes have steadily driven down air quality in the city. On bad days, Jakarta can find itself top of list of the most polluted cities in the world.
"We see the move toward electric vehicles as a vital way to combat air pollution and transition to a greener future," said Transjakarta Chief Executive Officer Agung Wicaksono. "The electric bus trial programme will give us a good sense of the changes we need to make to the system to ultimately replace all of Jakarta's fleet of public vehicles with electric models."
The transition is moving quickly. The first three trial buses were delivered by China's BYD and the Indonesian manufacturer PT Mobil Anak Bangsa. Earlier in March Transjakarta agreed with these and two other companies—RAC Electric Vehicles and Danfoss—to produce environmentally friendly buses for the city.
UN Environment worked closely with the Governor's office and Transjakarta to support this transition, providing technical advice on electric bus specifications and integration into public transit systems. More broadly in Indonesia, UN Environment also supports efforts with Komite Penghapusan Bensin Bertimbel to implement Euro 4 emissions and fuel quality standards and a pollution tax for vehicles, which can help significantly reduce air pollutants.
Bert Fabian, Programme Officer in UN Environment's Air Quality and Mobility Unit, noted that Jakarta's experience of air pollution is not unique in the region. "Air pollution is impacting cities across Asia and the Pacific, with serious impacts on our health. The transition to electric mobility can have a dramatic effect in reducing pollutants and making cities healthier and more enjoyable places to live."
Air pollution causes some 7 million deaths every year, and 4 million of those occur in Asia and the Pacific. Electric mobility is one of 25 solutions that UN Environment and the Climate and Clean Air Coalition have identified as quick fixes for air pollution in the region. Effectively implementing these solutions could save millions of lives and see up to 1 billion people breathing clean air by 2030.
Source: United National Environment Programme
Top image: Wikipedia
Learn more at the next leading event on the topic: Electric Vehicle Materials Europe 2020

Highlights From EVS 32
Newly Updated Report from IDTechEx "Electric Trucks 2020-2030"
Charge Expands its Charging Docking Stations Across the US and Europe
The Lidar Revolution: Enabling Machines to See Our World