Trial to control insects in greenhouses with drones 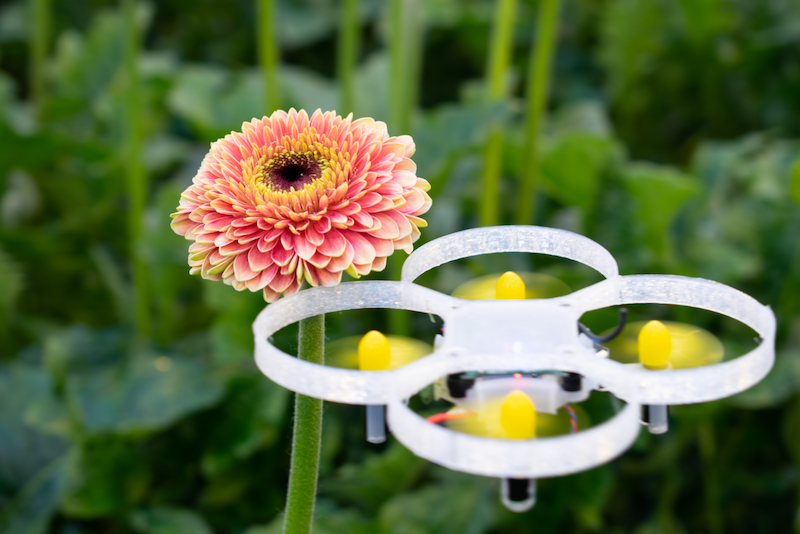 Flying pest insects will be confronted with a new sustainable enemy. The control of insect pests is currently mainly done with (bio)chemical and biological products. PATS Indoor Drone Solutions, a spin-off of the Delft University of Technology, changes that by deploying small drones that automate insect control and prevention. By means of a pilot focused on the control of Golden twin-spot moth, several Dutch innovative Gerbera growers engage in this development to remain at the forefront of sustainable cultivation. For more information see the IDTechEx report on Agricultural Robots and Drones 2018-2038.
The pilot starts in June, after which tests are conducted continuously for 10 weeks in a test greenhouse planted with Gerberas at the World Horti Center. The Gerbera growers jointly offer a platform to this new technology by contributing to research and further development of the system. The growers are partly funded by the IPC scheme and are assisted in this research by Inno-Agro and the cooperatives of Gerbera and Chrysanthemum. In collaboration with Demokwekerij Westland, the parties repeatedly measure the effectiveness of the solution on the population of Golden twin-spot moth (Chrysodeixis chalcites). "The objective of the pilot is not only to measure effectiveness, but also to improve technology. The drones are taught specific flight behavior similar to the agile flight behavior of this moth says Sjoerd Tijmons from PATS. Kevin van Hecke, co-founder of PATS and drone researcher at TU Delft adds: "You can best compare our drones with bats, a natural enemy of flying insects."
In the summer of 2018, PATS started with a small test set-up at the location of Holstein Flowers, a Gerbera nursery in The Lier, The Netherlands. The first results were positive, after which the group of IPC growers became interested in the technology. According to Jeroen Sanders, researcher at Demokwekerij Westland, "there are currently insufficient effective means available to combat adult flying insects. That is why this technology is a good addition to the total system approach. "
PATS sees its technology not only as an addition to the current available set of control solutions. In the long term the system must also reduce the application of (bio)insecticides for specific pests and it is expected that the grower will have to spend less time on pest monitoring and control. Bram Tijmons, co-founder at PATS: "Our goal is to fully perform the control of Golden twin-spot moths, and later other flying insects, with our system, precisely because of our preventive approach. In addition, our solution does not conflict with the biological control of other pests through targeted control of the insect itself."
When the pilot is successfully carried out, the parties involved intend to scale it up in a practice environment. More clarity on this is expected in August of this year.
Source and top image: PATS Indoor Drone Solutions