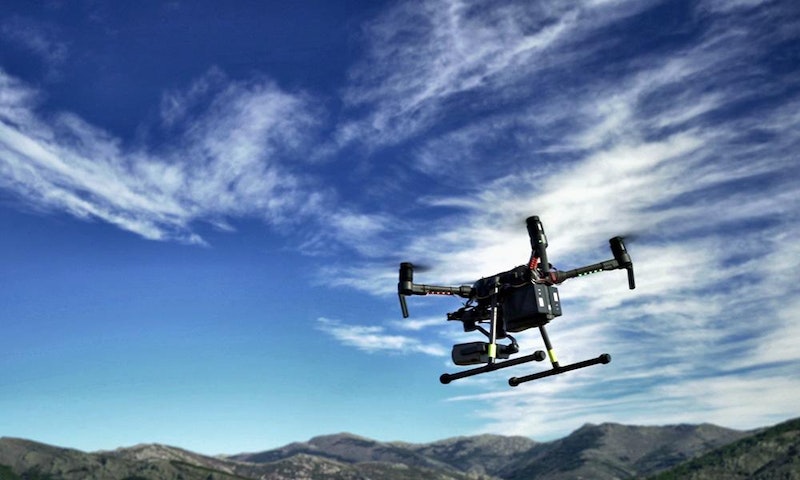 Universidad Carlos III de Madrid (UC3M) is collaborating in a Telefónica R+D+i project, together with the companies Divisek, and Dronitec, in which they have developed a sustainable innovation pilot project for early detection and prevention of forest fires through drone technology. For more information see the IDTechEx report on Drones 2018-2038.
The UC3M's researchers coordinating the scientific part of the project, Fernando García y Abdulla al-Kaff, from the Department of Systems Engineering and Automation, have developed the complete automatic flight system, as well as the interface with which the emergency service can access information about what is occurring in real time.
"The drone we have developed for the project has a thermal camera, an optical camera, and four sensors which allow us to identify the temperature of the device in the environment, the drone's different controllers enable us to determine the internal state of the equipment and the communication system is provided by Telefonica to receive this information in real time," UC3M professor Fernando Garcia pointed.
The communication towers are capable of detecting the origin of a fire in a perimeter of up to 15 kilometers. A hangar with the drone is located inside the towers, to which the thermal sensors, when the outbreak of a fire is detected, send an alarm with its exact location. The drone autonomously flies to that point, even in conditions of limited visibility, and gathers optic and thermal images of the fire, which it sends in real time.
The system also lets the emergency center control the drone to gather information and track the burned environment. Once its mission is complete, the drone returns to its hangar and recharges automatically. "It's a totally novel solution, based on robotics and automation, which won't remove anyone's job, but will instead offer a new tool for emergency services, providing added value and allowing them to operate more safely and to control the situation," the UC3M researchers affirmed.
This initiative, which has been tested on a trial basis in conjunction with the emergency services of the Madrid Autonomous Region, is the first step toward development of technological services that help to prevent forest fires. Its objective is to stay one step ahead of the information, improve decision-making and turn around the statistics that show Spain as the European country most affected by forest fires, according to data from 2018.
Source and top image: Universidad Carlos III de Madrid (UC3M)