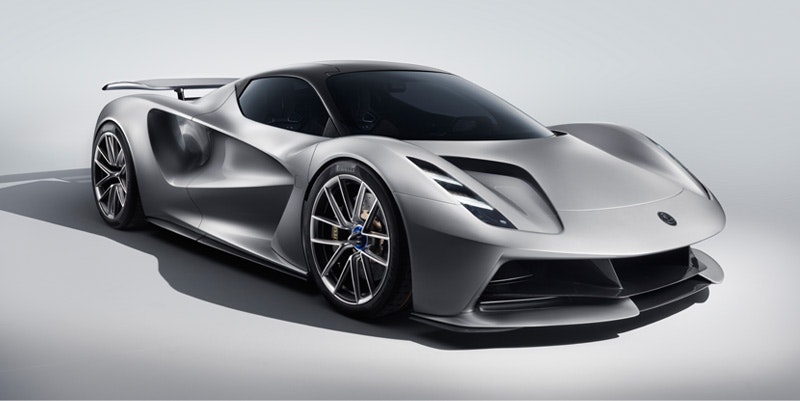 The world's first fully electric British hypercar, the all-new Lotus Evija, has been revealed. The Evija marks the start of an exciting new chapter in the history of an iconic and much-loved British sports car brand. It is the first hypercar from Lotus, and the company's first model with an electrified powertrain. It is also the first completely new car to be launched under the stewardship of Geely. For more information see the IDTechEx report on Electric Vehicles 2020-2030.
Production is limited to not more than 130, making it among the most exclusive cars ever launched. Hethel, close to the historic city of Norwich in the east of England, UK, has been the home of Lotus since 1966. The company has confirmed production of the Evija will begin there during 2020.
Speaking at the unveiling in London, Lotus Cars CEO Phil Popham said: "The Lotus Evija is a car like no other. It will re-establish our brand in the hearts and minds of sports car fans and on the global automotive stage. It will also pave the way for further visionary models."
Russell Carr, Design Director, Lotus Cars, said: "We studied how Le Mans race cars use air flow creatively to go over, under and around the vehicle, but also through it. This concept of 'porosity' is key to the Evija and has enabled us to create a timeless design with exceptional amounts of downforce." The Evija is the first Lotus road car to feature a one-piece carbon fibre monocoque chassis.
At the heart of the Evija is an ultra-advanced all-electric powertrain. It has been developed by technical partner Williams Advanced Engineering, famed for success in motorsport, from Formula One to electrifying the first four seasons of Formula E. The battery pack is mid-mounted immediately behind the two seats and supplies energy directly to four powerful e-motors. This highly efficient system is the lightest, most energy dense, electric power package ever fitted to a road car. With a target weight of just 1,680 kg, it will be the lightest pure electric hypercar ever to go into series production. Evija has five driving modes - Range, City, Tour, Sport and Track. It can race from 0-62 mph (0-100 km/h) in under three seconds and accelerate to a top speed of more than 200 mph (0-320 km/h).
The Lotus Evija features not only the world's most powerful automotive drivetrain, it also boasts the world's fastest charging battery. Thanks to the partnership with Williams Advanced Engineering, the battery has the ability to accept an 800kW charge. Although charging units capable of delivering this are not yet commercially available, when they are it will be possible to fully replenish the battery in just nine minutes. Using existing charging technology - such as a 350kW unit, which is currently the most powerful available - the Evija's charge time will be 12 mins to 80% and 18 mins to 100%. The car's range is 250 miles (400 km) on the WLTP Combined Cycle, or 270 miles on the NEDC Combined Cycle. Lotus is in discussions with external suppliers on a charging solution for customers.
The Evija is priced from £1.7m plus duties and taxes. A £250,000 deposit secures a production slot.
Source and top image: Lotus