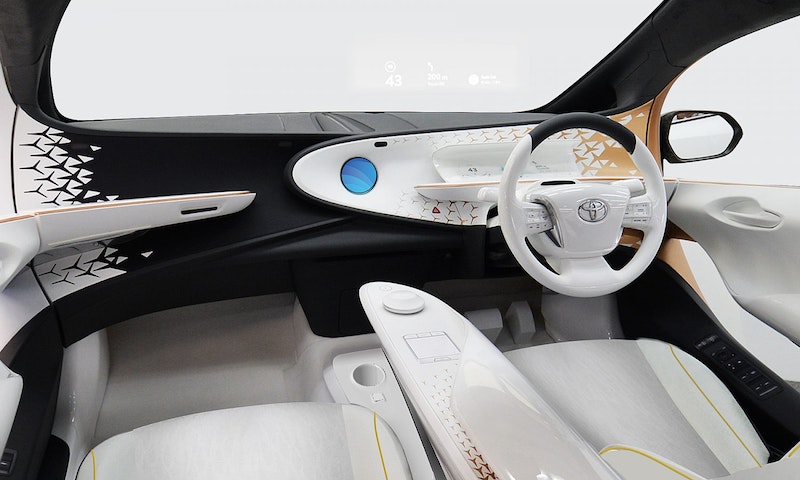 Toyota Motor Corporation (TMC), worldwide partner of the Olympic and Paralympic Games, will provide a full line-up of electrified vehicles, including unique versions of certain vehicles as well as vehicles developed specifically to support the Olympic and Paralympic Games Tokyo 2020. With its electrified line-up, Toyota, together with the Tokyo Organising Committee of the Olympic and Paralympic Games, aims to achieve the lowest emissions target level of any official fleet used at the Olympic and Paralympic Games, thereby also helping to reduce the environmental burden of the Games. For more information see the IDTechEx report on Electric Vehicles 2020-2030.
Toyota will provide a total of around 3,700 mobility products and/or vehicles for Tokyo 2020. The majority, or nearly 90 percent, of the official vehicle fleet will be electrified. Electrified vehicles include Hybrid Electric Vehicles (HEV), Fuel Cell Electric Vehicles (FCEV), such as the hydrogen-powered Mirai, Plug-in Hybrid Electric Vehicles (PHEV), the Prius PHV (known as Prius Prime in some markets), and Battery Electric Vehicles (BEV), including the "APM" (Accessible People Mover) and Tokyo 2020 the e-Palette as well as TOYOTA Concept-i, which will provide a unique and wide-range of diverse mobility during Tokyo 2020. Among the electrified vehicles provided, Toyota will include approximately 500 FCEVs and approximately 850 BEVs, the largest of any fleet for a Games to date.
Out of the approx. 3,700 mobility products and/or vehicles for Tokyo 2020, 2,700 vehicles will be part of the official fleet providing transportation support between venues during the Olympic Games. These will be commercially-available vehicles, such as Mirai, etc. Preliminary calculations suggest that the CO2 emitted by the commercially-available fleet for Tokyo 2020 will average less than 80 g/km, resulting in a reduction by approx. half of the typical amount when compared to a similar sized fleet of mostly conventional gasoline and diesel models. Additionally, further reductions are anticipated during the Games when combined with Toyota's other advanced mobility products and/or electrified vehicles, including the unique versions of vehicles or vehicles specifically designed for use at the Games. As such, Toyota aims to achieve the lowest emissions target level of any official fleet used at the Olympic and Paralympic Games.
Furthermore, to help avoid collisions and reduce/mitigate potential damage or injury, all of the commercially-available vehicles for staff transportation support will come equipped with Toyota's preventative safety technologies, including "Toyota Safety Sense" and "Lexus Safety System +". Additionally, nearly all the commercially-available vehicles will also be equipped with Intelligent Clearance Sonar (ICS), designed to assist with braking in the event of unintended misapplication of the acceleration pedal.
Aside from the official fleet, Toyota will also support Games operations with other vehicles, including the mass-transit Fuel Cell Bus "Sora", assistive vehicles that help lift passengers into their seats or are equipped with an attached slope to allow passengers with wheelchairs access to enter the vehicle via the back door, and other vehicles such as Fuel Cell Forklifts made and sold by Toyota Industries Corporation.
Through its full line-up of electrified vehicles to reduce environmental impact and mobility solutions that combine Toyota Production System (TPS) with diverse mobility, Toyota will support smooth operations for Tokyo 2020, while also supporting the transport of those attending the Games, including staff, athletes, and visitors. Furthermore, through its robots, Toyota will provide support of event operations and unique experiences.
Below is an outline of the main vehicles that Toyota will provide:
Vehicles developed specifically for Tokyo 2020:
APM
200 units to help attendees with special mobility needs travel within Tokyo 2020 event venues such as the Olympic Stadium and Ariake Tennis Park for "last one mile" transportation and relief activities. 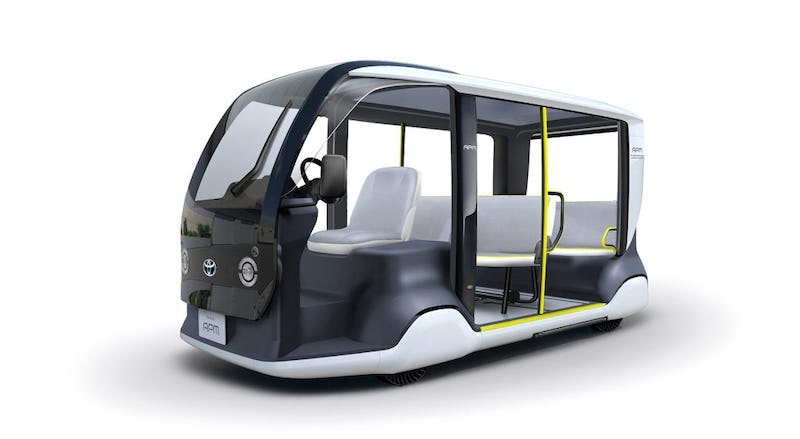 Unique vehicle versions for Tokyo 2020
e-Palette (Tokyo 2020 version)
Toyota's first BEV developed specifically for Autono-MaaS, the Tokyo 2020 e-Palette will support transportation needs of staff and athletes, with a dozen or more running on a continuous loop within the Olympic and Paralympic Village. With a low-floor, electric slope and by stopping precisely at each stop, leaving little to no gap or opening between the curb and the bus, the e-Palette will make travel easier for wheelchair passengers and support smooth transport over short distances. The vehicle is anticipated to feature automated driving (up to SAE Level 4). In addition to having an operator aboard every vehicle to monitor the automated driving operation, Toyota will also provide a digital control system to monitor the general operating conditions of the vehicle.

Toyota Concept-i (Tokyo 2020 version)
With a characteristic "high-tech one-motion silhouette" exterior design, the Concept-i hopes to bring further excitement and attention to the Games through its activities as the operating vehicle at the Olympic torch relay and lead vehicle in the marathon. Also, in addition to the vehicles provided for the Games, the public roads surrounding the Toyota City Showcase "MEGAWEB" in the Tokyo Odaiba/Toyosu area are expected to be used for test rides/drives of vehicles with advanced driving technology. This includes the Toyota Concept-i, which will demonstrate automated driving (SAE Level 4) and its functions, including "Agent conversation", that uses artificial intelligence to understand people, helping people experience new ways to move as well as the future of "beloved cars".

Other vehicles
Mirai
500 will be provided for the transport of Games' staff around Tokyo 2020 official venues.
Walking area BEVs
Toyota will provide approximately 300 units of its standing-type personal mobility devices for use by security/medical staff centering around and within Tokyo 2020 venues, such as the Olympic Stadium and Ariake Tennis Park Furthermore, Toyota is exploring the use of its sitting-type and wheelchair-link personal mobility devices for those in wheelchairs and with difficulty walking.