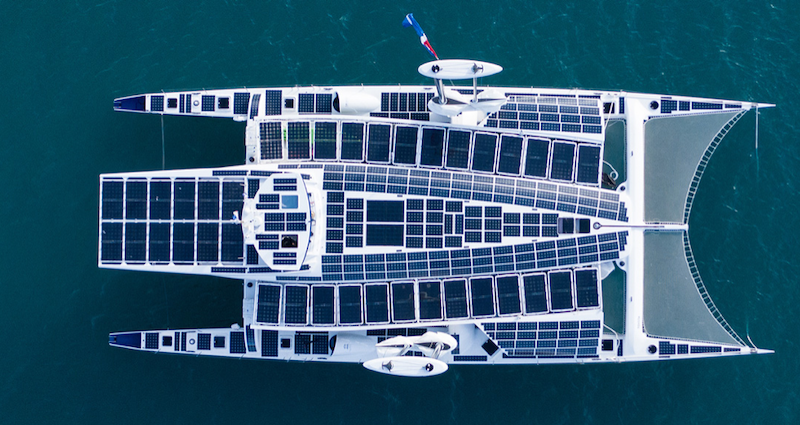 Former racing catamaran turned ship of the future, Energy Observer has made waves as it has been navigating its six-year odyssey around the world as the first energy-autonomous hydrogen vessel. Now, Toyota, official partner of Energy Observer and an avid supporter of their project from the start, announces that it has developed a fuel cell system for maritime applications, with its first delivery destined for Energy Observer.
Embarking in June 2017 from Saint- Malo Port in France, Energy Observer is an electrically propelled vessel of the future that is operated using a mix of renewable energies and an on-board system that produces carbon-free hydrogen from seawater. The operators of the vessel are on a mission to go and meet people in 50 countries and 101 ports during their voyage who are designing the future, with an aim to prove that a cleaner world is not only possible, but that the innovations can open some doors to a new economic expansion. Their activities also demonstrate and share potential solutions to champion an ecological and energy transition, as well as support tomorrow's energy networks as they encourage providers to make the networks more efficient and applicable on a large scale. For more information see the IDTechEx report on Fuel Cell Vehicles 2019-2029.
Previously, Toyota's fuel cell system, which was first introduced in the Toyota Mirai, the world's first mass-produced hydrogen fuel cell electric vehicle, proved its value as a propulsion system for automobiles. However, the company has more recently been exploring the use of its fuel cell system in other applications such as buses and trucks.
Toyota, a company aiming to develop a hydrogen society based on its challenge to "Establish a future society in Harmony with Nature" as stated in its Environmental Challenge 2050, was able to align with Energy Observer's mission and activities. From that common ground, the two have worked closely together on how a hydrogen fuel cell system could be adapted to martime applications, which eventually led to the introduction of Toyota's maritime fuel cell technology and system.
The maritime-specific fuel cell system was developed by Toyota Technical Center Europe in a mere seven months. It required a re-design of the system, followed by the build and installation of the compact fuel cell module. This was accomplished using components first introduced in the Toyota Mirai which were fitted into a more compact module suitable for marine applications. The project successfully demonstrates the adaptability of the Toyota fuel cell technology to a variety of applications, including those outside of land-based vehicles.
"We are very proud to embark the Toyota Fuel Cell System on our oceans passages, and test it in the roughest conditions. After three years and nearly 20 000 nautical miles of development, the Energy Observer energy supply and storage system is now very reliable and we look forward to the next step of the project : Get a reliable and affordable system available for our maritime community. We believe that the Toyota Fuel Cell System is the perfect component for this, industrially produced, efficient and safe. Being an ambassador for the Sustainable Development Goals (SDGs), our mission is to promote clean energy solutions and we share with Toyota the same vision for a hydrogen society." said Victorien Erussard, founder and captain of Energy Observer.
The Toyota Fuel Cell System has proven its benefits already for many years in the Mirai, but more recently also in other applications such as buses and trucks. Using it for maritime transportation is again another step closer to the development of the hydrogen society. Toyota believes that hydrogen is the catalyst for energy decarbonisation and the technology acceptance can accelerate with the Toyota Fuel Cell System modular solution, which can be considered for a multitude of applications.
"We are pleased to be able to further demonstrate the versatility of the Toyota Fuel Cell System. Our European R&D team has worked hard with the team of the Energy Observer to create and install this module in the existing boat. This project shows that the Toyota Fuel Cell technology can be used in any environment and can be spread throughout many business opportunities. It is always inspiring to work with people who aim for the same goals and this project supports even more our vision for a hydrogen society." said Dr Johan van Zyl, President and CEO of Toyota Motor Europe.
To ensure compatibility, the Toyota fuel cell module was tested with Energy Observer while the boat was at dock at the end of last year. Currently, the system is undergoing its final full power testing is at sea prior to the Energy Observer officially setting sail from Saint- Malo Port, scheduled in Feburary, as they embark for their 2020 Tour. Energy Observer is set to benefit from the Toyota maritime fuel cell system capable of delivering more power, efficiency, and reliability as its tour route includes crossing both the Atlantic and Pacific Oceans.
Source and top image: Toyota