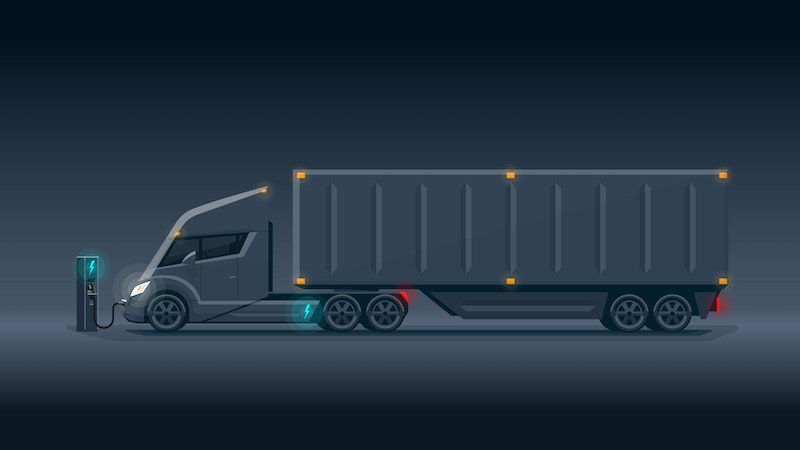 The automotive industry is experiencing a difficult time due to the Coronavirus, with severe shocks both to the supply and demand. Nonetheless, the industry will need to retain its focus on key transformation trends such as autonomy.
Making a business case out of autonomous however, is not always straightforward. Some OEMs and Tier Ones are already suggesting that there is no business case for level 3 autonomy. This is because the technological complexity and costs jump as we transition from 2 to 3, whilst the value-add increases only incrementally. As such, there is now a serious discussion to focus instead on level 2.5, but design the system and development path such that it can be level-4 ready. See the IDTechEx report "Autonomous Cars and Robotaxis 2020-2040: Players, Technologies and Market Forecast", for more detail on diffusion of different levels of autonomy in cars and robotaxis.
In parallel, companies are now finally realising that the autonomous mobility world does not begin and end with cars, and that there are numerous nearer term and simpler opportunities existing which often demonstrate a clearer business justification. Since the technology development platform can have significant common parts across all the sectors, it makes little sense to pursue siloed developments focusing only on cars.
One such significant opportunity is in autonomous trucking. In this article, we discuss various aspects of autonomous trucking, outlining the latest trends and developments, discussing the remaining challenges and development opportunity, and offering a long-term market perspective and forecast. To learn more about this field, please see the IDTechEx report ""Mobile Robots, Autonomous Vehicles, and Drones in Logistics, Warehousing, and Delivery 2020-2040"". This report offers a detailed analysis of technology, markets, and players active in using autonomous mobility across the entire logistic and delivery value chain. This includes autonomous robots in factories and fulfilment centres, autonomous industrial vehicles such as forklifts, autonomous trucks and vans, and last mile delivery pods, robots, and drones.

The trucking industry is suffering from multiple pain points, one of which is the shortage of long-haul drivers. The American Trucking Association estimates that the US industry alone currently suffers a shortage of 60k drivers. This is forecast, based on current trends, to rise to 160k drivers by 2028. Clearly, this acts as a limiting factor constraining growth.
The addressable market is also significant. In the US, it is estimated that 1.9M people are employed as heavy and tractor-trailer truck drivers. The average salaries are around 41.3k$/yr. As such, the amount spent on driver wages each year in the US alone is $78Bn. In time, this colossal sum can be transferred from wages to technology and service costs offered by autonomous truck developers.
Unlike the case in private autonomous cars, there exists a clear commercial incentive. The pie chart below shows a typical split of the operating cost of a truck. Clearly, drivers represent a substantial proportion, i.e., 30%. Furthermore, there are early hints that autonomous driving can optimise fuel consumption, e.g., 7-10%, and also reduce tire damage.
Finally, there is the question of safety and asset utilization. Currently, driving hours are constrained by regulation in order to boost safety, which is a major challenge. According to statistics from G7, the largest commercial vehicle management platform in China, there is a major vehicle accident in every 25 logistic vehicles per year. This limits asset uptime. It is hoped that autonomous driving can increase safety and asset uptime.
Autonomous mobility has thus the potential to address many clear pain points. So the question is, what is the technology and commercial status, and what does the future market deployment look like? In the rest of this article, we will answer these questions. To learn details please see "Mobile Robots, Autonomous Vehicles, and Drones in Logistics, Warehousing, and Delivery 2020-2040". 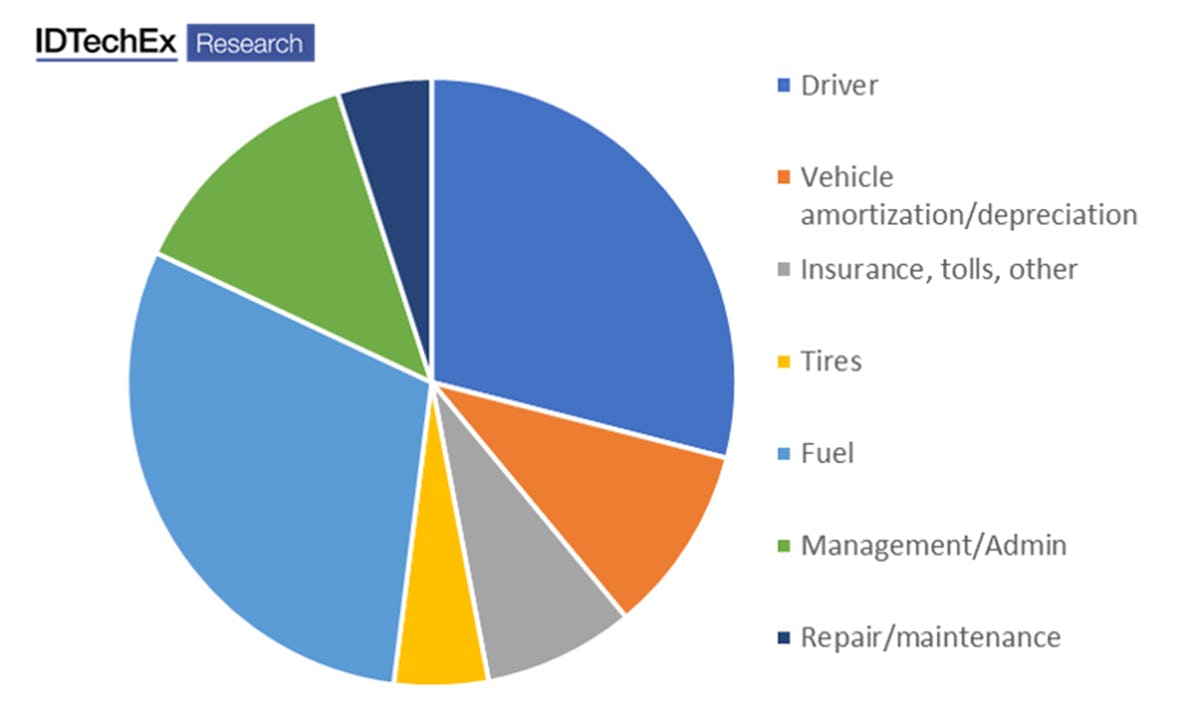 Trucks are already equipped with higher levels of ADAS function. For example, Daimler is now offering cruise control on 100% of its trucks. When it comes to higher levels of autonomy, two different routes are being taken.
Multiple firms are developing technology to first autonomize highway driving. The argument here is that highways are simpler environments in relative terms compared to chaotic urban driving. The roads can often be long and straight, especially in large parts of the US. This relaxes the challenge in autonomous driving. On the other hand, the speeds are high, and the braking distances are long, e.g. 100m. As such, the perception technology will need to see much further ahead than might be the case with cars. This places additional requirements on the sensor suite technology (radar, lidar, camera, etc), as well as the software. This requirement will likely lead to different technology choices compared to cars. Furthermore, the vibration levels on ICE trucks, likely used in long-haul, are more severe, placing further challenges on long-term component reliability, especially if mechanical non-solid-state solutions are deployed.
In addition, there is a challenge of what to do when the truck is about to enter the more chaotic urban environment. Various solutions have been proposed, including humans taking over at change-over centres located near the city edges. The argument here is that fewer drivers will be needed given the shorter trip times in the final miles and that more drivers are likely to be available since it is not long-haul. As such, this arrangement will still reduce the payroll burden and help alleviate the driver shortage challenge. Teleoperation will likely also play a role at this stage.
The business model choice is also interesting. Some are developing the technology, hoping to sell it as an autonomous vehicle. Others are proposing to offer the fleets in a transport-as-service model, charging perhaps 40-50 cents per Km driven. The latter will likely result in a lower barrier to purchase, as well as faster time-to-market and generated income. It will also offer the chance to gather data, iterate, and improve the design especially the software. It will, however, require sufficient funding to absorb and maintain the cost and risk of autonomous trucks on the provider' books, which can be a challenge for start-ups grabbling with high development costs. The former model will resemble the classic car-sell model. However, it will represent a larger barrier to purchase, as many truck fleet operators have geared their finances to service their operating costs and will not easily be able to muster up enough capex to pay for the currently much higher cost of autonomous trucks. The solution will likely reside in innovative financing offered by major manufacturers.

The other approach is to start in very constrained environments. For example, TuSimple has suggested that in China it is focused on low-speed autonomous solutions for port logistics. Einride is also focused on low-speed transport between a warehouse and terminal. The roadmap is to go from fenced to nearby environments (already done) before graduating the technology to rural, then highway, and then final urban.
The idea here is that low-speed operation in a controlled environment lowers the technological complexity, thus cutting down the deployment challenges and time. It will provide, nonetheless, a chance to deploy a fleet, which in turn allows the business model to be refined, the value proposition to be demonstrated in collaboration with a customer and in a real scenario, and the software stack iterated and upgraded to achieve better results.
These conditions have allowed the design of truly driverless trucks from the bottom-up. As such, the autonomy level is high. Currently, there are teleoperators remotely monitoring and controlling the driverless trucks. The key to making commercial sense is that the fleet size to teleoperator ratio be made as large as possible, e.g. >>10. This requires technological innovation, especially better autonomy and safety at the vehicle level, which would translate into lower required intervention numbers by the teleoperators.
The decision to start from low-speed constrained environments allows limited trip distances. This, in turn, will enable the deployment of fully electric trucks. They are easier to design and control as the system is electric. Given the lower part numbers and increasingly modular traction platforms, it aids designs of novel form factors. It will, however, require better route planning to best utilize the battery and to minimize charging downtimes. The trend towards electrification in light commercial vehicles, as well as heavy-duty trucks, is very significant. To learn more about this trend please see the IDTechEx Report "Electric Trucks 2020-2030".

The short- and long-term outlooks

The chart below shows the current status and outlook. Today, the accumulated fleet size is still small. Essentially, the suppliers as well as the end users are jointly learning. There are multiple projects live across the world. Some companies have recently failed, e.g. Starsky as expected, but new ones, especially in Europe where there is a gap, are expected to form.
Overall, there is a market pull for autonomous driving. The realization is in this case largely technology limited. This cannot be said about every sector which autonomous mobility seeks to penetrate. In some cases it is a technology looking for a problem.
We assess that the market will remain in the learning phase until 2024. Within this time accumulated fleet sizes will certainly increase, but the character of the market will be one of early deployment and learning. Level 4 autonomy in certain highway conditions and teleoperated or telemonitored driverless low-speed trucks in constrained environments will take off likely beginning from 2024. True level 5 will take long. We currently estimate that this will require longer than a decade realize. By that time, however, level 4 (or teleoperated driverless trucks) will also have made a significant impact, representing more than 20% of annual truck sales.
In the end, this is a colossal transition that simply cannot be ignored even in the current climate of cash flow challenges in the automotive industry. To learn more, please refer to the report "Electric Trucks 2020-2030" which provides an analysis of technologies, players, and markets. It includes detailed long-term (20-year) market forecasts assessing unit numbers by autonomy level and expected revenues. The cost models are segmented by components and software costs. 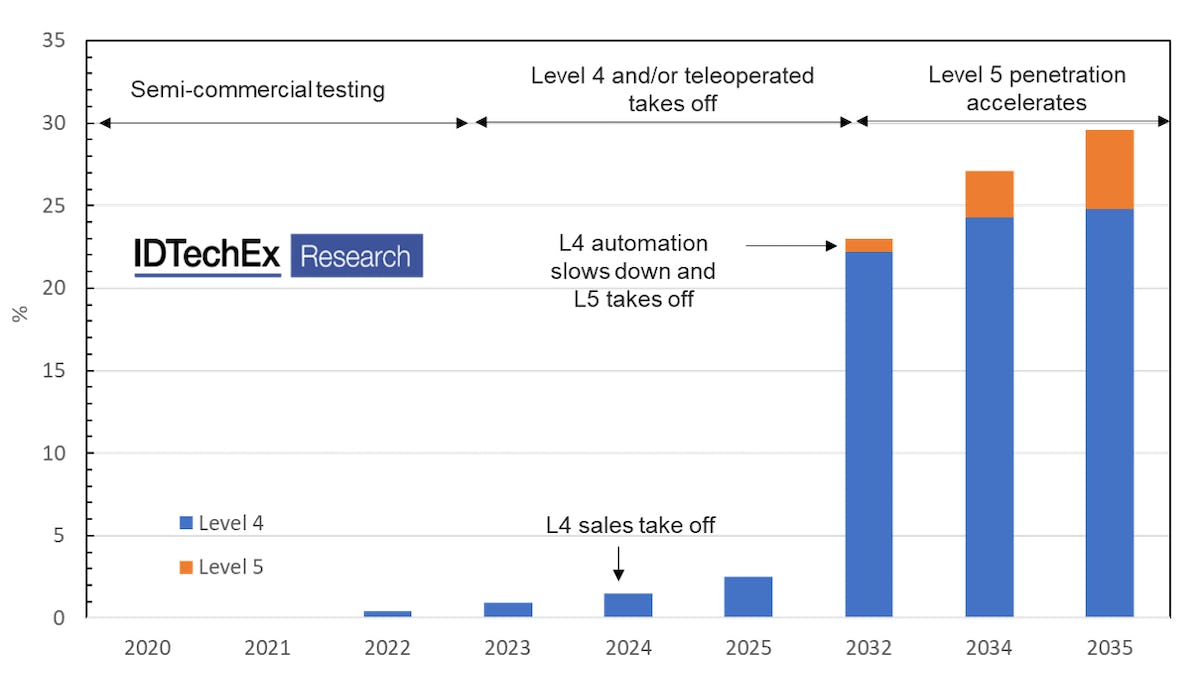