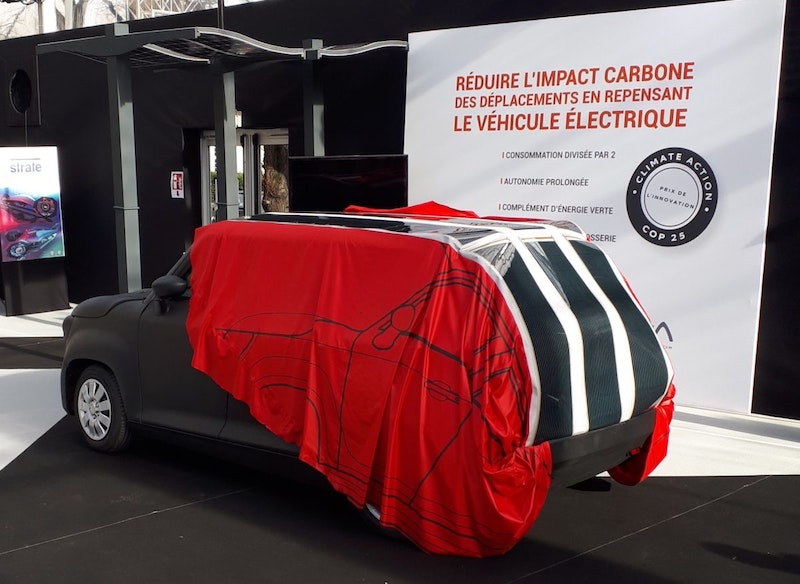 Armor, accompanied by its partners Gazelle Tech and ACPV, recently presented a concept electric car with solar cover in Paris. Gazelle Tech is a French startup wanting to make a car aimed at developing countries, using half the energy of comparable cars. Gazelle Tech finished a second fundraising round of $1.2 million last year. For further information see the IDTechEx report on Solar Cars, Buses, Trucks, Trains 2020-2030
The Gazelle, a lightweight and low energy consumption car
Manufactured in Bordeaux at the Gazelle Tech plant, this new Gazelle (the name given to the car) is the electric version of the combustion engine concept already exhibited last year in France. Just like the combustion engine version, this vehicle has a self-supporting chassis made of composites. This innovative and patented technology called Aerocell makes the car extremely lightweight. It only weighs 650-700 kg, compared to around double for a comparable 5-seater vehicle.
The minimized weight significantly improves the car's energy consumption, an improvement of some 40% compared to an equivalent model. The Gazelle therefore has a range of 180km at only 4 hours charging using the domestic power supply according to the company.
A solar cover providing protection and increased range
A notable feature of the vehicle exhibited in Paris is its retractable photovoltaic protective cover, invented and patented by ACPV. With the drive motor installed in the car's rear fender, the cover can be easily rolled out and back again without human intervention. From a technical point of view, the cover is composed of a stain-resistant fabric in order to minimize water consumption when cleaning the vehicle, with 9 ASCA solar modules covering a total surface area of 4m².
The modules provide supplementary power to the vehicle and increase its range (up to an additional 15km per day with a target of 30km per day within 3 years, based on 8 hours' outside exposure of the vehicle per day).
Source and top image ASCA