Launch of the ABT e-Transporter 6.1 With Aero Package 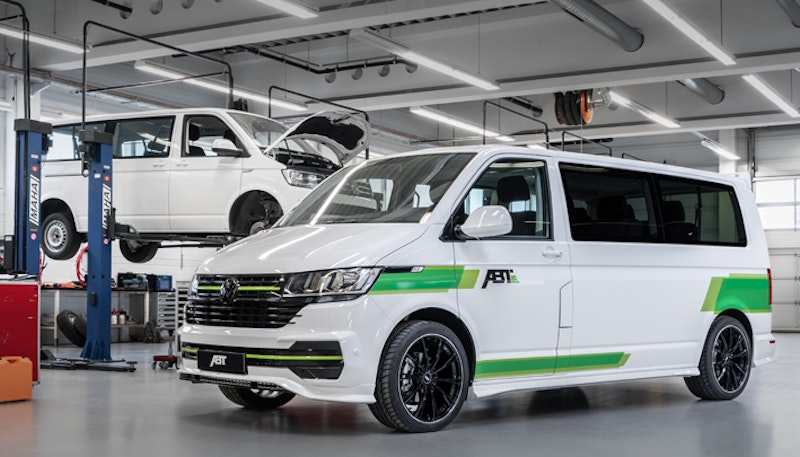 The beginning of June sees the start of production of the ABT e-Transporter 6.1. As with its predecessor, ABT e-Line, an official premium partner of Volkswagen Commercial Vehicles, is responsible for converting the vehicle to electric drive. The Schaeffler Group is acting as a strategic co-operation partner in this process. Together with the ABT Group, they have been performing pioneering work in Formula E as part of a technological partnership since 2014. The ABT e-Transporter 6.1 delivers a maximum output of 83 kW and a maximum torque of 200 Nm. The vehicle will be available with top speed options of either 90 km/h or 120 km/h. The range is between 105 and 138 km depending upon specification (according to WLTP), (gross) battery capacity is 37.3 kWh and electricity consumption between 27.0 and 35.8 kWh/100 km. For more information see the IDTechEx report on Electric Motors for Electric Vehicles: Land, Water, Air 2020-2030.
Competent and innovative - ABT e-Line brings excitement onto the road
As a traditionally innovative company, ABT Sportsline has been conducting research in the field of e-mobility since 2009. In 2013, the first VW Caddy converted to electric drive by ABT appeared on the road. Since then, the electric vehicles have driven several million kilometers on delivery journeys. The experiences gathered during tough everyday use were a valuable contribution to the development of the next vehicle generation. The 2018 founded ABT e-Line GmbH, which is fully focused on e-mobility, is responsible for this field of work.
With its involvement in the electric racing series FIA Formula E as the only German team, the ABT Group showed visionary qualities in 2013 and has since then not only celebrated two championship titles - following the company motto, the experts also transferred a great deal of electrical engineering know-how "from the race track onto the road". At the side of its partners Schaeffler and Audi, ABT improves its system knowledge and gains new findings in the fields of braking energy recuperation and thermal management.
ABT e-Line GmbH
Karla Kanz
Phone: +49 (0) 831-571 40 58
Email: media@abt-sportsline.de
Imprint
Press-Agency IKmedia GmbH
Andreas Hempfling
Phone: +49 (0) 911-570 320 16
Email: ah@ikmedia.de
Source: IK Media GmbH