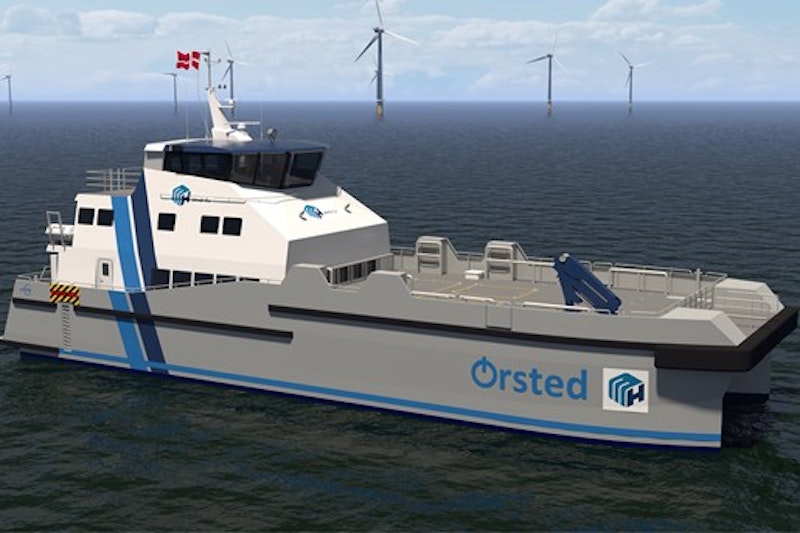 Danfoss Editron has been selected by Danish shipbuilder and operator MHO-Co to deliver the drivetrain systems that will power the UK's first two hybrid crew transfer vessels (CTV). The CTVs will serve Ørsted's Hornsea Two offshore wind farm, which will be located approximately 55 miles off the Yorkshire coast in the North Sea when it enters operation in 2022.
A variety of vessels are used during the construction, maintenance and operation of offshore wind farms. Designed to work in the sector exclusively, CTVs are used to transport technicians and other personnel to and from the wind farms. For further information see the IDTechEx report on Electric Leisure & Sea-going Boats and Ships 2021-2040.
Both of the CTVs will be equipped with a Danfoss Editron serial hybrid system consisting of four propulsion motors. The systems will also include DC-DC converters for the vessels' batteries. It is anticipated that both of the CTVs, which will be capable of operating in either fully-electric or hybrid mode, will save approximately 140 tons of CO2 compared to traditional diesel-powered vessels.
The 35m CTVs will both be capable of carrying 24 passengers and will be fitted with a large lounge area and eight cabins. They will also have the possibility of featuring an innovative offshore access system on the front deck, allowing for the safe transfer of up to six people and cargo to offshore structures. This will eliminate climbing, increase workability and reduce the transfer time from vessel to offshore structure. The vessels are due to be delivered in the second quarter of 2021.
Commenting on the project, Danfoss Editron's Marine Director Erno Tenhunen, said: "This project, the UK's first hybrid CTVs and some of the first anywhere in the world, will open the market for more hybrid CTVs. Previously, the size of electric motors and components were too big for CTVs. Our compact and lightweight technology has overcome this issue however and solved the challenge faced by vessel designers, shipyards and end customers. Our EDITRON system can easily place all hybrid propulsion components into a limited space, plus allows flexibility on battery selection, system concepts and machinery room design."
Mik Henriksen, MHO-Co's CEO, added: "Working with Danfoss Editron shows that we are at the forefront of the green transition in the industry. These two hybrid vessels naturally fit the offshore wind industry's own focus on renewable energy, while the electric motors significantly reduce CO2 emissions, which is an important factor. In fact, these new CTVs make it possible to eliminate the discharge of particles when idling. We've already seen that this is something that the industry is taking notice of."
Source and top image: Danfoss