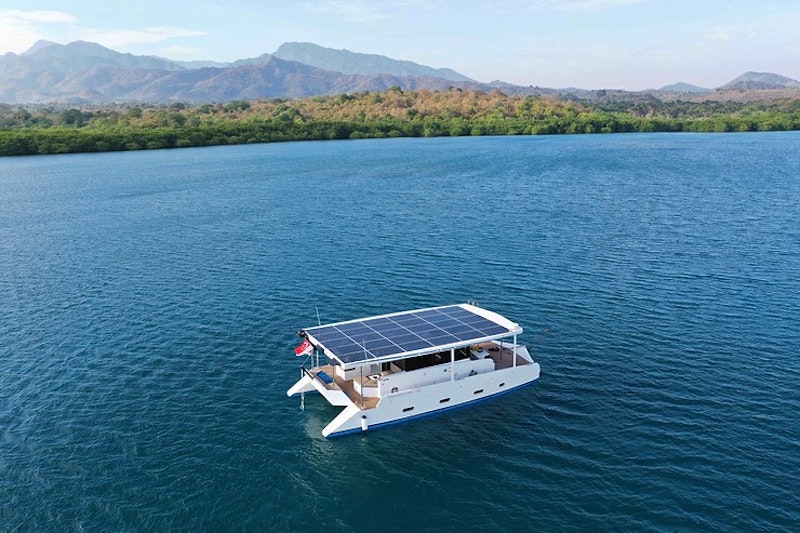 Last week Azura Marine completed of the 220 nautical mile circumnavigation of Bali with their recently launched Aquanima 40 Solar Eclipse. The entire cruise was completed using nothing but the power of the sun to drive the catamaran's electric motors and charge the batteries to enable night-time cruising and usage of all navigation / domestic systems including induction stove, fridge, hot water, air conditioning, filling of the 5 dive tanks, regular charging of the Azura Marine Manta 2.0 electric outboard on the yacht's Zodiac tender and fresh water production.
The objective of the circumnavigation was not only to test the range capabilities of the yacht, but also to test her in a wide variety of weather conditions whilst also putting all of the yacht's onboard systems to the test to show how the yacht truly performs in scenarios as would be encountered by the cruising owner. For further information see the IDTechEx report on Electric Leisure & Sea-going Boats and Ships 2021-2040.
"It's been an incredible and enjoyable experience and, let us be honest, this is a world premiere!" commented Azura Marine CEO Julien Mélot, adding "some doubts have been raised by the online community about the sea worthiness and windage of our first Aquanima 40 since her launch. Let us just say that in Bali, not a single leisure craft - or large cruise vessel for that matter - is leaving their moorings in the windy month of August (winds average at 15 knots from June through to the end of August in Bali, with big swells coming straight from the Southern Indian Ocean.) Yet, we casted off despite the unequivocal reluctance of the authorities to issue our cruising permit. For us, this was the golden opportunity to prove that not only the boat is safe in tough conditions but that she can cruise limitlessly in those conditions without burning a single drop of fuel, while offering great comfort to her guests, of course. With this circumnavigation, we have finally been able to put the yacht to the real test. Can we sail in 20+ knot constant wind with choppy seas and overcast skies? Yes. Can we sail at night? Yes. Can we fill 5 dive tanks every day from solar power without substantially affecting the boat's range? Yes. Can we recharge the electric tender battery after using it all day whilst diving? Yes. Can we use every system in the galley including fridge, hob and oven without being concerned about battery consumption? Yes. Can we stand on the roof at night, star gazing and fly drones to capture incredible images of the yacht with her underwater and roof lights making the whole bay glow? Yes!"
A huge mix of weather conditions was encountered including clear calm days, all day winds of over 20 knots, 4 knot head currents when passing through the tight Bali/Java straits, swells of over 3 metres and completely cloudy days with no apparent sunlight.

The yacht took this all in her stride and her crew of 4 were able to drive her at average speeds of 4.7 knots and maximum speeds of over 9 knots. Not a single drop of fossil fuel was used, no emissions, no pollution and no disturbance of marine life. As far as energy is concerned, this voyage did not cost the crew a single cent. The cruise started and ended from a mooring without the yacht ever visiting a marina or the shore for water supplies or shore charging. Drinking water and fresh water for the showers and domestic systems came from rainwater automatically collected from the solar roof, from the air conditioning condensate and from the onboard water-maker.
This cruise, and her recent sea trials, have proven the yachts' ability to cruise non-stop, 24/7 on solar energy only. With approximately 30% overcast conditions, the solar roof produced an average of 45 kWh per day. Peak solar power production was 10 700 W with typical daytime production of 8 kW per hour between 10AM and 2PM whilst consumption by the motors, navigation and domestic systems (fridge, air conditioning etc) were between 2 and 6 kW per hour. This excess ensured that the yachts' 60 kWh battery bank could be kept fully charged and ready for night-time cruising when needed. The Aquanima 40 is the world's only commercially available yacht that can cruise 24/7 without any need for generators, diesel engines or shore plug in - all the power comes from sunlight.
The hulls of the yacht are scientifically designed with highly efficient full displacement hydrodynamic forms with the principal objective of reducing resistance (as opposed to achieving higher speeds) to enable minimal energy consumption and therefore continuous operation purely on solar electric power.
Commercial Director Simon Turner commented, "we have had an unprecedented amount of interest in the boat from all over the world in the short time since Solar Eclipse was launched. We now have the data to show customers that the boat is truly self-contained and it is absolutely clear that our customers are wanting something different and to ditch fossil fuels altogether. This trip was just how a real owner might use the boat. Some long passages, night passages, bay hopping, diving, exploring ashore and, of course, cooking up some great meals."
Customers can also increase speed and reduce energy consumption by opting for a mast and sails package which will even be capable of upwind performance. All yachts carry an automatically engaged emergency generator should the operator misuse the onboard energy management system.
Solar Eclipse carries a 6 person tender which is powered by Azura Marine's own electric outboard motor Manta 2.0. The portable Li-Ion battery pack for the tender is charged directly from the yacht and can just as easily be charged when ashore.
Source and images: Azura Marine