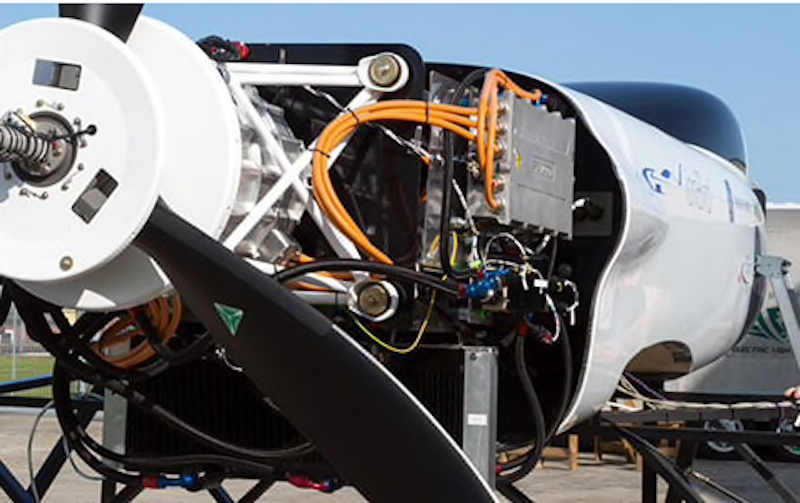 Rolls-Royce has completed testing of the ground-breaking technology that will power the world's fastest all-electric plane. All the technology has been tested on a full-scale replica of the plane's core, called an 'ionBird', including a 500hp electric powertrain powerful enough to set world speed records and a battery with enough energy to supply 250 homes.
The plane is part of a Rolls-Royce initiative called ACCEL, short for 'Accelerating the Electrification of Flight'. The ACCEL project team includes key partners YASA, the electric motor and controller manufacturer, and aviation start-up Electroflight. The team has been developing the technology while adhering to the UK Government's social distancing and other health guidelines and the systems will soon be integrated into our 'Spirit of Innovation' plane. There is a long history of iron-birds in aviation for testing propulsion systems ahead of flight, but in this case Rolls Royce have named the test airframe 'ionBird', after the zero-emission energy source propelling the aircraft. For more information see the IDTechEx report on Manned Electric Aircraft 2020-2030.
UK Business and Industry Minister Nadhim Zahawi said: "From trains to planes, our transport of the future will be powered by clean, electric sources - with companies like Rolls-Royce developing the tech to help meet our net zero ambitions. The completion of ground-testing for the government-backed ACCEL project is not only a step towards an exciting world record attempt, but a leap towards developing all-electric and hybrid-electric planes that one day could ferry large numbers of passengers around the world."
The dedicated team have tested each and every component of the system including:
Rob Watson, Director - Rolls-Royce Electrical, said: "Rolls-Royce is committed to playing a leading role in reaching net zero carbon by 2050. The completion of ground-testing for the ACCEL project is a great achievement for the team and is another important step towards a world record attempt. This project is also helping to develop Rolls-Royce's capabilities and ensure that we remain a leader in delivering the electrification of flight, an important part of our sustainability strategy."
Bremont, will be the official timing partner for the all-electric speed record attempt. The British luxury watch maker has also helped develop the design of the plane's cockpit which will feature a stopwatch, while the company has machined canopy release parts at its Henley-on-Thames manufacturing facility.
The first flight is planned for later this year and the team are aiming to beat the current all-electric flight world record early next year. Half of the project's funding is provided by the Aerospace Technology Institute (ATI), in partnership with the Department for Business, Energy & Industrial Strategy and Innovate UK.
Mark Scully, Head of Technology for Advanced Systems & Propulsion at the Aerospace Technology Institute, said: "The significance of reaching this milestone should not be underestimated. The ACCEL team is pioneering the integration of high-performance batteries, motors and drives to deliver an electric propulsion system in an ambitious flight test programme. These technologies and the systems integration needed to utilise them hold great potential for future sustainable aviation, which is why the ATI is proud to support the project."
Source and top image: Rolls Royce