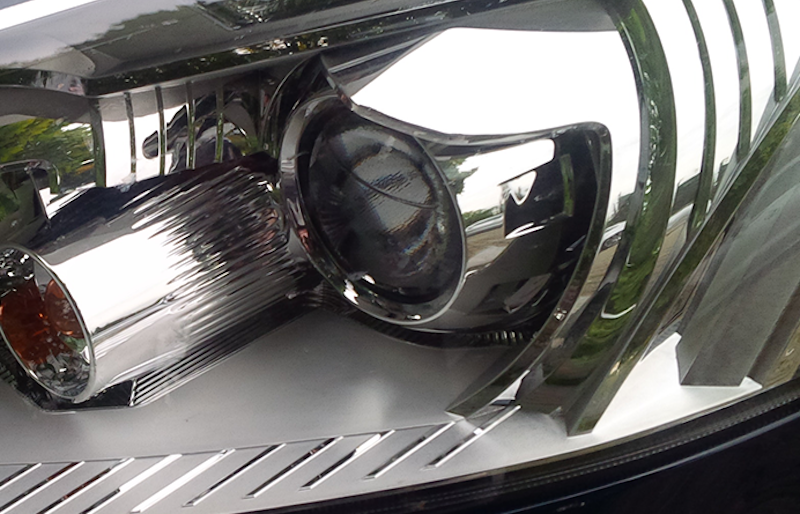 As a result of modern Advanced Driver Assistance Systems, the use of radar technology has become indispensable for the automotive sector. A wide range of systems for adaptive speed control, lane-change support, collision avoidance, and pedestrian and cyclist detection has paved the way for autonomous driving. With the installation of a large and growing number of sensors together with the limited availability of suitably exposed space for them on the vehicle body, there is almost no space left for the installation of sensors. The Fraunhofer Institute for Organic Electronics, Electron Beam and Plasma Technology FEP and its two partners are jointly developing a solution for the integration of radar sensors into the front headlights of a vehicle as part of the RadarGlass project funded by the German Federal Ministry of Education and Research (BMBF promotional reference 03VP03202 FEP).
Advanced Driver Assistance Systems are becoming increasingly important in the automotive industry. The number of sensors required in vehicles is constantly increasing due to the increase in the number of assistance systems and ever higher demands on the manufacturers of motor vehicles, especially for the development of autonomous vehicles. However, the space for housing these sensors in the vehicle is limited, so new solutions must be found for accommodating them. For further information see the IDTechEx report on Automotive Radar 2020-2040: Devices, Materials, Processing, AI, Markets, and Players.
The recently completed project "RadarGlass" offers an approach to this. By integrating the radar sensors into the front headlights of a vehicle, they are protected from snow, ice and rain and the outer car body is not affected. Designers of the future car generations are not restricted in their creativity by additional sensor structures somewhere on the vehicle.
Scientists from the Fraunhofer FEP and its project partners initially investigated which thin-film systems can be used to efficiently control radar waves without restricting the task of lighting of the headlight. To this end, a thin visually transparent functional coating is being developed for a module that will be mounted in the headlight. This coating will be able to shape and direct radar beams in a specific way, depending on the requirements of the application. For example, radar beams can be deflected to the side in order to detect and recognize pedestrians. The beam shape can be adjusted for short or long range like an eye. To shape and direct the radar beams, small areas of the coating must be precisely structured by laser so that they can act as propagation antennas for the radar waves.
Dr. Manuela Junghähnel, project manager at the Fraunhofer FEP, explains: "As part of the project, we have developed a thin-film system that is almost transparent in the visible spectrum, which can form high-frequency waves by using a special pattern structure. The manufacturing process has been optimized to such an extent that the coating doesn't affect the color of the light and withstands temperatures between -30°C and +120°C."
A first demonstrator has been designed for a long-range radar. This should allow the radar to be focused in a narrow beam in the direction of travel with a directional power gain of 100 fold (beam width 5° / antenna gain 20 dBi). Obstacles can potentially be detected at a distance of up to 300m.
In addition to the Fraunhofer FEP, the Institute of High-Frequency Technology at RWTH Aachen University and the Fraunhofer Institute for Laser Technology ILT are also involved in the RadarGlass project. The experts of the Institute of High-Frequency Technology at RWTH Aachen University simulated the design of the antennas and verified the simulations with data in the 76 GHz - 81 GHz band. This allowed the suitability and performance of the radar reflector to be determined. The researchers at the Fraunhofer ILT developed a high-precision laser process for the ablation of the structure into the coating for the antenna elements.
The "RadarGlass" project has opened up a wide range of applications in the automotive and automotive supplier industry, with a variety of impulses expected to result from the current development trend towards autonomous vehicles. In addition to licensing agreements, further collaborative projects with industry are being sought for incorporating these radar modules into serial production.
Source: Fraunhofer FEP