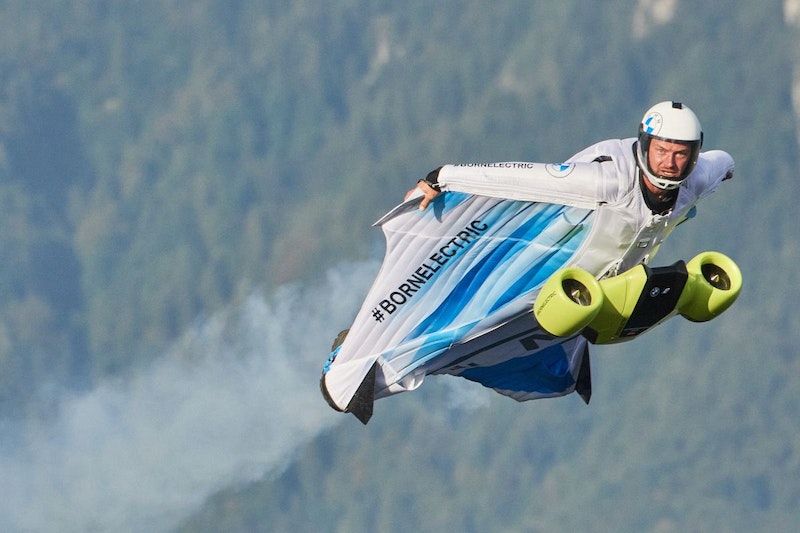 The BMW Group has presented the first electric drive system for a wingsuit with which the centuries-old dream of flying can be realised in a completely novel way. The innovative drive module and the likewise entirely newly designed wingsuit were developed in a cooperation between BMW i, Designworks and professional wingsuit pilot Peter Salzmann from Austria.
The long-term experience and the BMW i brand's pooled development competence have now been utilised in a completely innovative way. The result is an extremely powerful, compact and light drive and energy storage package for a unique flying experience with the Electrified Wingsuit. The fly unit comprises two encased carbon propellers, so-called impellers, each delivering a power output of 7.5 kW, a speed of around 25,000 rpm and a total output of 15 kW, which is available for approximately 5 minutes. The design of the drive unit and the likewise exclusively developed wingsuit is the result of a cooperation between Peter Salzmann and the creative team from Designworks. For further information see the IDTechEx report on Electric Vehicles: Land, Sea and Air 2021-2041.
Around 3 years passed from the idea of a wingsuit flight with electric extra boost to the premiere in the Austrian alps. The electric twin-propeller drive system including an energy storage unit were perfectly integrated into the front of the wing suit. The tests in the wind tunnel at the BMW Group Aerodynamics Testing Centre in Munich were a significant part of the development programme for the project.
The project was triggered by Peter Salzmann's aspiration to raise wingsuit sport to a new level. The 33-year-old Austrian is a skydiving instructor and has meanwhile also made base jumping and skydiving his profession. In addition to skydiving training and wingsuit flying, his repertoire includes film stunts and show appearances. When jumping from cliffs or out of an aircraft, Salzmann uses the textile layer stretched between the arms and legs of his wingsuit as a paraglider that allows him to generate a horizontal flight movement from the fall velocity and the airflow. With each metre of descent, up to three metres of horizontal flight can be achieved. Wingsuit skydivers can reach speeds of more than 100 km/h.
The aim of the electric drive system is to increase the performance of the wingsuit in order to achieve a better constant glide flight, thus allowing longer distances to be covered. Upon activation, Salzmann explains, the pilot experiences immediate acceleration, allowing them to fly at speeds of more than 300 km/h. For the maiden flight with the Electrified Wingsuit Salzmann was flown by helicopter together with two other wingsuit pilots over the mountain tops of his Austrian homeland. Directly after the jump from an altitude of 3,000 metres, all three flew in formation in the direction of a mountain massif. With the aid of the electric drive Salzmann accelerated faster than his colleagues and was able to fly across the peak in steep flight. After flying a further curve, he met up with the other two pilots who had flown in glide flight around the mountain. The three wingsuit pilots finally opened their parachutes and landed at the agreed destination.
Peter Salzmann is firmly convinced that electric drive technology will shape the future, not only on the road but also in the air. To him, the project demonstrates perfectly which previously undreamt-of possibilities can become reality with the help of electric mobility.
Source and top image: BMW Group