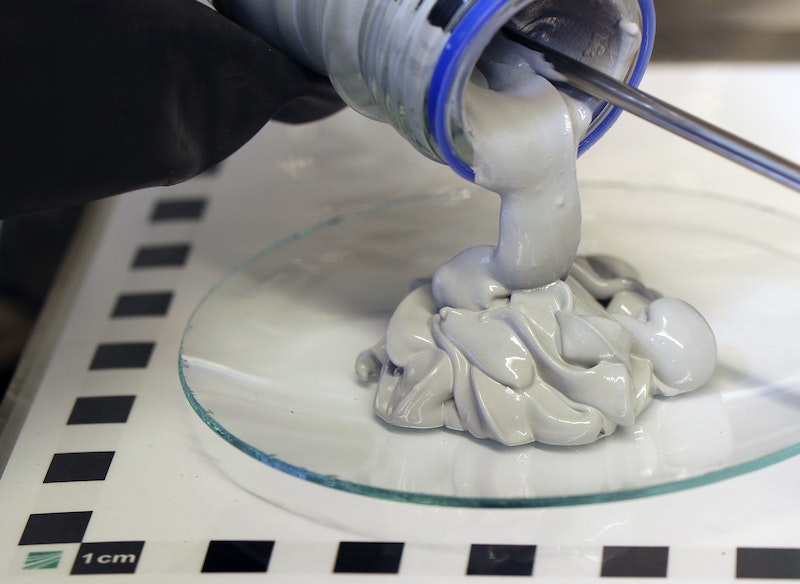 Hydrogen is regarded by many as the future of propulsion technology. The first hydrogen-powered cars are already in action on German roads. In the case of e-scooters, however, installation of a high-pressure tank to store the hydrogen is impractical. An alternative here is POWERPASTE. This provides a safe way of storing hydrogen in a chemical form that is easy to transport and replenish without the need for an expensive network of filling stations. This new paste is based on magnesium hydride and was developed by a research team at the Fraunhofer Institute for Manufacturing Technology and Advanced Materials IFAM in Dresden.
Gasoline and diesel engines, which were powered by fossil fuels, will soon be sidelined by climate change. Instead, new propulsion systems will be required. One fuel with a big potential is hydrogen. Hydrogen vehicles are equipped with a reinforced tank that is fueled at a pressure of 700 bar. This tank feeds a fuel cell, which converts the hydrogen into electricity. This in turn drives an electric motor to propel the vehicle. In the case of passenger cars, this technology is well advanced, with several hundred hydrogen-powered automobiles already in operation on German roads. At the same time, the network of hydrogen stations in Germany is projected to grow from 100 to 400 over the next three years. Yet hydrogen is not currently an option for small vehicles such as electric scooters and motorcycles, since the pressure surge during refilling would be too great. Does this effectively shut out such vehicles from hydrogen technology? For further information see the IDTechEx report on Electric Two-wheelers 2021-2041.
Not at all! Researchers from the Fraunhofer Institute for Manufacturing Technology and Advanced Materials IFAM in Dresden have now come up with a hydrogen-based fuel that is ideal for small vehicles: POWERPASTE, which is based on solid magnesium hydride. "POWERPASTE stores hydrogen in a chemical form at room temperature and atmospheric pressure to be then released on demand," explains Dr. Marcus Vogt, research associate at Fraunhofer IFAM. And given that POWERPASTE only begins to decompose at temperatures of around 250 °C, it remains safe even when an e-scooter stands in the baking sun for hours. Moreover, refueling is extremely simple. Instead of heading to the filling station, riders merely have to replace an empty cartridge with a new one and then refill a tank with mains water. This can be done either at home or underway.
The starting material of POWERPASTE is magnesium, one of the most abundant elements and, therefore, an easily available raw material. Magnesium powder is combined with hydrogen to form magnesium hydride in a process conducted at 350 °C and five to six times atmospheric pressure. An ester and a metal salt are then added in order to form the finished product. Onboard the vehicle, the POWERPASTE is released from a cartridge by means of a plunger. When water is added from an onboard tank, the ensuing reaction generates hydrogen gas in a quantity dynamically adjusted to the actual requirements of the fuel cell. In fact, only half of the hydrogen originates from the POWERPASTE; the rest comes from the added water. "POWERPASTE thus has a huge energy storage density," says Vogt. "It is substantially higher than that of a 700 bar high-pressure tank. And compared to batteries, it has ten times the energy storage density." This means that POWERPASTE offers a range comparable to - or even greater than - gasoline. And it also provides a higher range than compressed hydrogen at a pressure of 700 bar.
With its huge energy storage density, POWERPASTE is also an interesting option for cars, delivery vehicles and range extenders in battery-powered electric vehicles. Similarly, it could also significantly extend the flight time of large drones, which would thereby be able to fly for several hours rather than a mere 20 minutes. This would be especially useful for survey work, such as the inspection of forestry or power lines. In another kind of application, campers might also use POWERPASTE in a fuel cell to generate electricity to power a coffeemaker or toaster.
In addition to providing a high operating range, POWERPASTE has another point in its favor. Unlike gaseous hydrogen, it does not require a costly infrastructure. This makes it ideal for areas lacking such an infrastructure. In places where there are no hydrogen stations, regular filling stations could therefore sell POWERPASTE in cartridges or canisters instead. The paste is fluid and pumpable. It can therefore be supplied by a standard filling line, using relatively inexpensive equipment. Initially, filling stations could supply smaller quantities of POWERPASTE - from a metal drum, for example - and then expand in line with demand. This would require capital expenditure of several tens of thousands of euros. By way of comparison, a filling station to pump hydrogen at high pressure currently costs between one and two million euros for each fuel pump. POWERPASTE is also cheap to transport, since no costly high-pressure tanks are involved nor the use of extremely cold liquid hydrogen.
Fraunhofer IFAM is currently building a production plant for POWERPASTE at the Fraunhofer Project Center for Energy Storage and Systems ZESS. Scheduled to go into operation in 2021, this new facility will be able to produce up to four tons of POWERPASTE a year - not only for e-scooters.
Source and top image: Fraunhofer-Gesellschaft

There are 3 comments for this article

I would like to have a publication about this product

If this has a high end capacity for stored energy (higher than lithium batteries?) , then is it a practical/viable method for standby , back up power ???

That could mean a totally new technical revolution in autoindustry, military use and of course... good bye to battery powered electrical vehicles including Tesla.