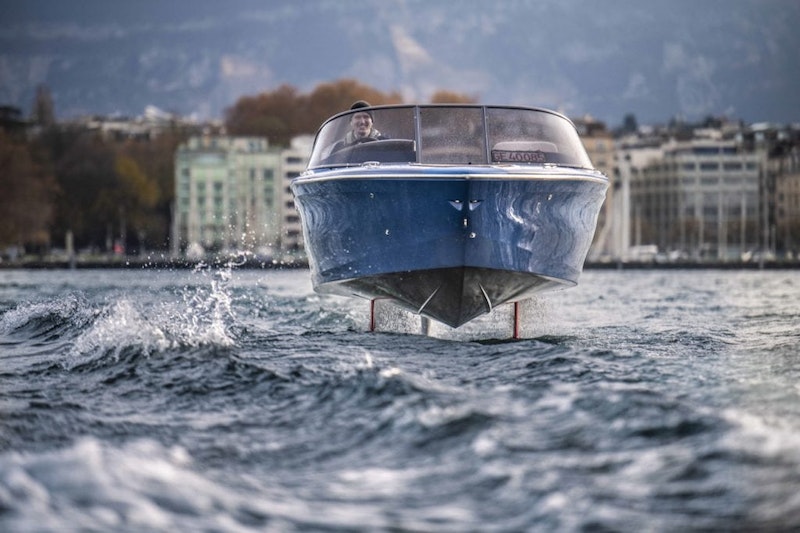 The first of a new breed of maritime transport successfully passed one of the world's most rigorous leisure boat tests, conducted by the Swiss authorities in Lucerne, last Tuesday.
Candela Seven is the world's first electric hydrofoil boat to enter the market, and as such, had to pass a set of trials to meet the Swiss safety, noise, and emission standards. Compared to the CE certification that all boats in the EU must conform to, the Swiss regulation is stricter. The Alp lakes double as reservoirs for drinking water and are rigorously protected. The threshold for noise is lower, as well as pollution and oil spills than in the rest of Europe. For further information see the IDTechEx report on Electric Leisure & Sea-going Boats and Ships 2021-2040.
To see if the novel craft would be deemed safe for use on the Swiss lakes, officials tried to provoke the foiling Seven by making sharp turns at full speed. To no avail - unlike other boats, the Seven has a brain: a flight computer that automatically adjusts the hydrofoils under the boat, keeping the craft artificially stable in winds and waves, even if provoked.
Candela Seven passed all tests with distinction. Needless to say, the emission test went well for the electric boat. But the one category where the Seven really outshone conventional boats, was the noise measurement. On the logarithmic decibel scale, an increase of 3 dB represents a doubling of sound intensity. To pass the test, a boat cannot be louder than 72 dB. Candela Seven flew silently past the sound recorder buoy, which picked up a mere 65 dB - about the sound intensity of a normal conversation.
"It's one of the most silent boats ever tested in Switzerland," said Christian Vogel, the Swiss dealer and responsible for the homologation. "The noise is actually a problem for a lot of imported boats. Often, we have to rebuild the engines with new, more advanced mufflers to pass the test," he added.
The homologation is the greenlight that the Swedish-made, electric hydrofoil boat needs to enter the Swiss market. The revolutionary craft is already the best-selling electric premium boat in Europe, thanks to its long all-electric range at high speeds. The hydrofoils lift the boat above the water, thus minimizing hull resistance and improving range by a factor of three compared to other electric boats.
"The Candela Seven is a true revolution for boating. For the first time, you can go both far and fast in an electric boat. Driving is fantastic, you're flying over the waves instead of slamming into them. And you can't really get seasick on board, " said Vogel.
Source and top image: Candela

Battery System for a Luxury Electric Boat
Autonomous Boats Could be Your Next Ride
General Dynamics Electric Boat Awarded $327.8 Million Navy Contract
Unmanned Robotic Vessels for the US Navy