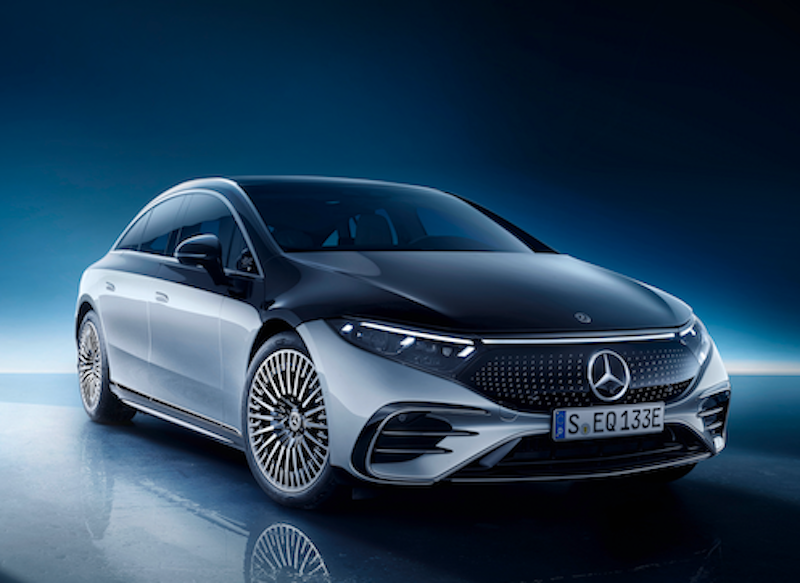 The EQS is the first all-electric luxury saloon from Mercedes-EQ. With it, Mercedes-EQ is redefining this vehicle segment. First models on the market will be the EQS 450+ and the EQS 580 4MATIC.
As part of its Ambition 2039 initiative, Mercedes-Benz is working on offering a carbon-neutral new car fleet within 20 years from now. By as early as 2030, the company wants more than half the cars it sells to feature electric drive systems - this includes fully electric vehicles and plug-in hybrids. In many areas, Mercedes is already thinking about tomorrow today: the new EQS is designed to be correspondingly sustainable. The vehicles are produced in a carbon-neutral manner, and resource-saving materials such as carpets made from recycled yarn are used. Mercedes-Benz AG has had its climate protection targets confirmed by the Science Based Targets Initiative (SBTI).
With ranges up to 770 kilometres and an output of up to 385 kW the powertrain of the EQS also meets the expectations of a progressive saloon in the S-Class segment. A performance version with up to 560 kW is being planned. All EQS models have an electric powertrain (eATS) at the rear axle, while the versions with 4MATIC also have an eATS at the front axle. For more information see the IDTechEx report on Electric Motors for Electric Vehicles: Land, Water, Air 2020-2030.
The EQS marks the launch of a new generation of batteries with significantly higher energy density. The larger of the two batteries has a usable energy content of 107.8 kWh. That is around 26 percent more than the EQC. The battery management software, developed in-house, allows updates over the air. In this way, the energy management system remains up to date throughout the life cycle. In terms of the cell chemistry, the cobalt content of the cathodes has been reduced to ten percent.
The EQS can be charged with up to 200 kW at fast charging stations with direct current. Power for up to another 300 kilometres (WLTP) is recharged in just 15 minutes. At home or at public charging stations, the EQS can be conveniently charged with up to 22 kW with AC using the on-board charger. In Japan, bidirectional charging with the EQS will also be possible, i.e. charging in both directions. In addition, there are various intelligent charging programs that can be activated automatically depending on the location, and functions such as particularly battery-saving charging.
Mercedes-Benz guarantees that energy from renewable energy sources is fed into the grid for charging current sourced via Mercedes me Charge. This so-called Green Charging has been an integral part of Mercedes me Charge since 2021. Other highlights include the densest network of charging points, with more than 500,000 of them in 31 countries, including over 200,000 in Europe. With IONITY Unlimited, all European Mercedes me Charge customers can use the fast charging network free of charge for one year.
Navigation with Electric Intelligence plans the fastest and most convenient route, including charging stops, based on numerous factors and reacts dynamically to traffic jams or a change in driving style, for example. A new feature of the EQS is a visualisation in the infotainment system showing whether the available battery capacity is sufficient to return to the starting point without charging. Charging stations along the route that have been added manually are given preference in the route calculation. Proposed charging stations can be excluded. The estimated charging costs per charging stop are calculated.
The EQS 580 not currently planned for the UK.
Source and top image: Mercedes-Benz