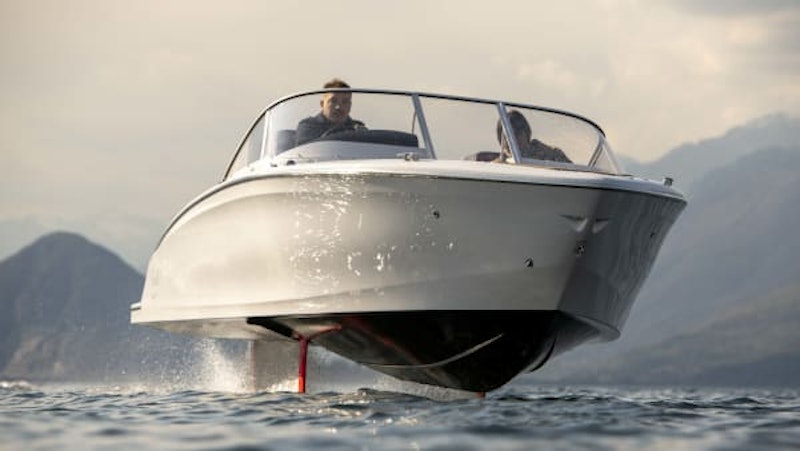 Yesterday marked a moment in history, as the first time a flying electric motorboat raced a flying sailing yacht. Both designs use hydrofoils that provide superior speed and energy efficiency over conventional boats. The race points to a future where most boats, sailing or motorized, will fly above the water.
Racing wingtip-to-wingtip, the Swedish-built electric motorboat Candela C-7 and Italian sailing monohull racer Persico 69F proved to be equally fast, both going about 30 knots in the light breeze on Lago di Garda, Italy. The race was the first occasion on which a foiling motorboat and foiling sailing boat flew together. Using foils - an innovation invented on the lake just over 100 years ago -, they soared over the water using considerably less energy than conventional vessels. For further information see the IDTechEx report on Electric Leisure & Sea-going Boats and Ships 2021-2040.
Hydrofoils are in essence underwater wings, that at certain speeds provide enough lift to allow the boat's hull to rise above the surface, reducing the water friction considerably.
For the Persico 69F, a sailing boat built for thrilling racing, its hydrofoils mean the craft can reach a top speed of 35 knots and sail at high speeds even in light wings - performance unattainable for conventional sailing vessels.
For Candela C-7, an electric motorboat already in serial production, the foils enable long range on pure battery power at speeds previously only possible in combustion engine boats. With a cruise speed of 22 and top speed of 30 knots, the Candela C-7 can fly for 2,5 hours before depleting its comparably modest 40 kWh battery. This is 2-3 times longer endurance than conventional, fast electric boats.
Skimming above Lake Garda, the two craft may look similar but their underlying tech differ. While the thrilling Persico 69F needs a skilled crew to control it during flight, the C-7 uses computers to make foiling accessible to ordinary boaters. C-7 has a new type of hyper-efficient hydrofoils that resemble aircraft wings. Using only 25 horsepower when cruising over Lake Garda, even fully loaded with 6 passengers, the Swedish craft is steered by a Flight controller, a computer that analyzes the boat's pitch and roll a hundred times a second and automatically adjusts the foils to keep it level above the waves.
Thanks to the computer and software, the ride is artificially stable, leaving even the most seasick-prone passengers with smiles on their faces. But the two flying craft also share many traits attributed to their foils: skimming across the lake, three feet above the water's surface, neither boat touched the wave crests. There was no slamming, no noise, and no wake from either boat - advantages that only foiling boats can offer.
These benefits have made hydrofoils a popular choice for budding electric boat builders, for which the main objective is to reduce energy consumption and gain range. So far, the Swedish Candela firm is the only company that has succeeded in bringing a vessel to the market. However, the C-7 has been met with success and is currently the best-selling electric motorboat in Europe, with 30 sold boats in just over a year.
This bodes well for a future where all-electric boats are increasingly common - and where flying boats is the norm, not the exception.
More info on Candela C-7
More info on Persico 69F
Candela's mission is to speed up the transition to fossil fuel-free lakes and oceans. Candela C-7 is the world's first electric hydrofoil boat in serial production. Combining long range, high speed and a silent drive train, C-7 is the first electric boat that can outperform fossil fuel powerboats.
Source: Candela