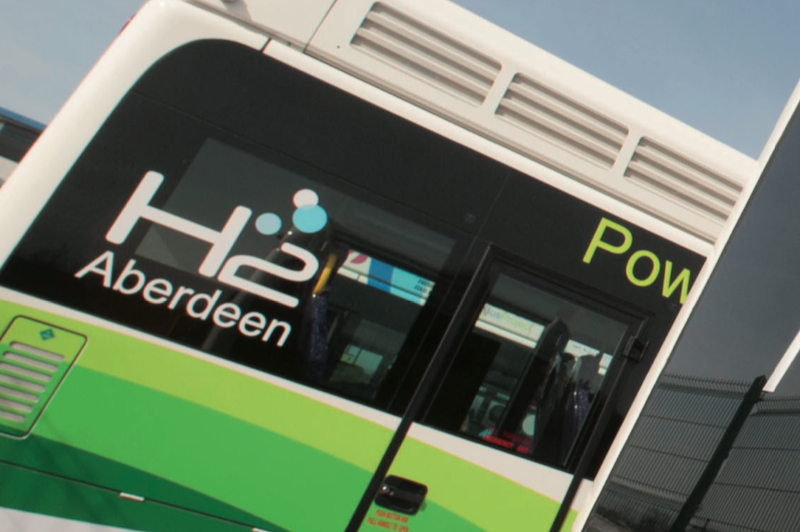 The search for Aberdeen City Council's new joint venture partner to build an exciting new hydrogen hub in the city, which will be Scotland's first commercially scalable, investable hydrogen production site, has launched today (23 June). The Aberdeen Hydrogen Hub, which is a hydrogen infrastructure development programme working across housing, heating and transport, is looking for a partner to supply its range of public sector vehicles.
The new partnership will build on the city's existing hydrogen infrastructure and transport projects, including a fleet of hydrogen-powered buses, public sector vehicles and waste trucks. For further information see the IDTechEx report on The Hydrogen Economy, Fuel Cells and Hydrogen Production Methods.
The Hydrogen Hub will capitalise on the region's central role in the development of the rapidly growing offshore wind sector to provide a truly 'green' fuel supply for transport, homes and businesses, and accelerate the growth of the hydrogen sector in the region. The search for the joint venture partner marks an important step in implementing Aberdeen's Net Zero Vision.
Aberdeen City Council Leader Councillor Jenny Laing said: "Aberdeen is already recognised as a pioneering hydrogen city and creating this strategic partnership will be crucial step in realising our ambitions for Aberdeen to become a global leader in hydrogen. Our city is renowned for its innovative thinking, entrepreneurial approach and energy expertise and developing the Aberdeen Hydrogen Hub is an important next step in our plan to create long-term, green economic growth in the city and deliver Aberdeen's Net Zero Vision. Over the past five years, Aberdeen has established itself as a centre of excellence for hydrogen and fuel cell technologies. Taking the energy expertise, experience and infrastructure already in place in Aberdeen, the city has successfully implemented large scale hydrogen projects laying the foundations for more to follow. At the City Region level, there is an opportunity to expand into large scale upstream production and supply for both domestic and export markets through the Aberdeen Hydrogen Hub concept. The Hub will capitalise on Aberdeen's leading role as a pioneering hydrogen city and create a springboard for economic growth, future investment, technology development and job creation across the region."
Today's announcement builds on a market engagement exercise conducted earlier this year, where respondents expressed significant interest in investing in a commercial scale hydrogen production facility, which demonstrates the appetite for this type of project is there.
The Aberdeen Hydrogen Hub, and its subsequent phases, have the potential to provide a significant contribution to UK Government and Scottish Government Climate Change targets. It aligns with the UK Government's announcement of a Hydrogen Transport Programme, the Scottish Government's Programme for Government and in particular, the Scottish Government's Hydrogen Policy Statement, which sets Scotland to become a leading hydrogen nation, with an ambition to generate 5GW of renewable and low-carbon hydrogen by 2030.
SOURCES:
Aberdeen region's Hydrogen strategy can be found here: Aberdeen Region Hydrogen Strategy and Action Plan 2015 - 2025
The Scottish Government's Hydrogen policy statement can be read here: Hydrogen Policy Statement
The invitation to tender (ITT) document can be found here: https://www.publiccontractsscotland.gov.uk/search/show/search_view.aspx?ID=JUN418941
Source: Aspect Communication
Top image: Aberdeen City Region Hydrogen Strategy & Action Plan