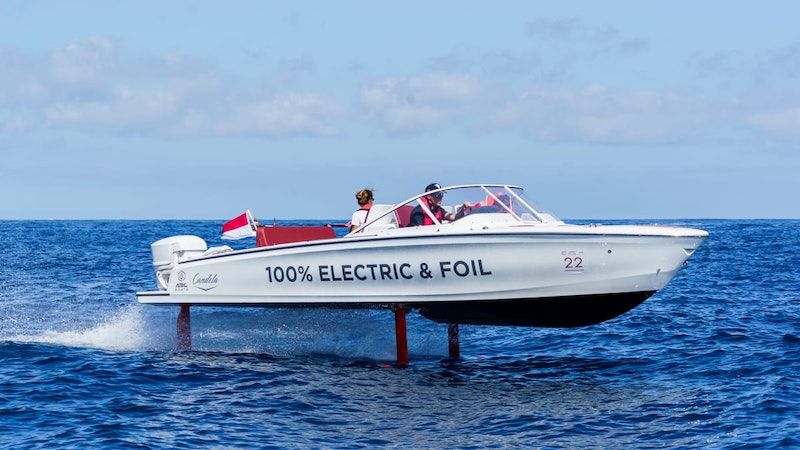 The flying Candela C-7 wins world's most prestigious electric speedboat race in Monaco by beating conventional electric boats that pack ten times more power, the ultra-efficient C-7 shows why future boats will be foiling.
Candela C-7 is the first hydrofoiling electric boat in serial production. It is also the best-selling electric premium boat in Europe and has since its introduction in 2019 won several awards for the innovative technology that allows it to fly above the surface, using 80% less energy than conventional boats. For further information see the IDTechEx report on Electric Leisure & Sea-going Boats and Ships 2021-2040.
Competing in Friday's YCM International Speed Record race during the Monaco Energy Challenge, the world's biggest competition for electric and new energy boats hosted by the Monaco Yacht Club, the Swedish-made C-7 beat 14 other electric boats in the 1/8 nautical mile sprint race. Averaging 27, 055 knots, the Candela C-7 flew past the finishing line at a speed exceeding 31 knots, despite rough weather and big waves.
Even more impressive, the ultra-efficient C-7 beat conventional hulled electric powerboats equipped with ten times bigger motors - showing why hydrofoiling is the future for powerboats.
The 25-foot Candela C-7 needs only 25 hp to cruise at a speed of 20 knots. Maxing out at 87 hp during take-off, its electric motor is tiny compared to the engines fitted to conventional, planing powerboats of the same size. Due to high hydrodynamic drag, planing craft usually need several hundred horsepowers to reach high speeds.
"This is a big day for electric boating. We wanted to show that instead of just fitting bigger motors and more batteries into conventional, inefficient hulls, hydrofoils allow you to use less power to reach higher speeds and get long range. That's how we can make boating truly sustainable," said Candela's Mikael Mahlberg after the race. "By flying above the water, you also get a smoother ride in choppy weather," Mahlberg added.
"The C-7 has more in common with an aircraft than a boat. The control system resembles that of a modern jet fighter, like the F-16. As a driver, you just steer and control the speed, everything else is handled by the computer," said Mahlberg.
The C-7 is equipped with Candela's sophisticated on-board computer, the Flight controller, which automatically adjusts the hydrofoil 100 times per second to account for side wind, waves and different loads. Receiving input from several different sensors, the Flight controller computes the foil's optimum angle of attack to ensure a smooth ride.
Candela's hydrofoil system - with two underwater wings that can be retracted for easy storage when trailing the boat or entering shallow ports - is now being leveraged for bigger electric boats. Next year, Candela will launch the P-30 electric foiling ferry for the city of Stockholm, as well as a 12-person water taxi, called the Candela P-12.
Candela's mission is to speed up the transition to fossil fuel-free lakes and oceans. Candela C-7 is the world's first electric hydrofoil boat in serial production. Combining long range, high speed and a silent drive train, C-7 is the first electric boat that can outperform fossil fuel powerboats.
Source: Candela