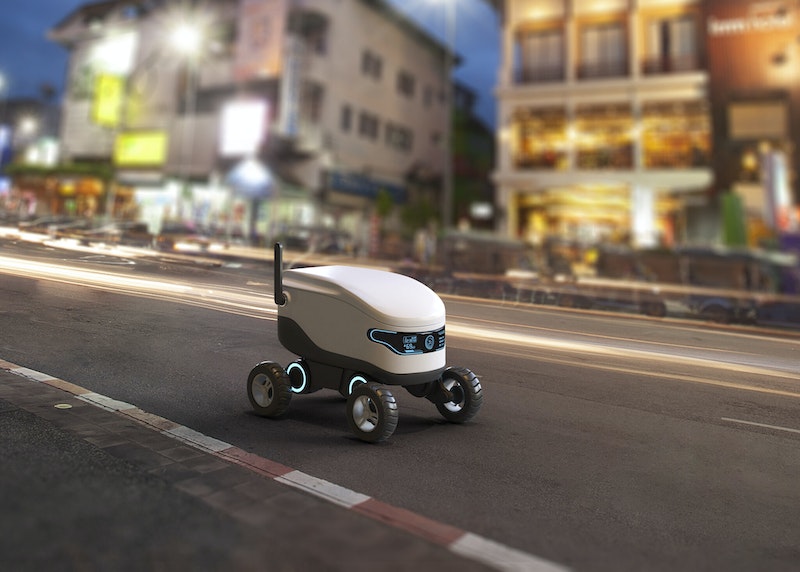 Whether a robot or a person delivers your package, the carbon footprint would essentially be the same, according to a University of Michigan study that could help inform the future of automated delivery as the pandemic fuels a dramatic rise in online shopping.
The researchers examined the environmental impacts of advanced residential package delivery scenarios that use electric and gas-powered autonomous vehicles and two-legged robots to ferry goods from delivery hubs to neighborhoods, and then to front doors. They compared those impacts with the traditional approach of a human driver who hand-delivers parcels.
They found that while robots and automation contribute less than 20% of a package's footprint, most of the greenhouse gas emissions come from the vehicle. Vehicle powertrain and fuel economy are the key factors determining the package's footprint. Switching to electric vehicles and reducing the carbon intensity of the electricity they run on could have the biggest impacts in sustainable parcel delivery, the researchers say. Their study is a life cycle analysis of the cradle-to-grave greenhouse gas emissions for 12 suburban delivery scenarios. It's unique in that it doesn't just tally emissions from the delivery process. It also counts greenhouse gases from manufacturing the vehicles and robots, as well as disposing of them or recycling them at the end of their lives. For further information see the IDTechEx report on Mobile Robots, Autonomous Vehicles, and Drones in Logistics, Warehousing, and Delivery 2020-2040.
"We found that the energy and carbon footprints of this automated parcel delivery in suburban areas was similar to that of conventional human driven vehicles. The advantages of better fuel economy through vehicle automation were offset by greater electricity loads from automated vehicle power requirements," said Gregory Keoleian, the Peter M. Wege Endowed Professor of Sustainable Systems at the U-M School for Environment and Sustainability and a professor of civil and environmental engineering. "For all delivery systems studied, the vehicle-use phase is the single largest contributor to greenhouse gas emissions, highlighting the need for low-carbon fuels for sustainable parcel delivery. It is critically important to decarbonize grids while deploying electrified vehicles."

Optimizing 'the last mile' in a surging package delivery market

E-commerce and COVID-19-related demand for contactless delivery has stoked industry interest in robots and autonomous vehicles to make the process more efficient. UPS and Waymo are testing an autonomous delivery van in Arizona, for example. Ford Motor Co. and Agility Robotics are exploring a system that would use a two-legged walking robot to cart packages from the delivery van to the doorstep. And Amazon and FedEx are among those testing drones and autonomous delivery robots.
The "last mile" refers to the final leg of a product's journey from a local distribution center to the customer. It's also the most expensive, most carbon-intensive and least energy-efficient link in the supply chain. Automated last-mile approaches have the potential to reduce delivery costs between 10% and 40% in cities, studies have shown. But their environmental impacts should be explored before automated approaches are widely adopted, researchers say.

The team evaluated emissions from three delivery scenarios and four vehicle platforms. Delivery scenarios include:
For each scenario, they analyzed internal combustion engine and battery electric powertrains on two sizes of delivery vehicle一a roughly 120-cubic-foot van about the size of a Nissan cargo van and 350-cubic-foot model based on the Ford Transit full-size cargo van. They found that the smallest carbon footprint一167 grams of CO2 per package一came from conventional delivery with the smaller, electric van. And the largest一at 486 grams per package一came from the partially automated scenario that relied on the larger, gas-powered van and a two-legged robot.
"Results suggest that automated delivery systems could have slightly greater life cycle greenhouse gas emissions than conventional delivery systems for smaller-sized vans, but there is potential opportunity to reduce emissions for larger-sized vans," Keoleian said. "Compared to the conventional scenario, full automation results in similar greenhouse gas emissions for the large gasoline powered cargo van, but 10% higher for the smaller battery electric van."
Keoleian added that no single automated delivery system will suit all situations, and in addition to environmental performance, other factors will need to be considered, such as life cycle costs, safety, visual impact and social sustainability factors such as employment impacts.
Source and top image: University of Michigan