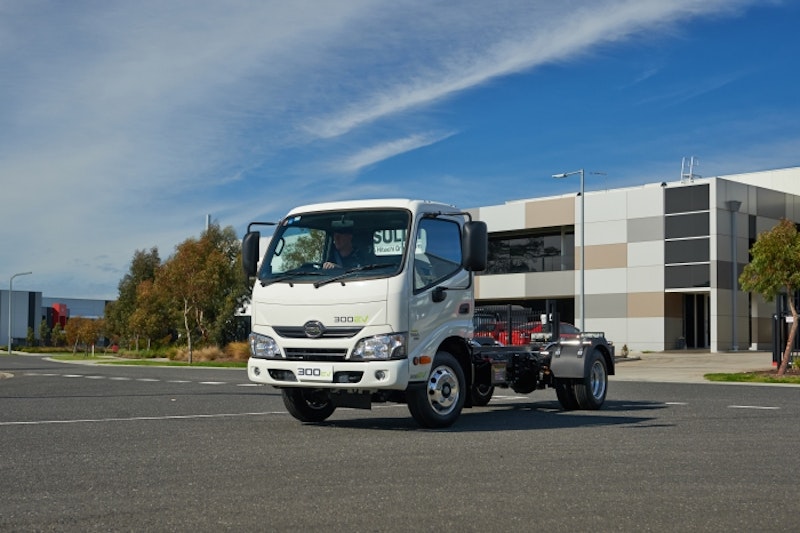 The first example of the game-changing pure electric-powered SEA 300-45 has rolled off SEA Electric's Melbourne production line, with its car licence driver rating opening up a world of opportunity for zero emission last-mile deliveries.
Designed, engineered and assembled in Australia, the 4.5-tonne GVM SEA 300-45 was unveiled in Brisbane. The model's intelligent design sees batteries and its Power-System optimally positioned away from the steer axle, allowing for improved weight distribution and outstanding driving dynamics.
The patented SEA-Drive® 70-7 Power-System as fitted to the truck features maximum power and torque ratings of 127kW and 700Nm, with its performance characteristics making it ideal for stop-start city traffic. Packaged with an 88kWh battery, the SEA 300-45 has an unladen range of up to 250km with a fast charging time of under two hours.
Notably, the truck's tare weight comes in at only 2.5-tonnes, which results in an allowance of 2-tonnes for its body and freight, an attractive proposition in the EV space. For further information see the IDTechEx report on Electric Truck Markets 2021-2041.
The design of the SEA 300-45 allows for a maximum body length of 4,820mm, while all ancillary functions can be converted to pure-electric power, including refrigeration units.
"In recent times, the transport industry has seen massive development in the last mile delivery sector, fuelled by the growth of demand for online shopping," said Bill Gillespie, SEA Electric President - Asia Pacific. "We're particularly proud of the SEA 300-45; it ticks many boxes for fleets who want to show leadership in environmental sustainability moving forward. Obviously, being capable of driven on a car licence makes it is easier to attract and retain staff, and those drivers are to able to utilise a noise, fume and vibration-free work environment. With the silent operation of the truck, converting to EVs creates opportunities to beat noise curfews moving forward, with residences and businesses along delivery routes also big winners. The range of the SEA 300-45 is also a strong suite, and when coupled with its fast charging capability, the trucks can slot in seamlessly to existing fleets. It's exciting that our assembly line now produces the world's first true range of all-electric trucks, continuing the drive to an all-electric future."
The first SEA 300-45 is yet another milestone for SEA Electric since the local volume production of trucks commenced, with the brand recently becoming Australia's latest OEM after gaining Australian Design Rules approval.
The SEA Electric range is available from the SEA national dealer network, complete with a comprehensive sales, service and parts offering, backed up by NTI's market leading 24/7 roadside assistance package for the warranty period of the trucks.
Further details on SEA Electric and its dealer network can be found at www.sea-electric.com/en_au.
About SEA Electric
SEA Electric is an Australian company with a global reach specialising in the assembly and 100% electrification of commercial vehicles worldwide. Dealing directly with vehicle users and working alongside automotive OEM's, SEA Electric supplies and licences patented technology. SEA Electric was founded in 2013. After four years of product development and testing, SEA Electric launched its commercial operations in early 2017, triggered by the reduction in battery kWh pricing, allowing for commercial feasibility in offering electric drivetrains to the global market.
For further media information, please contact:
Mark Walker
Media & Communication Services
mark@mediacomservices.com.au
Source and top image: SEA Electric