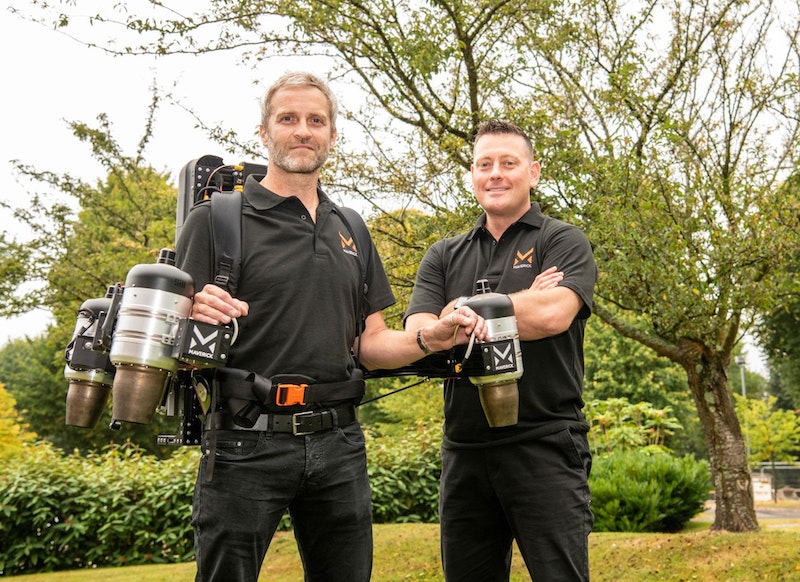 The world's first hands-free jetpack created by two British entrepreneurs has been revealed for the first time. These are the first images ever released of Maverick Aviation's prototype, which promises to transform the way challenging maintenance, inspections and rescues are carried out worldwide.
The jetpack is the brainchild of Hollywood animatronics expert Matt Denton and Royal Navy Commander Antony Quinn. It uses a unique Vertical Take-off and Landing (VTOL) system and is designed to be operated hands-free, allowing people to make safer flights, and precision landings on structures that are difficult to access — from wind turbines to military hardware, buildings and construction projects. The Maverick Jetpack can be reconfigured as a heavy-lift drone capable of being operated remotely and carrying ten times the payload of current similarly sized systems on the market — easily enough to lift a casualty like a stricken climber to safety. For further information see the IDTechEx report on Air Taxis: Electric Vertical Take-Off and Landing Aircraft 2021-2041.
Other use cases include search & rescue, leisure, disaster relief, security and policing. The company, based at the Fareham Innovation Centre at Solent Airport, near Southampton, estimates the potential market for security, defence and rescue uses alone is worth in excess of £700m.
Helicopters are currently used to carry out much of this work, but Maverick's Jetpack is far smaller, uses sustainable fuel, and can slash costs. It threatens to take market share in the global lift market, which Maverick says is worth approximately £52bn a year. The jetpack is unusually light because Maverick exploited advanced manufacturing techniques like 3D printing and materials including aluminium, titanium and carbon fibre. It will travel at between 10mph and 30mph depending on the task.
The control system is extremely intuitive and the operator can switch on an in-built autopilot so they can multi-task while in flight if necessary. Early work on the control system software was funded by a £97,000 grant from Innovate UK, secured by Maverick's grant partner Catax. This money also helped pay for patent applications and the creation of a concept demonstrator. The team has since received much more funding, including grants and business mentorship from the University of Southampton Science Park.
The first manned test flight is scheduled for next summer and the company is about to start seeking further investment to take the jetpack to market.
Co-founder Matt Denton is also Maverick's CTO. He's well regarded for his work on animatronics and control systems, having worked on numerous Star Wars movies that saw him develop the BB-8 droid from 2015's Star Wars: The Force Awakens. He also worked on Jurassic World and Harry Potter movies, The Prisoner of Azkaban and The Goblet of Fire.
Antony Quinn, CEO and co-founder of Maverick Aviation, commented: "The jetpack uses the same sort of jet engines that you see on a passenger plane, only ours are the size of a rugby ball. What is unique about what we're doing is the computer-controlled autopilot system that makes flying effortless and easy to control with precision. That's how we have changed jetpacks from exciting to useful. It's so intuitive to fly that the cost of training is going to be low, so you're going to have all sorts of professionals suddenly able to work in the most inaccessible environments safely and quickly. I realised that the growing onshore and offshore wind industry really needed a solution like this. Their engineers climb up ladders inside these structures for hours each day and, in an emergency situation, it's almost impossible to get down quickly. Drones can be useful for inspections, but in many circumstances you need to get an engineer up there. During tours of Afghanistan and Iraq, the number of possible use cases just kept on mounting and I realised how big the opportunity was. The potential is almost endless. Before, people would have used a £30m helicopter to perform some simple tasks, we can offer a more tailored solution at a fraction of the cost."
Karen Taylor, Group Head of Grants at Catax, said: "What Antony and Matt are doing is the stuff of dreams. When we think of jetpacks, plenty of Hollywood scripts come to mind but this is the first time such a versatile piece of equipment is being created with business use cases at the forefront. They've achieved an incredible amount so far, and it's fantastic that a British company is leading the way on such an important, game-changing piece of technology."
Source and top image: Rhizome Media Group