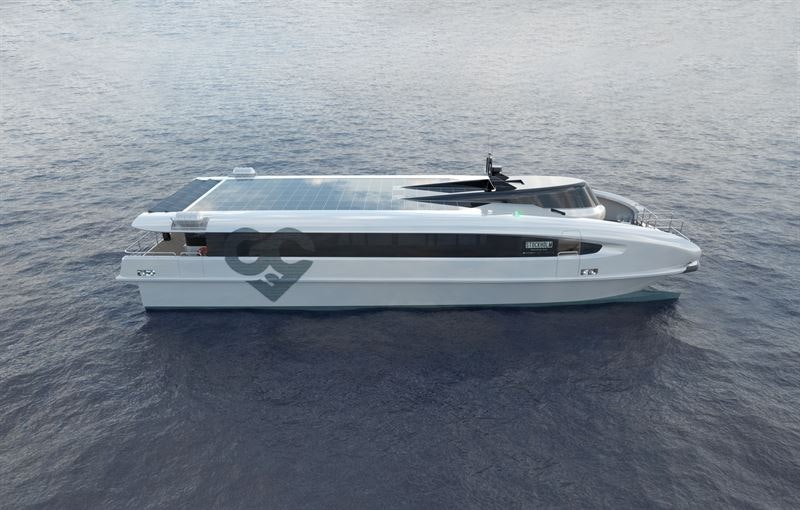 Stockholm-based Echandia has signed an agreement to supply the world's first emission-free high-speed catamaran with an integrated battery and hydrogen-based fuel cell system. The client is Green City Ferries AB and the ferry is planned for commercial traffic in Stockholm. The installation will take place in the autumn of 2022 and the agreement is worth approximately SEK 14 million for Echandia.
Echandia is a world-leading developer of advanced battery and fuel cell systems for maritime electrification. The agreement is for the Beluga24 model, which is designed by Teknicraft in New Zealand and the Italian Studio Sculli and is built in carbon fiber by Green City Ferries north of Stockholm. The high energy efficiency of Echandia's integrated battery and fuel cell systems requires less hydrogen, which saves a lot of weight, and the battery part is significantly lighter than competing solutions. For further information see the IDTechEx report on Electric Leisure & Sea-going Boats and Ships 2021-2040.
If you look at public transport in Stockholm, the fleet of vessels accounts for circa 5 percent of energy consumption but about 50 percent of carbon dioxide emissions annually (according to Båtplan Stockholm 2025). Green City Ferries' goal is to switch to emission-free and fast waterborne transport in the world's cities. The start for this takes place in Stockholm with support from Klimatklivet and EU. Before initializing final production stages, Green City Ferries will secure additional external financing.
Magnus Eriksson, CEO, Echandia, comments "Sweden has been lagging behind internationally when it comes to electrifying shipping, but now the pace is increasing here as well. We are proud to be a part of this project that not only contributes to reducing emissions from Stockholm's waterborne local transport but is also the first in the world with an emission-free high-speed catamaran. The ferry will be equipped with an integrated system with both batteries and hydrogen, which is significantly more energy efficient compared to solutions with separate systems."
Fredrik Thornell, CEO, Green City Ferries, comments: "We are very pleased to collaborate with Echandia in this groundbreaking project, which we see great interest in globally. We will build a completely emission-free high-speed catamaran intended to operate in Stockholm's waters. Echandia is the perfect partner for that. Compared to other tenders, Echandia's solution means significantly lower total weight with high safety."
Source and top image: Echandia