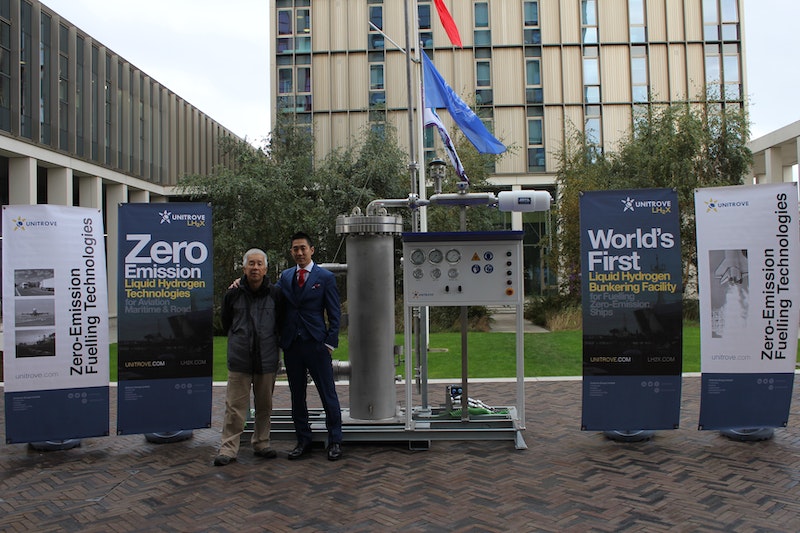 Clean energy solutions provider Unitrove has unveiled the world's first liquid hydrogen bunkering facility for fuelling zero-emission ships at the COP26 climate change conference in Glasgow. The unveiling, at the City of Glasgow College's Riverside Campus, is the culmination of months of work.
Unitrove says the facility is vital to fuel and international shipping industry that accounts for around one billion tonnes of global carbon dioxide (CO₂) emissions and contributes to around 400,000 premature deaths and 14 million cases of childhood asthma every year due to fine particulate matter (PM2.5), sulphur oxides (SOₓ), and nitrogen oxides (NOₓ) that arise from ship smokestacks*.
Having already successfully delivered the UK's first liquefied natural gas bunkering facility at Teesport in May 2015, Steven Lua, CEO of Leicestershire-based Unitrove, said his ambition was to enable clean, affordable, reliable, and sustainable fuelling options for ships at every port in the world - and he believes liquid hydrogen will play a vital role, especially for larger sea vessels. For further information see the IDTechEx report on The Hydrogen Economy, Fuel Cells and Hydrogen Production Methods.
In the run-up to COP26, The International Chamber of Shipping (ICS) submitted plans to the industry's UN regulator, the International Maritime Organization (IMO), calling for urgent measures to help the industry achieve net zero CO2 emissions by 2050. The ICS, which represents 80% of the global shipping industry, is pushing governments to double the IMO's current target, which is to reduce emissions from international shipping by 50% by 2050.
"The global maritime sector is one of the most polluting in the world. It's estimated that just a handful of the worst-polluting mega ships on our oceans today produce more pollution than all the world's cars put together," said Mr Lua. "That's a staggering statistic, and one we simply cannot ignore. To achieve net zero by 2050 needs the combined will of the industry and governments. As well as building new vessels, we need to ensure the infrastructure is in place. At this moment in time, there's no clean-fuel bunkering infrastructure - it's practically non-existent. Without zero-emission fueling infrastructure, the drive for zero-emission ships will falter. In terms of infrastructure, there's nothing significant in place today, but we are here to change that. The average lifespan of a large ship is anywhere between 20 to 40 years, meaning any ship procured today could potentially still be operating well beyond 2050."
Mr Lua said liquid hydrogen as a commercial fuel was relatively unexplored as an option - but that it had great potential for many uses, including plugging the gap where electric and compressed hydrogen cannot reach.
"Liquid hydrogen has long been used to safely and successfully send rockets into space. The technology is mature, but the markets for its use are not. We already see very early signs of light-duty vessels being battery-driven or powered by compressed gaseous hydrogen, but liquid hydrogen will allow us to serve the heavier portion of the shipping fleet where we hope to have a much larger impact. We are also exploring options including ammonia, liquid organic hydrogen carriers, and solid hydrogen in the form of sodium borohydride. However, we understand that priority is currently being given to the development of international standards and regulations for pure hydrogen, and this could play a significant factor in the long run. We believe that hydrogen will be recognised as a global commodity that will be traded in the same way that natural gas is today. The bunker fuel market is worth an estimated $120bn, so there is a huge opportunity not only in environmental and social terms, but also financially."
Today's showcase is taking place at the International Maritime Hub, which is being hosted by the City of Glasgow College and Maritime UK. Maritime UK is the industry body for the £46bn UK maritime sector, representing ports, shipping, technology, engineering and marine leisure.
Ben Murray, chief executive at Maritime UK, said: "Unitrove's pioneering energy solutions deserve their place on the world stage at COP26, joining Maritime UK to set the agenda for green maritime. We are bringing the sector together to showcase best practice and accelerate progress towards net zero across the global industry. We have always been an island of maritime pioneers, and through closer collaboration, and further co-investment with government, we can rule the green waves of the future and meet the UK's net zero target together."
Tim Munn, Director at marine2o and co-chair of the National Maritime SME Working Group, added: "In the run up to COP26 we have launched the National Maritime UK Marine Hydrogen Working Group, in perfect harmony with the launch of the world's first liquid hydrigen marine bunkering facility by Unitrove. Hydrogen is destined to be the clean future fuel of shipping. Companies like Unitrove that jump in early will help to shape the future of this sector that is working rapidly towards zero emissions."
Jane Hunt, MP for Loughborough, said: "I am incredibly proud of Shepshed-based Unitrove who are displaying their revolutionary world-first project at COP26 in Glasgow. Loughborough is leading the way in hydrogen fuel technology; we are already home to Intelligent Energy who are world leaders in hydrogen fuel cell development. It's technology such as this that will help us to achieve our goal of reaching net zero by 2050. UK-based innovation and manufacturing, such as this latest product from Unitrove, is playing a huge part in helping to address the global climate challenge."
Source and top image: Nathan Rous PR