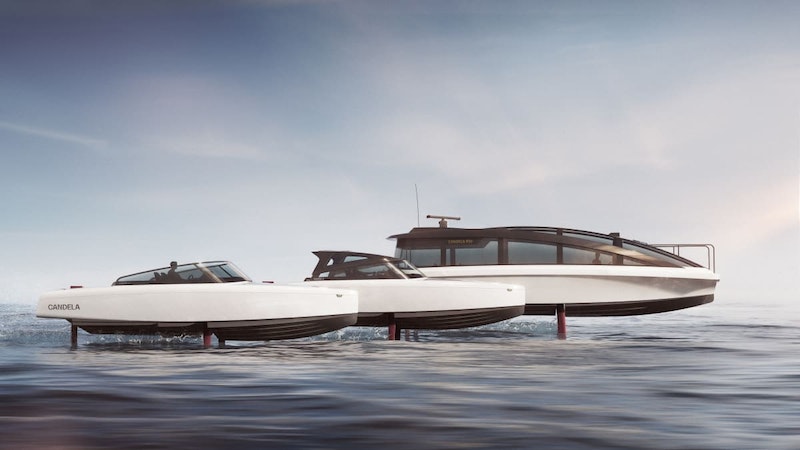 Swedish tech firm Candela has announced it's raised €24M, led by EQT Ventures, with participation from existing investor Chris Anderson, the Curator of TED. The new capital will boost the company's already substantial cash influx from sales and will be used to triple R&D, invest in production automation and scale up the sales organisation to meet demand for Candela's electric leisure and commercial vessels worldwide.
The shift to zero emission boats and ships has been hampered by the enormous energy consumption and correspondingly low range of conventional electric boats. Flying on computer-guided underwater wings -- known as hydrofoils -- that reduce energy consumption by 80% compared to conventional planing craft, Candela's vessels soar above the waves in silence with 2-3 times longer endurance than the best conventional electric powerboats. The active hydrofoil system stabilises the vessels in-flight using computer power and advanced software that accounts for waves and side winds, allowing for a wake-free and smoother ride than conventional boats.
Over the past three years, Candela's high-tech hydrofoil vessels have disrupted the global boating industry by being the first to offer the elusive combination of long all-electric range and high speed. Since 2019, Candela has led electric boat sales in Europe with its foiling C-7 sportsboat. Now, the company is building on this success with the mass market Candela C-8, a day cruiser that the company has close to 100 orders for, just three months after launch. For further information see the IDTechEx report on Electric Leisure & Sea-going Boats and Ships 2021-2040.
The new investment will be used to triple Candela's fast-growing R&D team that consists of leading engineers from the aerospace, software, and electronics industries. Funds will also be allocated to complement the company's Stockholm facility with an additional highly automated factory, which will produce the Candela C-8 alongside the commercial vessels launched earlier this year: the shuttle ferry Candela P-30 and the water taxi Candela P-12.
By scaling its mature and market-proven hydrofoil tech to commercial vessels, Candela envisions to have a big impact on the sizable CO2 emissions caused by fast coastal shipping worldwide. Marine transports are responsible for 4 to 5 percent of the world's annual Co2 emissions. By combining sustainability with lower operational costs, Candela foresees that the company's electric passenger vessels will drive the transition away from ICE ships even faster than for leisure boats.
The Candela P-30 ferry - the world's first electric hydrofoil passenger vessel - has been commissioned by the Region of Stockholm, where it is set to commence traffic in 2023. It will shuttle passengers to and from the city's vast archipelago. According to the Region's calculations, Candela P-30's energy-saving hydrofoil system will shed operational costs by 42% compared to current diesel vessels, as well as allow for faster travel and more frequent departures.
Gustav Hasselskog, CEO of Candela, commented: "We've shown that our hydrofoil tech is the key to make electric boats commercially viable. We're seeing boundless demand for the Candela C-8, as well as huge interest in our commercial vessels. The investment from EQT Ventures will allow us to double down on our mission to speed up the transition to fossil fuel-free lakes and oceans. It took us four years to develop the technology and two more years to master it. Now we are ready to scale up fast. It then means a lot to get strong backing from Europe's finest investors. EQT Ventures is really the perfect match for Candela with its connections to the Wallenberg sphere with its 160 years of success in developing world leading industrial companies. Our recreational craft are in high demand since they offer an electric alternative that is much better than the ICE competitors. For commercial operators, Candela's 90% lower energy cost is an additional important driver for switching to electric."
Lars Jörnow, Partner at EQT Ventures, added: "Candela is the world's leading company for cutting-edge technology that makes leisure and passenger crafts fossil-free. The transition to clean passenger transportation has been very fast on land. Now, with Candela's technology, it will happen also on water. We want to support Candela to further strengthen its role as the technology leader while scaling up the production fast, so that the positive environmental impact of Candela can become global."
About Candela
Candela Technology's mission is to speed up the transition to fossil fuel-free lakes and oceans. Based in Stockholm, Sweden, Candela develops and builds the world's first electric hydrofoil watercraft. Our proprietary electric hydrofoil technology reduces energy consumption by 80% compared to conventional boats and allows for the first electric vessels with long range at high speeds.
For further information please visit www.candela.com

Press contact: mikael.mahlberg@candela.com
About EQT Ventures
EQT Ventures is a multi-stage VC fund that partners with the most ambitious and boldest founders in Europe and the US. The fund is based in Luxembourg and has investment advisors stationed in Stockholm, Amsterdam, London, San Francisco, Berlin and Paris. Fuelled by some of Europe's most experienced company builders and scalers, EQT Ventures helps the next generation of entrepreneurs with the capital and hands-on support needed to build global winners.
For further information please visit https://eqtventures.com/
Source and top image: Cancela