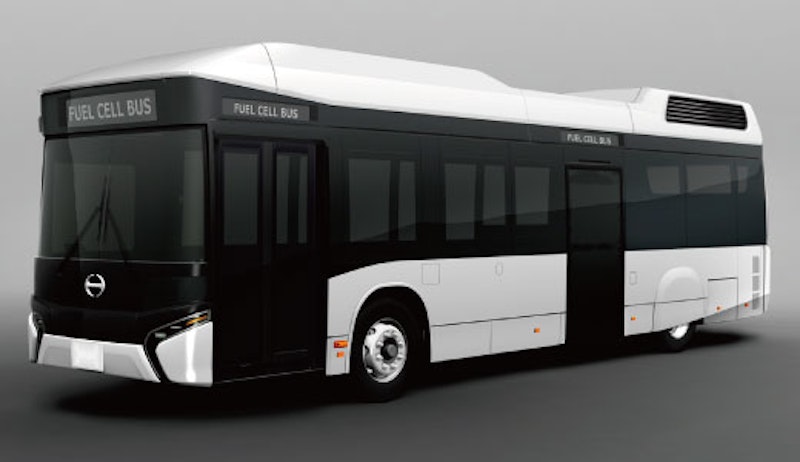 Isuzu Motors Limited, Hino Motors Ltd, and Toyota Motor Corporation plan to strengthen their efforts to electrify buses toward the achievement of carbon neutrality by 2050. In collaboration with Commercial Japan Partnership Technologies Co Ltd which works to solve social issues through the spread of CASE technologies, they will expand their lineup to increase customer options and reduce vehicle cost, in addition to popularizing practical and sustainable electric vehicles. For further information see the IDTechEx report on Fuel Cell Electric Vehicles 2022-2042.

Toward the realization of a decarbonized society in 2050, Isuzu and Hino plan to begin production of battery electric vehicle (BEV) flat-floor route buses in 2024 at Isuzu-Hino joint venture J-Bus Ltd. Isuzu and Hino have been collaborating in the bus business since 2002 and have been precisely responding to the requirements of bus operators in Japan. Recent rapid moves toward carbon neutrality are heightening the need for zero-emission route buses, and Isuzu and Hino intend to respond to that need.
The BEV flat-floor route bus planned for production start in FY2024 will be developed by Isuzu, and the adoption of a BEV powertrain, which will provide zero CO2 emissions during vehicle use, is aimed at contributing to the realization of a decarbonized society. Also, toward achieving zero onboard accidents, by taking advantage of the freedom of layout afforded by BEVs, the flat-floor area of the bus's interior can be greatly expanded compared to conventional non-step buses, significantly improving travel safety.

Isuzu, Hino, and Toyota to begin study for the planning and development of next-generation FCEV route bus

Additionally, Isuzu, Hino, and Toyota have agreed to begin studying the planning and development of next-generation fuel cell electric vehicle (FCEV) route bus based on the BEV flat-floor route bus to be produced from FY2024.
The next-generation FCEV route bus will combine the platform of the BEV flat-floor route bus scheduled for launch in FY 2024, with Toyota's fully developed fuel cell system found in the Toyota Mirai and the SORA fuel cell bus. By sharing the same components between BEVs and FCEVs, Isuzu, Hino, and Toyota aim to significantly reduce costs, and by adopting new-generation fuel cell stacks and utilizing Toyota and Hino's FCEV bus development know-how to date, they aim to provide longer-life, higher-added-value electrified vehicles. Through this initiative, Isuzu, Hino, and Toyota intend to contribute to the realization of a hydrogen-based society in Japan, by applying Japan's strengths in fuel cell technology.
Isuzu is advancing its global environmental actions based on the "Isuzu Environmental Vision 2050" (announced in 2020), an Isuzu Group roadmap for addressing global environmental issues over the long term and securing a prosperous and sustainable society by the year 2050. Meanwhile, Hino, through its "Hino Environmental Challenge 2050" (announced in 2017), has set a goal of achieving zero environmental impact and is accelerating its efforts by additionally establishing the "Hino Environmental Milestone 2030" as an interim target in April 2021. Toyota has also formulated its "Toyota Environmental Challenge 2050" (announced in 2015), which aims to significantly reduce CO2 emissions during vehicle use and is endeavoring to develop and promote the use of electrified vehicle technologies.
Source: Toyota
Top image: Hino