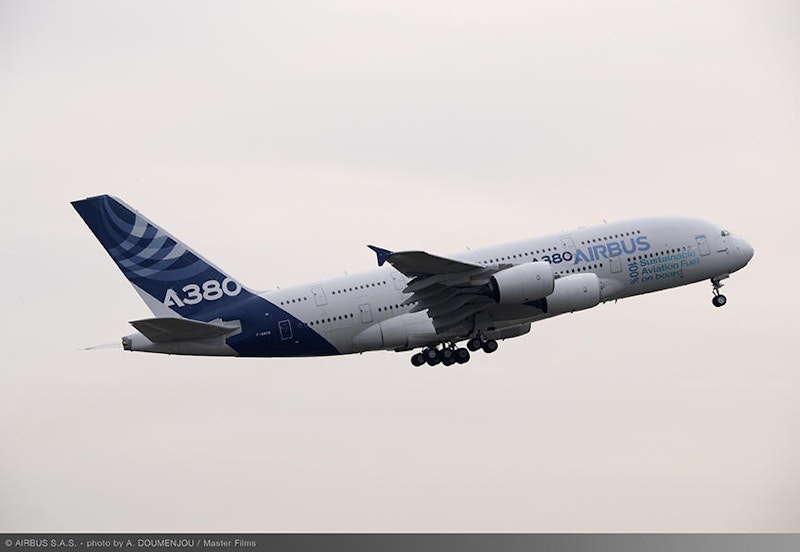 Airbus has performed a first A380 flight powered by 100% Sustainable Aviation Fuel (SAF). Airbus' A380 test aircraft MSN 1 took off from Blagnac Airport, Toulouse, France and the flight lasted about three hours, operating one Rolls-Royce Trent 900 engine on 100% SAF.
27 tonnes of unblended SAF were provided by TotalEnergies for this flight. The SAF produced in Normandy, close to Le Havre, France, was made from Hydroprocessed Esters and Fatty Acids (HEFA), free of aromatics and sulphur, and primarily consisting of used cooking oil, as well as other waste fats. A second flight, with the same aircraft, is scheduled to take place from Toulouse to Nice Airport, on the 29 March to test the use of SAF during take-off and landing. For further information see the IDTechEx report on Sustainable Alternative Fuels 2021-2031.
This is the third Airbus aircraft type to fly on 100% SAF over the course of 12 months; the first was an Airbus A350 in March 2021 followed by an A319neo single-aisle aircraft in October 2021. Increasing the use of SAF remains a key pathway to achieving the industry's ambition of net-zero carbon emissions by 2050. Key statistics outlined in the Waypoint 2050 report indicate that SAF could contribute between 53% and 71% of required carbon reductions.
All Airbus aircraft are currently certified to fly with up to a 50% blend of SAF mixed with kerosene. The aim is to achieve certification of 100% SAF by the end of this decade.
The A380 aircraft used during the test is the same aircraft recently revealed as Airbus' ZEROe Demonstrator - a flying testbed for future technologies instrumental to bringing the world's first zero-emission aircraft to market by 2035.
Source and top image: Airbus