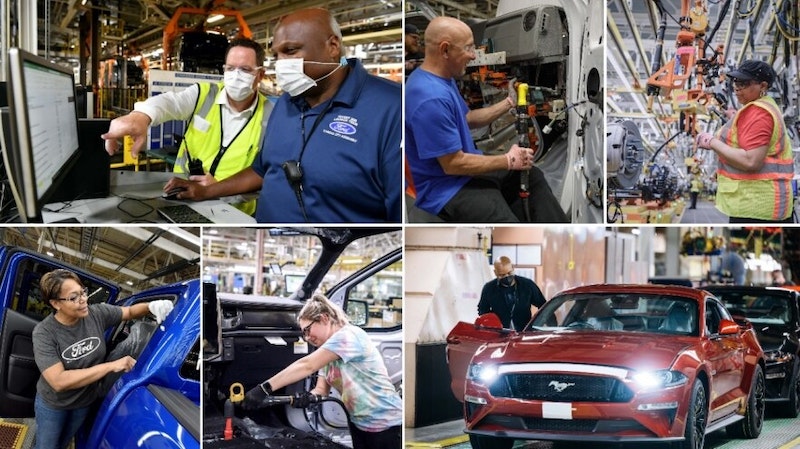 United Auto Workers and Ford Motor Company leaders have announced plans to add more than 6,200 new U.S. manufacturing jobs in the Midwest, convert nearly 3,000 temporary UAW-Ford workers to permanent full-time status and provide all hourly employees healthcare benefits on the first day of employment. These actions - which come more than a year ahead of 2023 contract negotiations - are part of the company's Ford+ growth strategy and include plans for an all-new global Mustang coupe and Ranger pickup for North America, as well as an all-new electric commercial vehicle for Ford Pro customers.
Supported by $3.7 billion of investments in manufacturing facilities across Ohio, Michigan and Missouri, the new UAW-Ford manufacturing jobs are expected to result in the creation of an estimated 74,000 additional indirect non-Ford jobs nationally. For further information see the IDTechEx report on Electric Vehicles: Land, Sea & Air 2022-2042.
"Ford is America's Number 1 employer of hourly autoworkers, and this investment only deepens our commitment to building great new vehicles - from an all-new Mustang to new EVs - right here in the U.S. in partnership with the UAW," said Bill Ford, executive chair of Ford. "I am proud that we are investing in the Midwest and taking real action to provide better benefits and working conditions for our workers on the plant floor."
These actions come a year after the company detailed its Ford+ plan to transform its global automotive business, accelerating the development and scaling of electric, connected vehicles.
Ford plans to invest $1 billion over the next five years to continuously improve the workplace experience for manufacturing employees. While improvements will differ by plant, this is the first phase of workplace changes, with more to come.
The $3.7 billion investment includes:
Michigan has been home to Ford since its founding in 1903, since 2016, Ford has invested nearly $10 billion in Michigan. This announcement is in addition to the approximately 11,000 new jobs Ford announced in September 2021 with its partner SK On as part of a joint $11.4 billion investment.
Source and top image: Ford Motor Company