Sightseeing Vessel is the First in Berlin to be Electrified 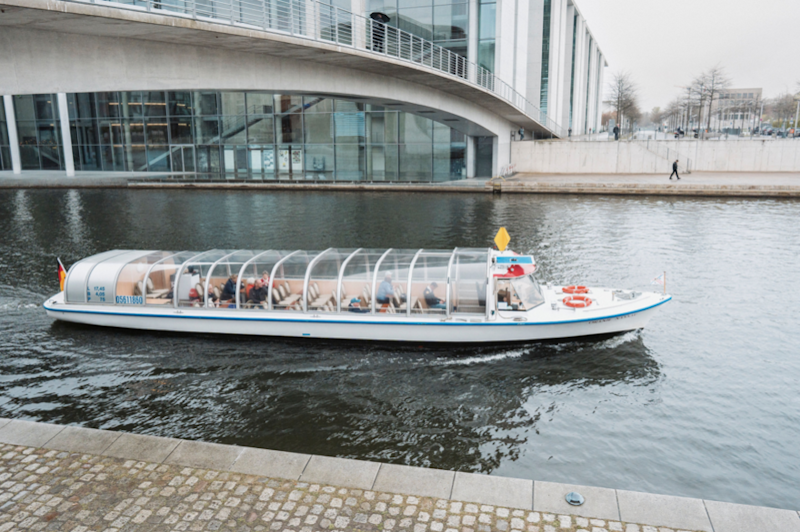 Oranje Nassau, a 20-meter, 55-passenger sightseeing boat and water taxi operating on Berlin's urban waterways was recently put back into service after replacing its diesel engine with a fully integrated all-electric propulsion system by Torqeedo. The Torqeedo Deep Blue 50i electric drive is powered by three Deep Blue batteries with 120 kWh capacity which provide energy for a full eight-hour day at operating speeds, recharging from shorepower connections overnight at dockside.
Passengers and crew have noticed the difference as the boat, originally built in the 1990s, glides silently and smoothly through the water with no diesel fumes, no oil sheen on the water, and no engine noise - just a quiet hum as the vessel accelerates. Electrification also improves local air quality. When the city measured the fine particle pollution caused by urban water transportation, the concentration of fine particles on the inner-city banks of the Spree River was up to 15 times higher than the legal limit. According to the WHO, this is a serious burden on human health; the tiny pollutant particles are known to cause respiratory and cardiovascular diseases. For further information see the IDTechEx report on Electric Leisure & Sea-going Boats and Ships 2021-2040.
Buoyed by the flawless performance of the electrified Oranje Nassau, the managing director of Berliner Wassertaxi, André Siebach, is already making plans to convert the other two tour boats in his fleet with the same Torqeedo propulsion package. He sees it as a smart business decision, yielding much lower operating and maintenance costs. "Besides, we wanted to send a statement," he said. "We wanted to show it was possible."
Siebach pointed out that the comparatively light and streamlined canal boats are perfect candidates for conversion to electromobility. "For the Oranje Nassau project, we were looking for a single supplier who could reliably deliver motors, batteries, and energy management systems for high-voltage systems. And that's exactly what we got from Torqeedo, which offered to supply a complete system with industrial quality components, system integration, and project management."
"It was nice to deal with the same people from the first concept sketch to installation and sea trials," Siebach said. "I had the phone numbers of all the important contacts and could actually reach them at any time."
Axel Büchling, Torqeedo's project sales manager, observed: "Berlin's urban ferries are a perfect fit for electric propulsion since they travel relatively short distances and require a limited amount of propulsion energy per day. Torqeedo was able to draw on our considerable experience in this sector, having installed electric, solar and hybrid systems on scores of inland and coastal craft in other metropolitan areas around the globe."
The German capital has eleven navigable waterways totaling 200 kilometers in length, including the Spree and Havel rivers and the famous Landwehr Canal, and there are more than 40 companies active on the city's urban waters, generating a turnover of 200 million Euros a year and providing many jobs.
Like many other global cities, Berlin has invested heavily in electromobility in recent years. The buses are quieter and more climate-friendly, and electric scooters, hybrid cabs, and electric cars have become familiar sights in the city. In the summer of 2022, the first 200 charging stations for electric autos will be installed in streetlights, with thousands more to follow.
Until now, however, the boat traffic on the Spree River, the city's oldest traffic route, has lagged behind other transportation modes in their embrace of electromobility. That's about to change.
"We can achieve a long-term improvement in the climate on our waterways," commented Berlin's mayor Franziska Giffey. "Berlin wants to be a pioneer here."
The new propulsion system not only has benefits for the climate and Berliner Wassertaxi's bottom line but also improves life for the crew, passengers, and local residents. According to the Berlin Senate Administration, around ten percent of all particle emissions from traffic originate from the vessels that ply the city's waterways - inflicting the same harm to air quality and human health as 120,000 cars.
"In the past, you got really dirty when you were working," said Stephanie Merkel, the vessel's skipper. She smiled. "And now I don't go home in the evening with my head throbbing."
Passengers are also impressed. A visitor from Vienna, who rode the electric boat on one of its first tours, commented: "You can absolutely tell the difference. Berlin has something of Venice: the silence, the gliding along."
About Torqeedo
Torqeedo is the market leader for electric mobility on the water. Founded in 2005 in Starnberg, the company develops and manufactures electric and hybrid drives from 0.5 to 100 kW for commercial applications and recreational use. Torqeedo products are characterised by an uncompromising high-tech focus, maximum efficiency and complete system integration. Torqeedo is part of DEUTZ Group, one of the world's leading manufacturers of innovative drive systems. www.torqeedo.com