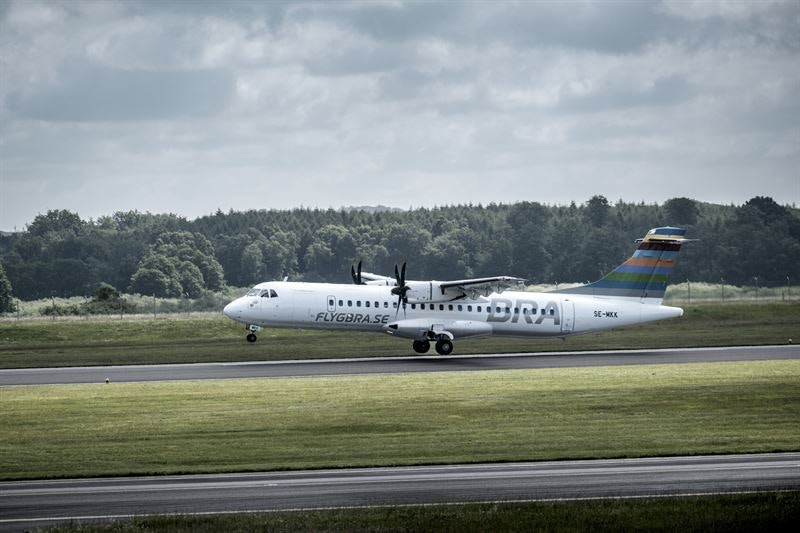 Today, regional aircraft manufacturer ATR, Swedish airline Braathens Regional Airlines and sustainable aviation fuel (SAF) supplier Neste collaborated to enable the first ever 100% SAF-powered test flight on a commercial regional aircraft. The test flight further supports aviation's decarbonisation targets and acceleration of SAF certification. When used in neat form Neste MY Sustainable Aviation Fuel™ reduces greenhouse gas emissions over its life cycle by up to 80%* compared to fossil jet fuel use.
This historic test flight took place in Sweden and is part of the 100% sustainable aviation fuel (SAF) certification process of ATR aircraft that started in September 2021 in cooperation with Braathens and Neste and should be completed by 2025. It has been the latest in a series of successful ground and flight tests on the ATR 72-600 prototype aircraft performed at the beginning of 2022, including flights with 100% SAF in one engine, and today was the first time it was done with 100% SAF in two engines. For further information see the IDTechEx report on Sustainable Alternative Fuels 2021-2031.
ATR CEO Stefano Bortoli, said: "Today is a historic day for aviation. After more than a century of commercial flights powered by kerosene, we are at the dawn of a new era. In recent months, we carried out a series of successful flights with sustainable aviation fuel in one engine. We now decided it was time to perform the first test flight with 100% SAF in both engines. This helps us to certify our aircraft to fly solely on sustainable aviation fuels faster and to enable more sustainable connections as a result. The flight represents a true milestone for the entire aviation industry as it shows that this technology works and can be promptly adopted by many in our industry to speed up the transition to low-emission aviation."
"SAF plays a key role in achieving aviation's emission reduction goals," said Jonathan Wood, Neste's Vice President Europe, Renewable Aviation. "When used in neat form, at 100% concentration as on this test flight, Neste MY Sustainable Aviation Fuel reduces greenhouse gas emissions over its life cycle by up to 80% compared to fossil jet fuel use, and provides additionally non-CO2 benefits through significantly reduced particulate emissions, among others. As a drop-in fuel, it can be used in existing aircraft engines and is compatible with current airport fuel infrastructure. Test flights like this show it is possible to safely fly on 100% SAF and help accelerate the adoption of SAF in aviation."
Per G Braathen, Chairman of Braathens Regional Airlines stated: "As a leading Swedish domestic airline, our sustainability focus started long before any other airline, and this milestone is one of the main pillars and represents a real innovation for the industry. It proved that 100% SAF is the most immediate and effective option we have to reduce CO2 emissions and move faster to a decarbonized industry."
Achieving the milestone was also made possible by Swedavia enabling the SAF to be uplifted to the ATR aircraft at Malmö airport and Pratt & Whitney, closely working together with ATR and Braathens in the preparations of this milestone flight.
"This milestone affirms the opportunity that SAF plays in the aviation industry and is indicative of the strong commitment Pratt & Whitney has made to powering more sustainable aviation," said Maria Della Posta, president of Pratt & Whitney Canada. "We have worked closely with ATR and Braathens to ensure today's successful flight test with 100% SAF."
Today's flight is proof that speeding up the transition to net-zero carbon emissions can only be achieved when all stakeholders within aviation work closely together. It is a milestone not just for Sweden but globally showing that the technology is available and has significant benefits to aviation, today and in the future.
Chief ATR pilot Cyril Cizabuiroz, Jean-Marie Marre, co-pilot, and Pascal Daussin, Flight Test Mechanic, flew the Braathens' aircraft from Malmö a coastal city in southern Sweden to Bromma near Stockholm, which took around 1 hour and 20 minutes. The results of today's flight will be analyzed and released at a later date.
*) Calculated with established life cycle assessment (LCA) methodologies, such as CORSIA methodology.
Neste in brief
Neste (NESTE, Nasdaq Helsinki) creates solutions for combating climate change and accelerating a shift to a circular economy. We refine waste, residues and innovative raw materials into renewable fuels and sustainable feedstock for plastics and other materials. We are the world's leading producer of sustainable aviation fuel and renewable diesel and developing chemical recycling to combat the plastic waste challenge. We aim at helping customers to reduce their greenhouse gas emissions with our renewable and circular solutions by at least 20 million tons annually by 2030. Our ambition is to make the Porvoo oil refinery in Finland the most sustainable refinery in Europe by 2030. We are introducing renewable and recycled raw materials such as liquefied waste plastic as refinery raw materials. We have committed to reaching carbon-neutral production by 2035, and we will reduce the carbon emission intensity of sold products by 50% by 2040. We also have set high standards for biodiversity, human rights and supply chain. We have consistently been included in the Dow Jones Sustainability Indices and the Global 100 list of the world's most sustainable companies. In 2021, Neste's revenue stood at EUR 15.1 billion. Read more: www.neste.com

ATR in brief
ATR is the world number one regional aircraft manufacturer with its ATR 42 and 72 aircraft the best-selling aircraft in the less than 90-seat market segment. The unifying vision of the company's employees is to help everyone, no matter where they are in the world, to connect and develop in a responsible manner. Thanks to the efficiency of turboprop technology and the benefits of the company's focus on continuous innovation, ATR aircraft open more than 100 new routes on average every year, burn up to 40% less fuel and emit up to 40% less CO2 than regional jets. For all of these reasons, ATR aircraft have been chosen by some 200 companies in 100 countries around the world. ATR is a joint-venture between Airbus and Leonardo. For more information, please visit www.atr-aircraft.com

.
BRA in brief
BRA, Braathens Regional Airlines, is a Swedish airline with its main airport at Stockholm Bromma Airport. The ambitious goal of achieving net zero emissions by 2030 makes BRA pioneer in fossil-free aviation. We are achieving this by, among other things, using the most fuel-efficient aircraft on the market, ensuring that 100% sustainable aviation fuel (SAF) is certified as soon as possible and being one of the first to include electric aircraft in our fleet. We have a legacy of sustainable actions:
In 2009, we became the first passenger airline to be ISO14001 certified.
Since 2018, we have offered all our passengers the option to buy 100% SAF for their travel.
Today we are Sweden's largest domestic airline with 25 routes. BRA is owned by Braganza and the Swedish investment company AMF.
Source and top image: Cision