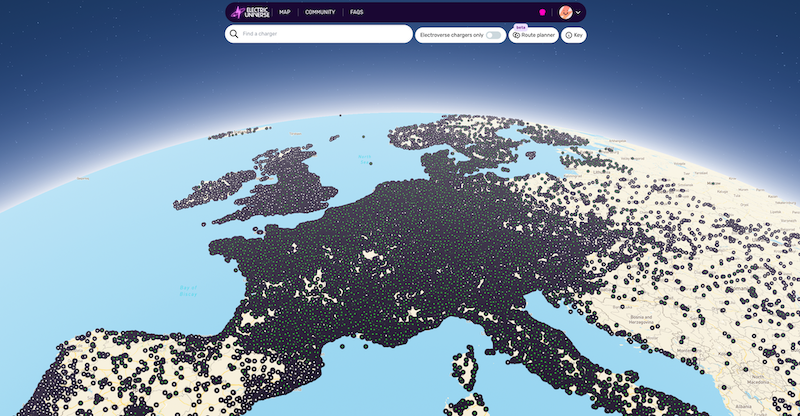 Octopus Energy's electric vehicle (EV) roaming service Electric Universe surpasses 300,000 charge points globally as it rebrands to supercharge international growth. Only two years since launch, it is now one of the world's largest 'virtual' EV charging networks.
Electric Universe (formerly Electric Juice) is making charging electric cars simple, allowing drivers to use just one card and one app to access over 300,000 public charge points from a range of brands across the globe. The breadth of charge points accessible on Electric Universe is quickly expanding internationally. Over 450 charging networks have joined, including IONITY, Osprey, Mer, Fastned, Char.gy and EVBox. Just in the last two months Geniepoint, MFG and ShellRecharge joined the roaming service, adding hundreds more rapid chargers for customers across the UK, with more scheduled to come onboard this year. For further information see the IDTechEx report on Charging Infrastructure for Electric Vehicles and Fleets 2022-2032.
This milestone comes as Electric Universe launches new product features to drastically improve the EV charging experience, including an interactive map showing EV charge points and their availability across more than 50 countries. The new feature prevents 'range anxiety', alleviating fears of running out of power before finding a charger.
The UK currently has around 465,000 EVs**, with the government laying out ambitions for a tenfold increase in charge points by 2030***. More than half of drivers aged 16 to 49 years are now likely to switch to an EV within the next decade****.
Zoisa North-Bond, CEO of Octopus Energy for Business, the business arm of Octopus Energy that created Electric Universe, comments: "Going from 0 to over 300,000 EV chargers in two years reflects our rocket-speed growth - and this is only the beginning for Electric Universe. On the road to greater electrification of our society, drivers are increasingly choosing electric. Being able to charge an EV easily will underpin this shift. We're moving full-steam ahead to grow our EV roaming service even further globally to help accelerate the transition to a cheaper, greener energy future. "
Matt Davies, Director of Octopus Energy's Electric Universe, added: "For many, charging simplicity is the key to making the switch to an EV. The technology we're building with Electric Universe means that the greener and cheaper option will also be the easiest option - positively transforming the EV charging experience for people across the globe today and in the years to come."
** The RAC's 'The road to electric - in charts and data', 2022 estimates
*** Tenfold expansion in charge points by 2030 as government drives EV revolution, Gov, March 2022
**** Over half of younger drivers likely to switch to electric in next decade, ONS Census 2021, October 2021
About Octopus Energy's Electric Universe
Launched in summer 2020, Electric Universe is Octopus Energy's answer to the frequent complaint that Electric Vehicle (EV) drivers need many different apps and cards to use the many different brands of EV charging stations. Electric Universe is making public charging simple by having just one card, one app and one map, with zero added costs or ongoing fees. EV drivers across the globe can now access over 300,000 different charge points with their card and get all the payments added on to their monthly energy bill, whether they're with Octopus Energy or not. Two years on and over 450 charging networks have signed up. Electric Universe won 'Best EV Innovation' at Driving Electric Awards 2021 and 'Best Use of Technology' at UK Business & Innovations Awards 2022. For more information on Electric Universe, head to the Electric Universe website.
About Octopus Energy Group
Octopus Energy Group is a global energy tech pioneer, launched in 2016 to use technology to unlock a customer focused and affordable green energy revolution. It is part of Octopus Group, which is a certified BCorp. With operations in 14 countries, Octopus Energy Group's mission is going global. Octopus's domestic energy arm already serves 3.4 million customers with cheaper greener power, through Octopus Energy, M&S Energy, Affect Energy, Ebico, London Power and Co-op Energy. Octopus Electric Vehicles is helping make clean transport cheaper and easier, and Octopus Energy Services is bringing smart products to thousands of homes. Octopus Energy Generation is one of Europe's largest investors in renewable energy, managing a £4bn portfolio of renewable energy assets throughout the continent. All of these are made possible by Octopus's tech arm, Kraken Technologies, which offers a proprietary, in-house platform based on advanced data and machine learning capabilities, Kraken automates much of the energy supply chain to allow outstanding service and efficiency as the world transitions to a decentralised, decarbonised energy system. This technology has been licensed to support over 20 million customer accounts worldwide, through deals with EDF Energy, Good Energy, E.ON energy and Origin Energy. In December 2021, Octopus Energy Group was valued at approximately $5 billion following a $600 million investment from Generation Investment Management and a $300 million investment from Canada Pensions Plan Investments Board. Both investors back businesses that drive sustainability, promote green energy and tackle climate change. It was the company's third major investment round since launching to the market. For more information, check out our website
Source and top image: Octopus Energy